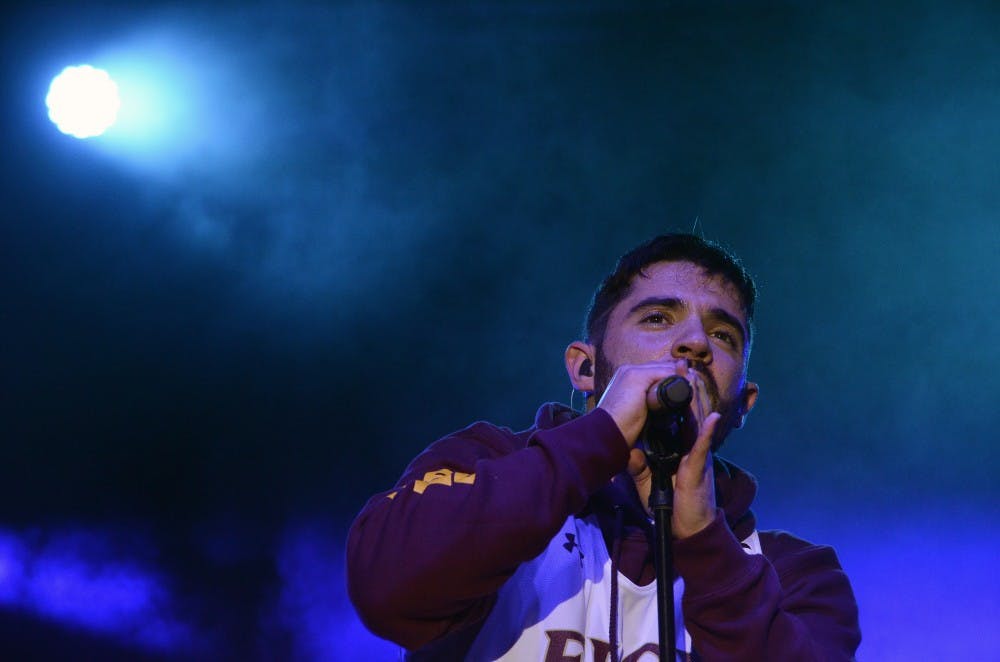 While the rain held off for the duration of Bellion’s performance, almost all the vendors organized by the Student Union Board (SUB) and SGA stepped out because of the rainy weather.

“They cancelled last minute,” said DeeDee Lewis, SUB performance committee member. “It turned out pretty well, but obviously it would have been much better if we had all the vendors that we had scheduled and planned for.”

As students and alumni filed into Colonnades parking lot to wait in line for Dusty Donuts — the one food vendor available — and meet up with friends before the show, freshman Ben Warters set the vibe with his live DJ mixes.

“I saw Jon open for Twenty One Pilots less than a year ago, so being able to open for him is a huge blessing and I’m super grateful for that,” Warters said. “I’m just a freshman — I just showed up — and I’m already out here.”

Warters was followed by opener Clark Beckham, who was the first runner up during American Idol in 2015. Between Beckham’s exit and Bellion’s entrance, the crew took time to dry the set. Bellion walked on stage almost an hour after scheduled.

The crowd was energetic and reactionary. SUB member Jordan Shaw most enjoyed singing to her favorite song “80s Films.”

“I’ve always loved Jon Bellion, so I was really excited that he was going to be our performer this year,” Shaw said. “It was really exciting to be a part of the concert committee that makes that happen.”

After the final song, concert-goers cheered for an encore until the stage was struck. Bellion’s performance will be a conversation piece at Elon University this week.

“The only other homecoming concert I went to was Ludacris my freshmen year, and this one was by far my favorite,” said senior Ryan Durr. “I loved the last song, and I think he played to the crowd."