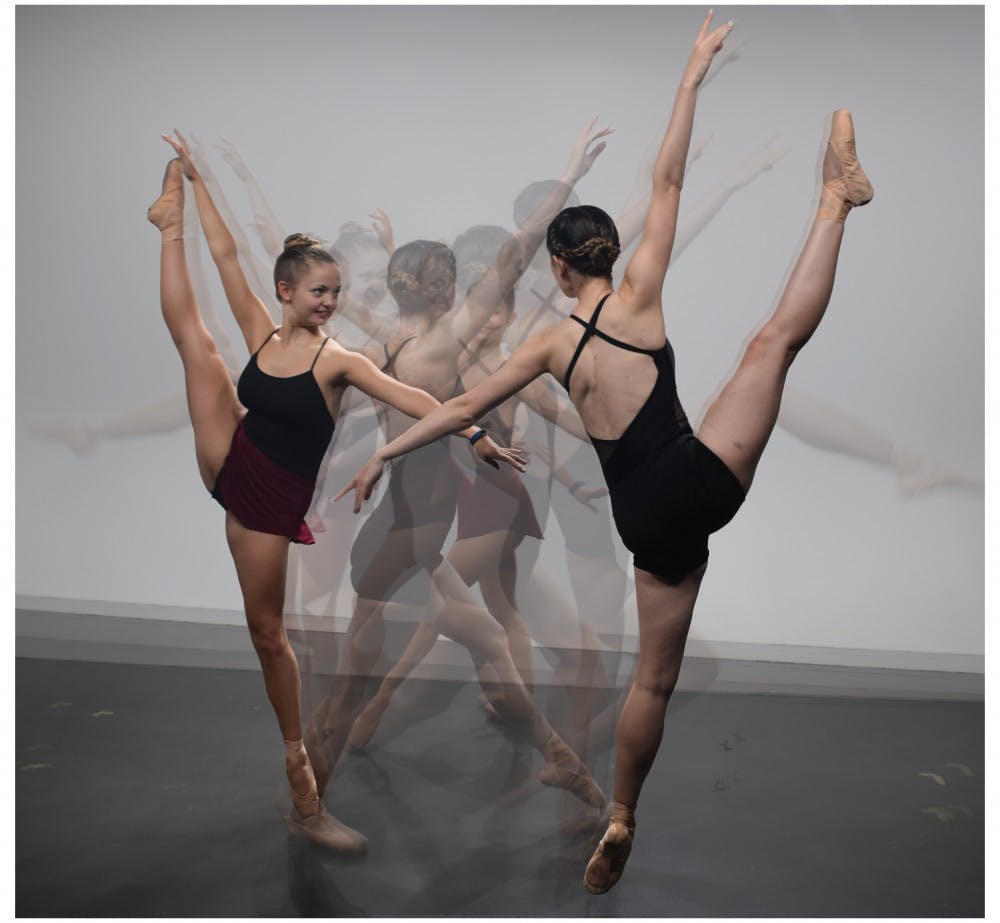 Planning for the concert

Jen Guy Metcalf, assistant professor of dance and artistic director of the show, begins thinking of concepts or ideas for the show about a year in advance. She does a lot of research through websites, books, movies, music and photography to find a concept for her piece and the show itself.

“I gather all that and start to generate movement inspired by my research,” Metcalf said. “I teach that to the dancers not in a linear way. I just teach the movement, and I start to edit and shape the dance.”

While directing the path of the concert, Metcalf, along with faculty in the dance department, also selected student choreography in December 2016 during a salon showcase. From that salon, they decided what pieces of students taking the choreography course would go to national conferences and which will be in the fall dance concert.

“We encourage our students to explore,” Metcalf said. “We place emphasis on crafting choreography and developing movement.”

The opportunity for students to showcase their choreography onstage allows them to have professional experience outside the classroom.

The works in this year’s fall concert are mainly contemporary in dance style and music. The piece Metcalf choreographed is a contemporary pointe piece. Aside from choreographing her piece, Metcalf also mentors the student choreographers and offers feedback so they can improve certain parts of the dance.

“We have helped them to improve their choreographic work and encourage them to coach their dancers in the performance of the piece,” Metcalf said. “Not only do the choreographers improve, but the dancers also develop as artists as a part of this process.”

One of the dances Metcalf is most excited about is called, “Don’t stop (verb ending in -ing),” which is part of the Mad Limbs course.

This course was inspired by a conference presentation and is a play on the words “Mad Libs,” the word game. Renay Aumiller, assistant professor of dance, and Metcalf helped develop and teach this course, which was open to all university students and consists of students with a variety of academic interests, such as dance majors, dance minors, communications majors and business majors. There was no casting for this piece because the cast includes everyone enrolled in the course.

“It’s an example of our scholarship finding its way into the classroom,” Metcalf said.

The performance of this dance will be different every night of the show since it has a focus on improvisation through verbal communication and physical movements.

“I find such great pleasure in the rehearsal process, but what is really exciting is when the students take everything they have learned from class onstage, and you can see evidence that they are truly learning and developing as artists,” Metcalf said.

Pushing and Pulling through dance

While taking the “choreography I” course, junior dance major Brittany Pappaconstantinou remembers using numbers to make dance. She did this through the chance method. By using this, she would get a list of numbers such as her phone or zip code.

“Each number is a sign to movement,” Pappaconstantinou said. “ It would be like zero push arm, one pull leg, two push head, so we would randomly create these phrases based off of that.”

From this, she was inspired to make a contemporary modern duet which she presented at the December salon showcase and was selected as one of two student choreographies featured in the fall concert.

After being selected, Pappaconstantinou began rehearsing with the two classmates she casted for the piece. They rehearsed twice a week for one hour each time last year and this year they rehearse once a week for about an hour and a half. She used the chance method with the dancers to find movement that would fit the piece. She describes being on the choreography side as “nerve-wracking and exciting.”

“It’s hard to make a duet when you’re one person,” Pappaconstantinou said. “It was really difficult for me to plan [the movements] because I didn’t really know how it would look like on their bodies and how it would work out.”

As she rehearsed for the piece, Pappaconstantinou had to learn to detach herself from being a friend and classmate to the dancers and become a choreographer. The mutual respect they all have for each other helped them have a collaborative effort in rehearsals.

“They try to be respectful and offer good suggestions like if they think something would work better or something does not feel right,” Pappaconstantinou said. “They let me know and it honestly it is really nice to work with people who respect you as a friend and as a choreographer because they give you suggestions but also listen.”

Pappaconstantinou was able to receive feedback and guidance from faculty such as Metcalf while making the choreography and rehearsing.

“I think the faculty have really pushed me this year as a choreographer,” Metcalf said. “I would not have been able to do it without them and their encouragement.”

The help from Metcalf especially helped her with deciding the lighting design and other components Pappaconstantinou had never dealt with as a performer.

Contrary to other pieces in the show, Pappaconstantinou’s does not have a specific meaning. There is no relationship between the dancers, but there is a lot of partnering throughout.

“I am interested to see what the audience takes away and what type of meaning they put to it,” Pappaconstantinou said. “It is really just about the structure of the piece that I was thinking about.”

Sophomore Meg Boericke channels the temper tantrums she would throw when she was younger and growing up with her older brother to get into character for Kira Blazek, the guest
artist’s piece.

This piece explores dance through the ages using music of Stevie Nicks, The Ya Ya’s and Hole.

“It’s very like, ‘It’s not a phase mom’ type of mood and feeling and very 90s,” Boericke said. “It’s all about trying to empathize with the audience so, what can I do to make the audience think that I’m angry throwing a temper tantrum.”

Boericke is also in Metcalf’s pointe piece, which is not as upbeat and high energy as Blazek’s. She has to do a lot of compartmentalizing to figure out what she needs to do while performing both pieces since they are so different from each other. With a lot of competition circuits coming up, Boericke is pleased to see what Metcalf is doing with contemporary pointe.

“I feel like it’s much more relevant with the type of dance that’s trending right now, so it’s very edgy,” Boericke said. “You still have a lot of the classical elements, the lifts that we do can be seen in classical ballets, but she takes it in a more modern and contemporary mood, which I think can make this dying art a little more relevant to today’s times.”

As a strategic communications and dance double major, Boericke stays busy studying and rehearsing. She is able to manage her time and balance both areas of study by staying organized, eating healthy and being physically and mentally prepared.

“Trying to study for five different tests at once and being able to keep all the information organized in their respective areas is difficult,” Boericke said. “There are times when you have to forsake a little bit of your social life just to get a few extra hours of sleep.”

Through the challenges Boericke faces with her two majors and dance concerts, she enjoys dancing and giving meaning to the pieces she performs.

“It’s my best form of empathy and communication,” Boericke said. “It’s the reason I am able to connect with my friends because a lot of times I’m put in pieces where I haven’t actually experienced what it is I’m trying to convey, but I have to relate it to my own experience in order to shuffle off the details and break it down to the base emotions.”