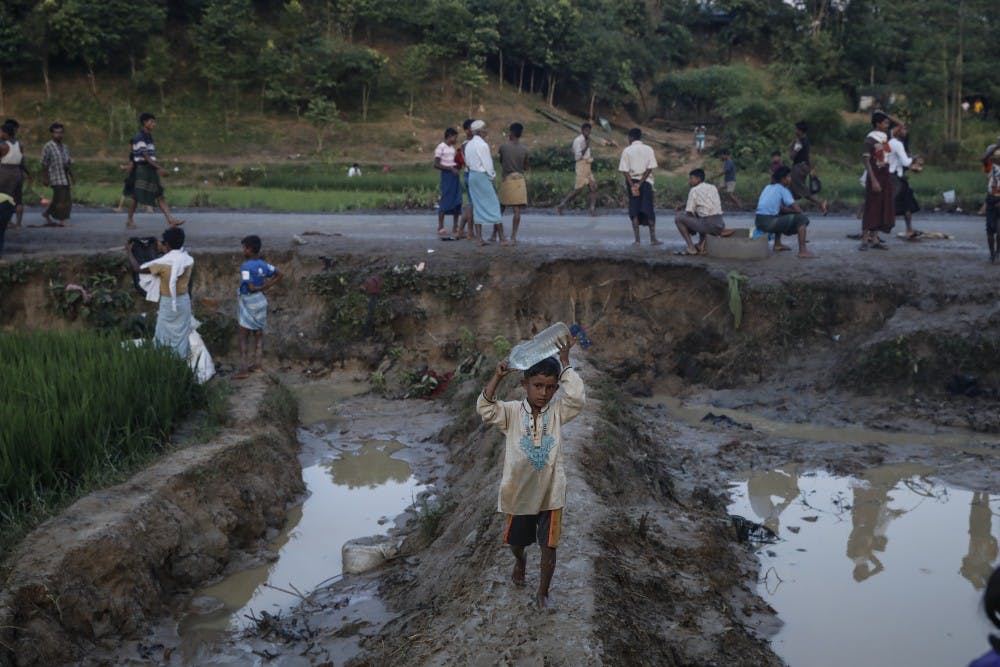 Many of the Rohingya fleeing the violence in Myanmar had travelled by boat to find refuge in neighbouring Bangladesh. According to United Nations more than 300 thousand Rohingya refugees have fled Myanmar from violence over the last few weeks, most trying to cross the border and reach Bangladesh. Cox's Bazaar, Bangladesh, September 17, 2017. (Can Erok/Depo Photos/Abaca Press/TNS)

In this week's Cheat Sheet, Jason Kirk, associate professor of political science and policy studies, explains the Rohingya Crisis. The Rohingya people of the Republic of the Union of Myanmar, previously referred to as the State of Burma, continue to face genocide in one of the world’s worst refugee crisis.

Q: Who are the Rohingya?

A: The Rohingya are a Muslim minority population in Myanmar who are concentrated primarily in the Rakhine state, a western state that borders Bangladesh. They’re not a majority even within this state that they’re concentrated in, but it’s still a pretty significant population.

Q: How has the government treated the Rohingya?

A: The government of Myanmar has really marginalized them for a very long time. It’s been a long-standing issue. They were effectively stripped of citizens’ rights in 1974.

Q: What is the reason for the marginalization?

A: As a refugee issue the Rohingya go back decades. It’s a tough situation where, kind of in waves, never before have we seen the numbers we’ve seen in the last two years. This really sort of intensified about two years ago. There was a bit of international attention to it then. It was overshadowed in a lot of the media coverage by the Syrian and other refugee flows that were confronting Europe.

But actually, the Rohingya refugee crisis has been one of the most significant global refugee crises in recent years.

The government doesn’t seem to want any witnesses to the policy that they’ve been carrying out. Which — not to put too fine of a point on it — is clearly ethnic cleansing. It may even meet the threshold of genocide.

Q: Where are the Rohingya people trying to escape to?

A: The challenge geographically is there aren’t really many places they can go. It’s the Rakhine state’s on the water in the Bay of Bengal. They can cross one border into Bangladesh. Bangladesh is, of course, one of the poorest and most resource challenged countries in the entire world, so it has its own problems; it doesn’t want them. Some of them have tried to flee in boats and they’ve found some safe haven in Malaysia and some parts of southeast Asia.

Q: What has caused this recent round of violence?

What’s happened recently that triggered the latest round of violence, again this is one of the things you see when you have these situations of long-standing repression and marginalization of people, is that a segment of the Rohingya have become radicalized. You have this terrorist organization, as the government calls them, or insurgency/militant organization. They go by the acronym ARSA; it’s a homegrown, “enough is enough” movement that draws from ranking filed disgruntled Rohingya, but apparently has some international leadership.

To some extent, it’s becoming a bit of an international cause that’s receiving some attention from majority Muslim countries. Maybe not to the level where any of these places are really going to stick their necks out for these Rohingya people, but that’s the phase that we may be seeing now where it’s becoming internationalized in a way it hasn’t before. Which usually only pertends bad things happening. That’s when black money flows and maybe arms flows.

Q: What would you say is the best possible outcome for the Rohingya population?

A: The best possible outcome is that they could be treated as citizens by the government of Myanmar; treated as human beings, but we’re so far away from that. The lesson of Burma in the last few years is that the combination of international pressure and rewarding incremental reforms seemed to work for a while, but doesn’t seem to be working lately. It’s not exactly clear if we can get back to that. I think the government of Myanmar needs to be absolutely shamed by the international community.

Q: What could Elon students do in regards to this crisis?

A: Educate themselves. Write to your senators, wherever you come from, write to your congressmen. Tell them you care about this issue, ask what they’re going to do about it and what the United States is going to do about it. Demand of our media and demand of our leaders to take action. People can contribute to the humanitarian efforts in Bangladesh, but don’t imagine that will be anything more than a Band-Aid if the structural roots aren’t fixed.