She Can Lead empowers women leaders on campus 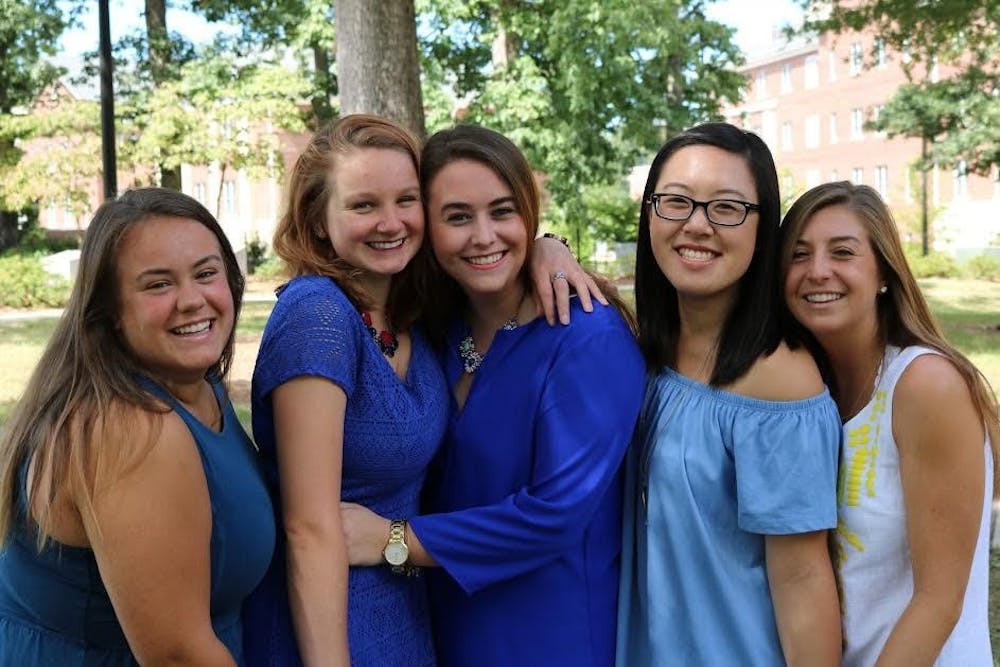 Sophomores Caroline Cirby, Katie Mars, Emily Golden, Joyce Choi and Mollie Sommers all served on the inaugural executive board of She Can Lead this spring. Photo courtesy of Joyce Choi.

Last summer, sophomore Katie Mars received a call from Emily Golden, a friend and classmate, proposing the idea of starting a women’s leadership organization on Elon University’s campus. Now almost a year later, these women — as well as five others they recruited along the way — make up the executive board of She Can Lead.

“We are working on promoting women’s leadership through addressing and examining systemic barriers that women face while pursuing leadership, while also helping people to gain the skills and the traits that they need to overcome those barriers and become leaders,” Mars said.

Though the title is gendered — only including the pronoun “she” — Mars says the club is open to students of all gender identities.

“We really are not exclusive at all about that, but we are really addressing women and their barriers to leadership,” she said.

Mollie Somers, vice president of Finance for She Can Lead, said she was honored when asked to join the inaugural executive board earlier this year.

“Their excitement and drive gave me the confidence to believe I could make a difference for all young women on this campus,” Somers said.

Mars, who is now the Vice President of She Can Lead, is a double major in public health and human services and serves as a Leadership Fellow. She hopes to one day work for a non profit or government agency, such as the Center for Disease Control and Prevention.

The organization is in its first semester on Elon’s campus after completing logistics requirements in the fall. An immediate goal for She Can Lead is extending their membership and outreach.

“We are a brand new club on campus, and so we want to get that word out and say, ‘Hey this is what were doing. This is super important work, come and join us,’” Mars said.

The organization meets biweekly and focuses on different topics each meeting. In a recent meeting, members focused on communication and public speaking skills through presenting about an influential woman in their lives.

“We address all different skill levels and all different attitudes,” Mars said. “We really hope that people come with a thirst for knowledge and this openness to learning about the issues women face when pursuing leadership.”

In the long term, the organization hopes to host various events, including a panel of prominent women speakers on campus and a daylong leadership conference to promote its message and education in the Elon community — and beyond.

After they establish groundwork at Elon, Mars hopes to one day expand to other campuses around North Carolina and even the United States.

She Can Lead has two faculty advisors: Elizabeth Beavers the graduate assistant for Student Organization Development & Marketing in the Center for Leadership, and Dan Faill, director of Fraternity and Sorority Life.

The executive board of She Can Lead thought it was important to have a male perspective in the room when making decisions for the organization.

“ ...We can sit there and talk about all these good ideas and not even realize that it could be marginalizing to the men in the room,” Mars said. “Even the title, She Can Lead, is very gendered, so how can we open that up to a bigger group of people? Having a man sit with us was very helpful.”

At the end of the year, the organization will welcome new executive board members. Mars is excited to see the club she helped create evolve as it is passed on to other passionate individuals and see where they take it.

“[You can see] our heart and soul in the organization,” Mars said. “We’re hoping to foster some other hearts and souls to be right there with us.”