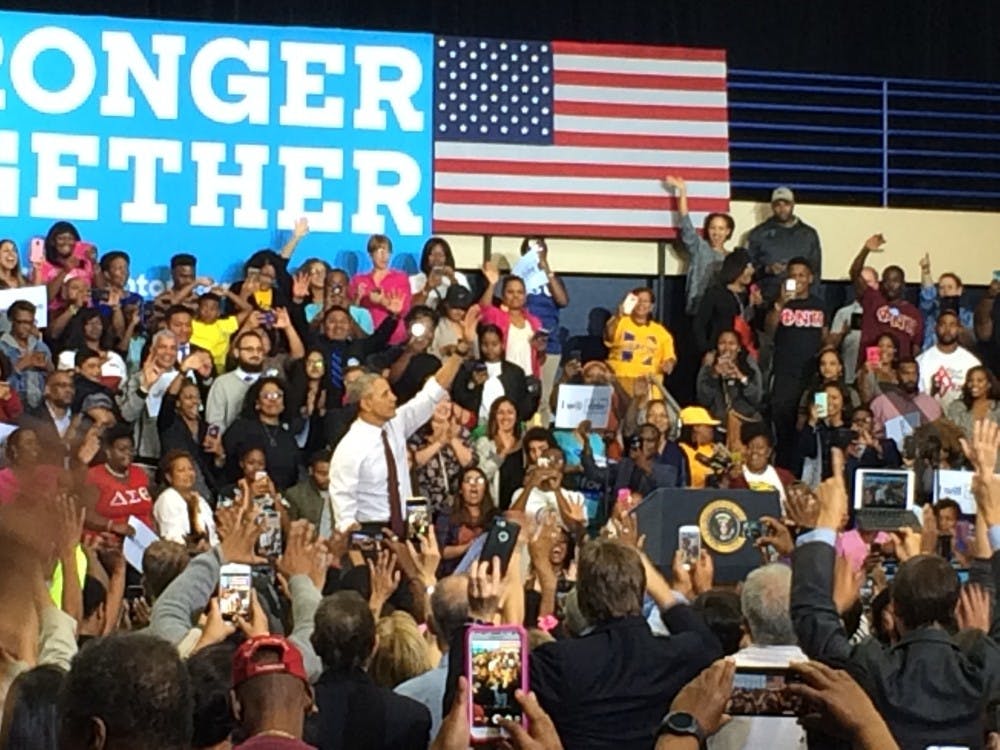 FAYETTEVILLE — When President Barack Obama campaigned for Democrat Hillary Clinton at Fayetteville State University Friday afternoon, a protestor disrupted his rally for a minute or two.

A man who appeared to be a military veteran peacefully stood up and held a Donald Trump campaign sign. As the crowd of 4,500 witnessed the disruption, upset attendees chanted “Hillary” and shouted at the protestor. Deviating from the typical, “Don’t boo, vote,” line, Obama shouted a different message directed at his supporters.

Once Obama regained control, he told the audience the protester was there to support his preferred candidate and was not causing harm. He added that the man should be respected for his military service.

Throughout his rally, Obama focused on the need to move on from a bitter election cycle and a deeply divided political climate.

“If we lose focus, we’re gonna have Donald,” he said.

Amber Coleman, a Raleigh resident and junior at Fayetteville State, said she appreciated Obama’s efforts to hold a more positive event. Coleman was booing initially but stopped after watching Obama try to redirect the crowd’s attention.

“I was one of the ones encouraging everybody to boo, and then I listened to what he said,” Coleman said. “We do lose focus sometimes and focus on the negatives instead of the positives ... We need to pay more attention to what we’re saying about Hillary than the negatives about Trump.”

Obama encouraged his supporters to pay attention to the issues at stake in the presidential race. He spoke passionately about Clinton’s record under his administration as secretary of state and called her “loyal"  and “outstanding in her job.”

He consistently tailored his speech to young voters and reminded them about Clinton’s policies on free tuition and affordable healthcare. Instructing attendees to register by Saturday to make sure they are eligible to cast their ballots, Obama talked about the need to elect Clinton so she could build on the progress he made as president.

“I need you to vote. America needs you to vote because we’ve got to finish what we started eight years ago,” he said.

He told the crowd too much was at stake for people to sit the election out. He described Republican Donald Trump as “uniquely unfit” and said the United States could not afford to operate under a Trump presidency.

“Right now, you can reject the mean-spirited politics that would take us backward,” Obama said.

Obama’s optimistic message comes at a time when Clinton's poll numbers have been going down.

The emails emerged during an investigation into accusations that former congressman Anthony Weiner had sent sexual text messages to a 15-year-old girl.

Kara Carter, a Republican National Committee spokeswoman, said Comey has made a clear indictment against Clinton’s judgment. She added it is too late in the election for Obama’s words to make a difference.

Though Obama spent much of his time drawing contrasts between Clinton and Trump, he also weighed in on important North Carolina races. He accused Gov. Pat McCrory of suppressing minority voters. He was also highly critical of Sen. Richard Burr.

“He’s a perfectly nice guy to talk to, but he seems to be willing to say anything just to get elected,” Obama said.

Toward the end of his rally, he stressed the importance of winning North Carolina, a critical swing state that could seal a Clinton victory.