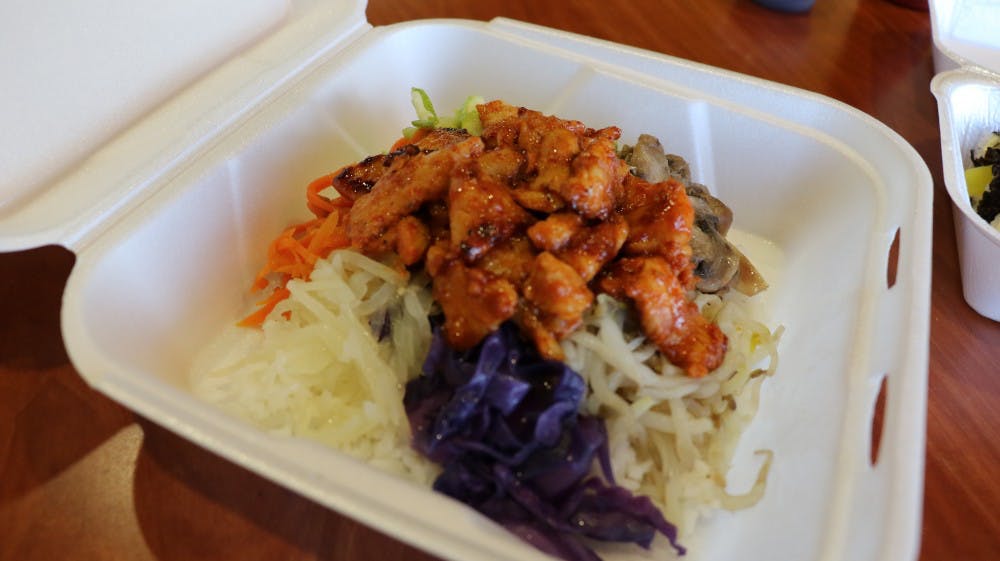 
Mixed Rice offers bimbimbap, a bowl of warm white rice topped with sauteed and seasoned vegetables, chili paste and a choice of meat.

One of the students in the picture, Meredith Carey ’15, said she and her roommates gifted the photo to the restaurant owners to thank them for the sense of home they provided at every visit.

“We all had such busy schedules that rarely overlapped that it was ‘our place,’” she said. “So, we would escape Elon and go visit Miss Susan and leave with a full heart and stomach.”

Jihe, daughter of Susan and one of the owners of the family-owned restaurant, said creating a sense of home is one of their priorities.

“We are a local, family-owned, small, no-frills kind of place,” Jihe said. “But we hope that any Elon students who stop by feel like they are eating at home, even if they have never tried Korean food.”

But the atmosphere is not the only reason guests often return.

Mixed Rice is one of few restaurants in Burlington that offer authentic Korean cuisine at affordable prices. The food is freshly cooked at the store everyday with family recipes passed on by Susan’s mother.

The menu features Korean classics including bimbimbap, which literally translates to “mixed rice,” the name of the restaurant, a bowl of warm white rice topped with sauteed and seasoned vegetables, chili paste and a choice of meat.

The menu also includes duk-boo-kee, which is a spicy rice cakes and spicy glass noodles served with barbecued chicken, pork or beef. All items — including entrees which come with a choice of a spring roll or egg roll — are under $10.

“It was so fresh and healthy,” Carey said. “Sometimes we were there twice a week.”

The store-front restaurant opened in March 2015 after Jihe’s family moved to Burlington from New York. Jihe said the restaurant fulfills a need in the market for authentic Korean take-out cuisine.

“Most Korean restaurants are usually sit-in and pricier,” she said. “Mixed Rice is driven by take-out options and is much more affordable, while also being a healthier alternative to other take-out options.”

Jihe encouraged students who haven’t tried Korean cuisine to visit and try some of their staples to experience something new.

“It’s understanding that every country is different,” she said. “They have different snacks, different drinks and a different taste altogether.”

Carey added that in addition to trying new things and enjoying the food, the restaurant ultimately leaves students with little treats to carry them over to the next week and she credits this to the smiling faces on the other side of the payment counter.

“Being away at college, it was nice to have a mother’s love and a warm smile greet us when we would grab dinner together,” she said. “They are classy people working hard with incredible