Equestrian Team works to train horses and compete in shows 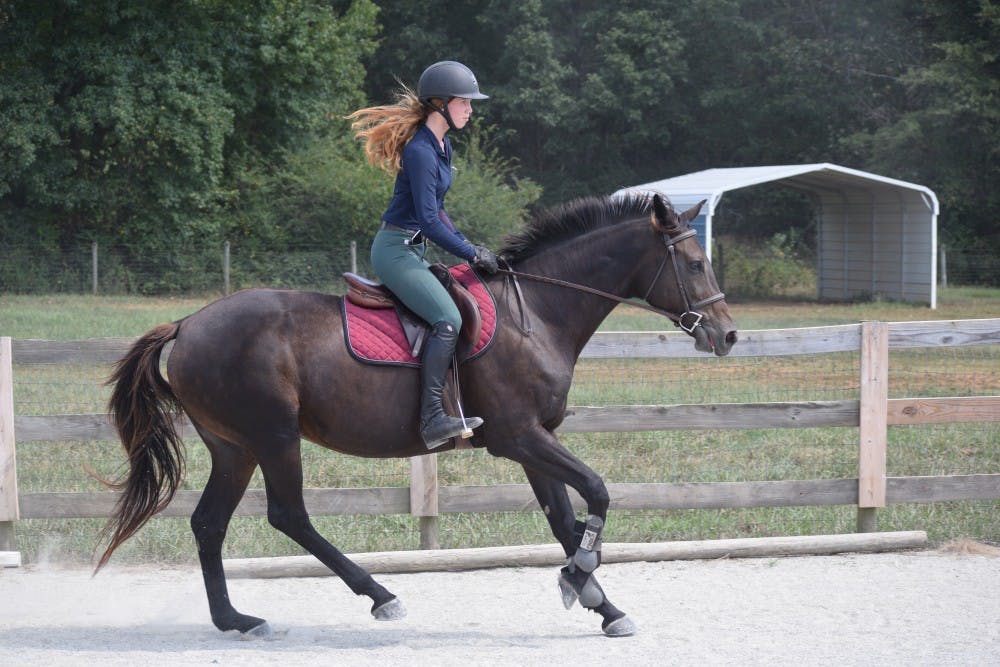 Each week, a group of 20 students travels 30 minutes each wayto Rosewood Farm in Mebane. The distance, though, is worth it to the Elon University equestrian team to participate in riding lessons, care for their horses and prepare for horse shows against other collegiate riders.

The club team is a group of dedicated riders, all passionate enough about horses to come together and do what they love.

What used to be one large team is now separated into two: dressage and hunter/jumper. Hunters in competition must complete a sequence of jumps in specific order and are placed based on whether the horse knocks over a jump or trots quickly. Dressage is judged on how well riders and horses execute a series of movements without jumping.

“I tried everything,” said sophomore Cassi Waciega. “I felt that dressage was less of a subjective discipline to ride in, because when I rode hunter/jumper and eventing, a lot of the judges tended to base the placing on whether or not they thought the horse looked pretty, rather than how well the horse and rider worked as a team.

“In dressage working as a team is not possible because every movement is judged. It’s not just your overall performance.”

Over the last several years, the hunter/jumper club team has primarily competed against the likes of Wake Forest University and High Point University, but this semester they enter a new division: where they’ll play schools such as the University of North Carolina school system, Duke University and East Carolina University.

In addition to a new division, the team also welcomes a few new members.

“Since we’re a club sport, we can’t make cuts, so we have a show team,” said sophomore Maddie Pierce, president of the hunter/jumper team. “Everyone has lessons every week, but the show team is a little smaller. We pick and choose whoever’s doing really well in lessons or showing initiative or being good team sports, and we take those riders to shows.”

Last year, the dressage team dropped in popularity and numbers, so sophomore Alex Gaither, president of the dressage team, tried to recruit new members last semester. This year she hopes to build an atmosphere that promotes skill development in both members and the horses.

“I think this semester is going to be really focused on building team bonding,” Gaither said. “Right now, we don’t have any shows yet. But for us, showing is great, but it’s not the first priority. I feel like the first priority is getting to know each other and the horses and developing your riding.”

This semester offers many new opportunities for Pierce’s team. With 20 horses this year, there’s a chance for more girls to join the team and more opportunities to ride and improve. The hunter/jumper team used to be divided into A and B teams, but has since merged to train at the same barn, united and as a singular team.

This semester, their team will compete in five shows, the first to take place in two weeks at St. Andrews University in Laurinburg, North Carolina. Pierce and the coaches look at teamwork, ability and lesson work to determine who is ready to participate in shows.

Pierce takes care of Krizzie at the stables after a day of training for Elon's equestrian team. Photo by Diego Pineda, Photo Editor.

Many of the team members have been riding since they were little, and some bring their horses to the barn to ride. But many others join the club completely new to riding, but just as interested, Gaither said.

For the equestiran team, riding and their weekly trips to the barn for lessons becomes a stress-reliever, as seeing their horses for even a few hours at a time can instantly improve their moods.

Aside from all the accolades and horse shows they’ve participated in, the Elon equestrian teams have created strong bonds of friendship that helped strengthen these girls’ college lives while simply doing what they love.

“Riding has always been a part of my life, and I can’t ever see myself not riding, so getting plugged into a group of people that love the same thing as me — an instant group of friends — was really cool,”  Pierce said.