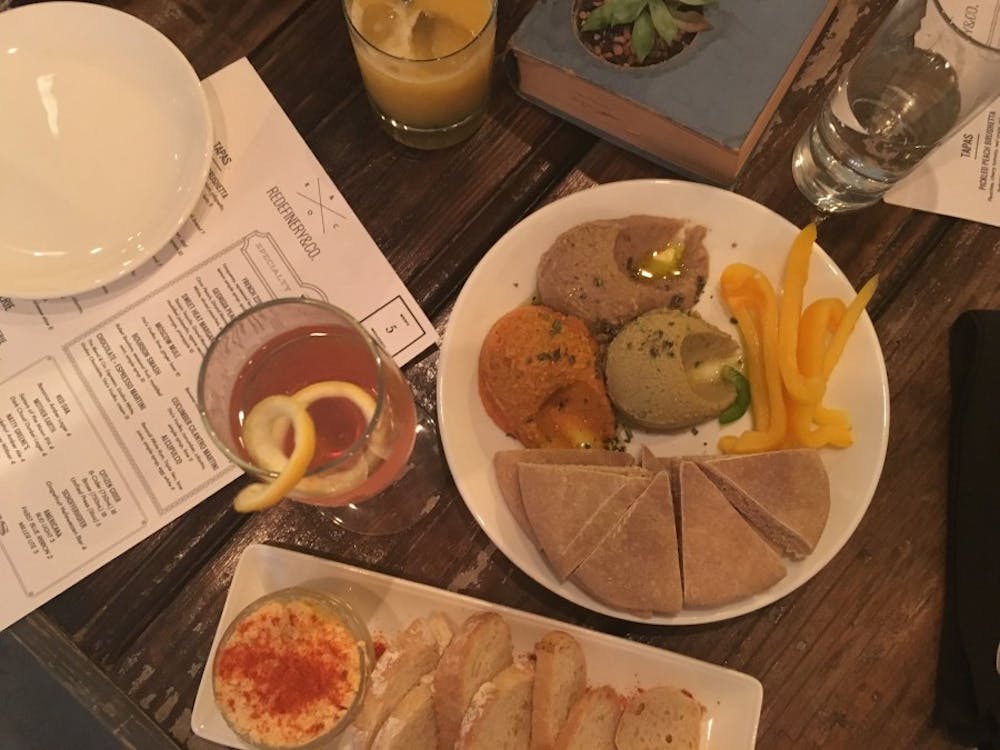 Walking into Redefinery & Co., you’re immediately hit with a wave of trendiness. The dimly lit space is open, with cozy couches, a few tables, vintage art and black-and-white films projected on the wall.

Patrons are casually sipping on classy cocktails and eating appetizers called tapas. It’s like something out of New York City, but outside the window is Downtown Burlington.

“The idea came from not having any casual bar to hang out in Burlington,” said owner Joe Coffey. “A place to go with friends and have drinks, something to eat. A lot of it came from our traveling to New York and bigger cities.”

Located at 220 E. Front St., Redefinery & Co. opened July 10, and Coffey said the business has been overwhelming and packed almost every night. This “bar” gives a classier alternative to the typical West End Terrance, Tony’s Pub-N-Subs and The Fat Frogg scene.

After stepping into the establishment, patrons sit down at a table embellished with an old book crafted into a candleholder with dangling lights and terrariums overhead.

The menu is filled with specialty cocktails, ranging from the classic “Moscow Mule” to the more adventurous “French 220,” made of Tanqueray gin, squeezed lemon, lavender simple syrup and sparkling rose.

There is also beer on tap and an extensive wine list.

For those interested in munching, there is a list of tapas for sharing, such as pickled peach bruschetta, a hummus trio and smoked pimento cheese. Though serving sizes are on the smaller side, each bite is delicious and makes for a good pick-me-up.

Three tapas and four drinks came to about $18 each for four people, which is reasonable for the high quality of food and service.

According to Coffey, 80 percent of the food is locally sourced using espresso from the Blend & Co., bread from the Village Bakehouse in Saxapahaw and local produce delivered by farmers twice a week.

“If they’re locally grown, they’re still more healthy than getting it from a distributer,” Coffey said.

The seasonality of purchasing local allows for a changing menu, and patrons should see a transition to a fall menu around the beginning of October.

“Some of the things will stay,” Coffey said. “We have some staples that people really like, but we’re going to change the menu and drinks out seasonally for a drastic change. It keeps things interesting.”

But that $5 is immediately taken off the first tapa ordered by each patron, so the member is reimbursed. The membership aspect also gives the place an exclusive feel.

New chill vibes coming from eateries such as Redefinery & Co. and the Blend & Co. mark just the beginning of a revitalization of downtown Burlington.

“We were always trying to redefine the downtown with what we were doing and a wider winery, so we kind of just made up the name Redefinery and it works,” Coffey said.