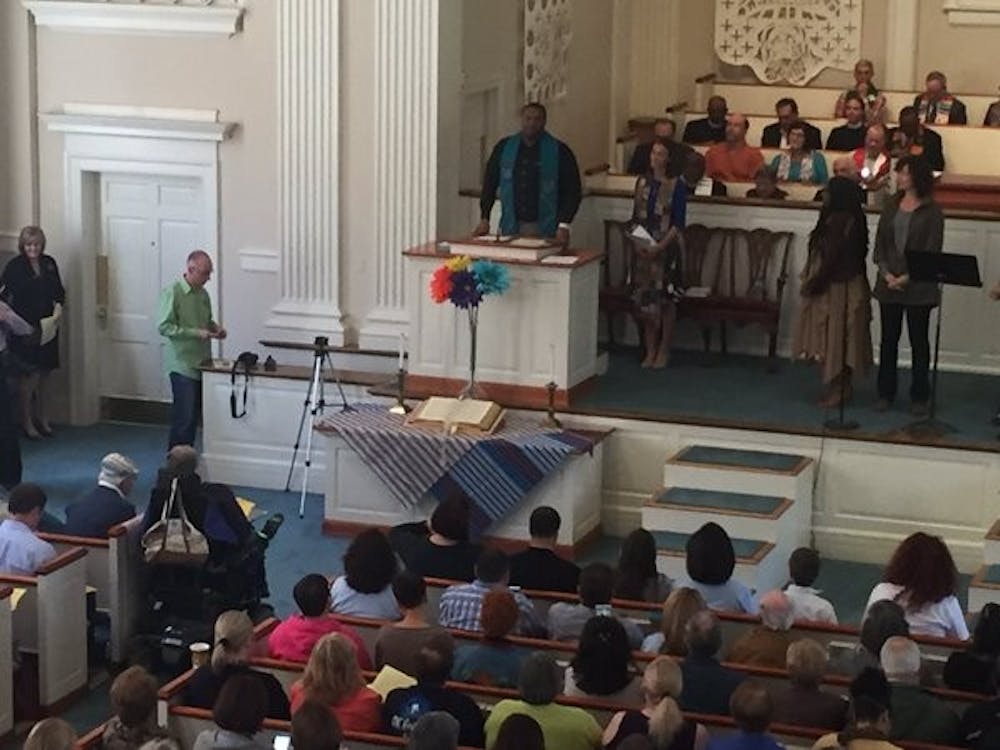 GREENSBORO - Hundreds of people packed College Park Methodist Church for the Greensboro rally against House Bill 2 as members of the North Carolina community continue to speak out against North Carolina's newest law.

The bill, which passed on March 24 in an emergency legislative session of the N.C. General Assembly, has faced criticism from many who say it restricts rights of the LGBTQ community.

The bill restricts local governments from passing their own anti-discrimination ordinances and repealed a Charlotte ordinance that would have protected transgender people who use the bathroom they feel matches with their gender identity rather than their biological sex.

Supporters of HB2 say the bill strengthens personal security and protects women and children from sexual predators, while opponents say the bill unfairly restricts local governments and is discriminatory towards the LGBTQ community, particularly transgender individuals.

The Sunday afternoon rally filled the church for a different kind of service as the standing room only crowd listened to testimony from more than a dozen representatives of the local community, including Callie Schmid.

Schmid is a trans-woman who transitioned six years ago. She said HB2 hurts her and her community so she needed to do whatever she could to spread the word.

"This law, this atrocity, has put us at a very, in a very dangerous position, we're at risk for random violence and we need to speak out and we need to get these things repealed," she said.

As for the issue of bathrooms, Schmid said she and other trans-people have been using the bathrooms that match their gender identities for years and haven't faced many problems. Now though, she's concerned the attention from the bill will bring out bigotry, encourage people to police those bathrooms or target members of the transgender community.

It's a fear that led Schmid to reluctantly step into the spotlight.

"I"m so far out of my comfort zone it's unbelievable," she said. "I really don't want to come out to people on television but you know what, if I have to to save our community this is what I have to do."

Many North Carolina businesses and institutions have come out with statements in opposition to the bill, including Elon University.

The university released a statement when the bill was passed reassuring students that Elon's anti-discrimination policies were unaffected by the bill as Elon is a private institution. Still Monique Swirsky, Elon sophomore and president of SPECTRUM, feels like the university's statement didn't go far enough.

"I think that Elon hasn't done enough to speak out against HB2," she said. "We released a statement as an official university statement that said we have 90 universal bathrooms and we stand against this and I don't think transgender or the acronym LGBTQIA was anywhere that statement."

Swirsky was among a handful of Elon students that attended the rally in Greensboro. She said she made the trip from campus because she feels these rallies can truly make the effect she wants: encouraging more voters to speak out against the bill and informing the public.

Regardless of the bill's future, House Bill 2 has made North Carolina a talking point across the country.