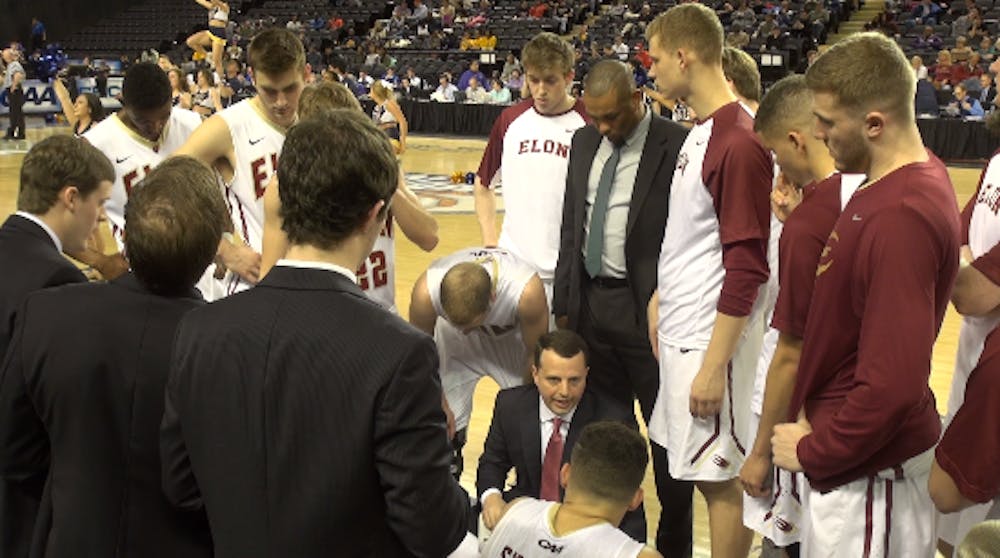 BALTIMORE-- Down 17 to Drexel midway through the first half, the Elon men's basketball team slowly but surely chipped away. But like most Phoenix comebacks in recent weeks, it ended up just short, as a Luke Eddy jumper bounced off the front of the rim in the waning seconds as Drexel edged Elon 57-56 in the quarterfinals of the Colonial Athletic Association Tournament.

"It was a ball-screen for me and I was trying to get two points," Eddy said. "I could have done anything, that's how most of our end-of-the-game plays work. And it didn't happen, I left it short."

Down 56-55, Drexel's Terrell Allen knocked down a jumper from the free throw line with 25 seconds left to give Drexel the lead and Elon one last shot at the win. Eddy got the ball and called timeout with 13 seconds remaining to set up the last opportunity.

Just minutes earlier it looked like the Phoenix had risen from the ashes to complete the comeback. Elon catapulted ahead 55-51 on a Tyler Seibring 3-pointer and an Eddy layup, but scored only one point over the final 4:06 and watched its lead slip away.

"When we were chipping away in the second half and eventually took the lead, I think we as a team, we thought that we could finish the game," Elon forward Christian Hairston said. "They didn't quit... and eventually it just came to blows at the end of the game."

"We got down early, but nobody really got down on our team," Hairston said. "We knew that we could come back and we made it a game. Unfortunately we weren't able to win the game."

Elon slowly battled back, cutting Drexel's lead to 34-21 at the half.

Coming out of the break, Elon went on a 6-0 run to cut Drexel's lead to seven before going back and forth over the next several minutes to set up the close finish.

Tavon Allen scored a game-high 17 points on 6-of-14 shooting and Terrell Allen had 11 points, including the winner, for the Dragons.

Drexel will play Hofstra in the CAA semifinals Saturday at 12 p.m.

Eddy led Elon with 11 points on 5-of-9 shooting and guard Dmitri Thompson added in 8 points and three steals.

With the loss, the Elon careers of Tanner Samson, Tony Sabato, Wes Brewer and Sam Hershberger come to a close as the winningest class in school history.

"Those seniors met a lot to us," Eddy said. "They won a lot of games and we really respect them and we never want to see them leave this program"