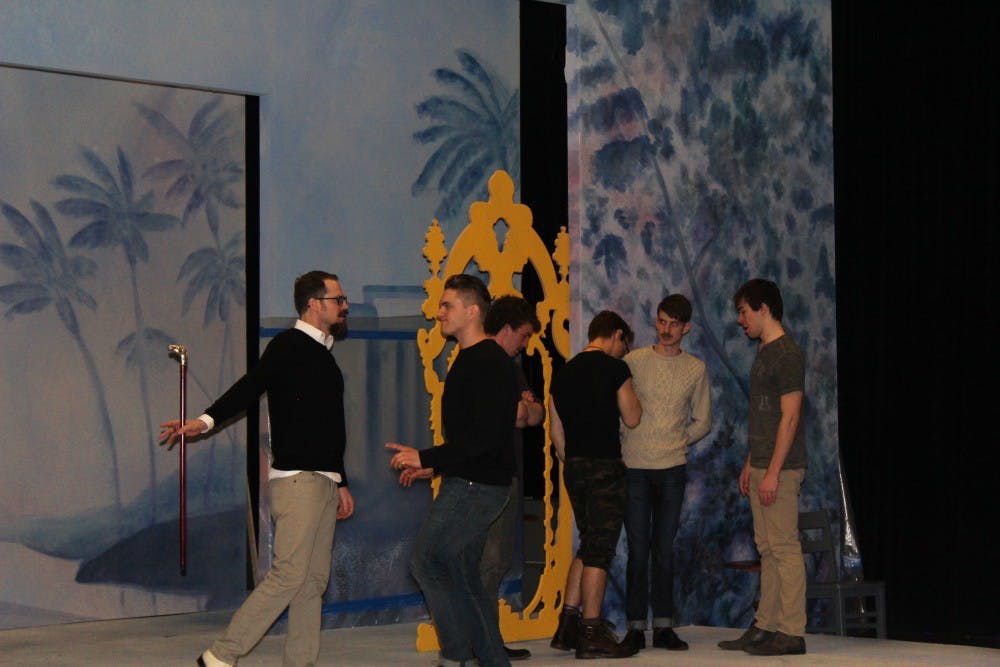 
The cast of ‘All’s Well That Ends Well’ rehearsed for the play as a Winter Term class. The show will run from Feb. 3-6.

In a Shakespearean play that likens love to war, a unique rendition created by the cast and crew of Elon University’s Department of Performing Arts’ Winter Stock Theatre stayed true to the traditional tale of “All’s Well That End’s Well” while adding innovative elements to enhance the storytelling for modern audiences.

With more performances from Feb. 3-6 in Scott Studio’s Roberts Studio Theatre after being shown for three days during Winter Term, Elon’s version of Shakespeare’s “problem play” — meaning it’s not classified as a comedy or tragedy — aims to entertain and interact with the audience, by seating audience members on three sides of the stage and surprising viewers with involvement.

“All’s Well That Ends Well” follows Helena, a low-born ward of Spanish countess, who is in love with a man who has no interest in her — the countess’ son Bertram. With a few rejections, Helena still continues to pursue him as a war breaks out in Italy, keeping a theme of the similarity of love and war.

The audience seemed to enjoy the show as everyone roared with laughter from the superb characterization, acting choices and the roles overall.

The small black box theater wasn’t filled entirely, but that had more to do with the snow and ice and it being a Sunday.

It seemed as if the two main love interests broke characters a tad, as they both burst into laughter when the remainder of the cast exited the stage during the first scene. But though the giggle didn’t seem intentional, did not affect the production as a whole.

The cast all handled the language and its pacing well. They knew their lines thoroughly and didn’t mess up any of the complicated dialogue, which was especially impressive considering how difficult Shakespearean English can be.

The cast and creative team broke down the complex wording from Shakespeare’s original work for an audience unfamiliar with the language to easily understand the story through physical movements, sets, music and costumes.

Freshman Samantha Potak, assistant Director and enjoyed her time not only working on the production, but also getting to watch the play and to see it from an entirely different point of view — the audience perspective.

“I never knew I could laugh at a Shakespeare show,” Potak said. “The cast does a great job at helping the audience understand.”

In addition to being a well-executed Shakespearean play done by students, it was a hilarious play that had the entire audience in stitches — giggling at funny lines of dialogue, audience interactions, stage cues and body movements.

Though the show usually takes place in the 1600s, the Winter Stock Theatre’s version takes place in World War II. The transitional music helped to set each scene as well as the mood of the location and change of era in which “All’s Well That Ends Well” takes place.

For primarily working on the play over the duration of the Winter Term “Winter Stock Theatre” course, the entire production was very well done in all aspects.

This laugh-out-loud play was a huge hit for the entire audience. All of the physical comedy helped the audience further understand complex Shakespearean language and also entertained the audience from start to finish.

“I think it’s great. It’s really funny,” said senior Jacqueline Gravely. “Even though I didn’t understand half of what they were saying, they did a good job [explaining it] physically.”

The plot may have had its problems, but the production certainly did not.