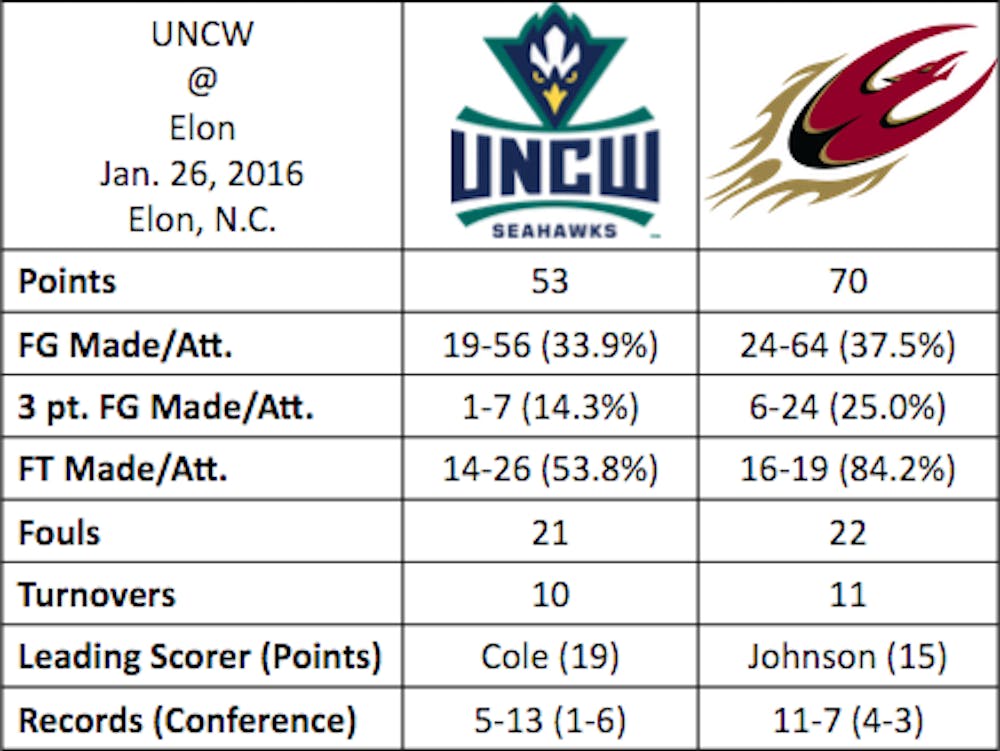 The Elon University women’s basketball team displayed a tight defense and had a solid game from the foul line, defeating the University of North Carolina at Wilmington 70-53 Tuesday night.

Elon used its depth to its advantage in a Colonial Athletic Association affair, sweeping the Seahawks and winning both games in its homestand. The Phoenix (11-7, 4-3) had seven girls come off the bench for a combined 14 points and 18 rebounds, while UNCW only had seven girls suited up to play.

After Elon’s game against the College of Charleston Friday, in which Elon did not make a single shot from behind the arc but won, the Phoenix came out strong in the first quarter, with both junior guard Lauren Brown and freshman guard Nikki McDonald sinking 3-pointers. Junior guard Maddie McCallie also had two 3-pointers of her own that allowed her to snap out of a huge slump of being 0-26 from the three-point line.

“When you go for that long of a stretch it can be a mental nightmare and it’s hard to get out of that slump mentally until you get that monkey off your back and you hit that first shot,” said Elon head coach Charlotte Smith. “I was glad to see that it went down for her tonight.”

Sophomore center Malaya Johnson was the focal point of the offense, tying her season-high with 15 points.

“For a lot of the teams we have an advantage inside,” Johnson said. “We press in practice and getting ready for games, first to work the ball inside and give us a chance to be physical and go in and score.”

Being physical was another key to this gam for Elon, as the Seahawks (5-13, 1-6) only had two players coming off the bench. The physical play led to UNCW getting into early foul trouble and committing 21 fouls in the game. Elon converted on those fouls, shooting 16-19 (84.2 percent) from the free throw line.

Junior guard Essence Baucom and McDonald added to Elon’s win with 12 points each and a combined 12 rebounds. Senior guard Shatia Cole for UNCW (5-13, 1-6) led the Seahawks with 19 points.

“It’s a great boost for us because you wanna play well at home,” Smith said. “Seeing as though we played tonight at home, now we take this show on the road. Hopefully, that has generated some mental confidence for us going into the games this weekend.”