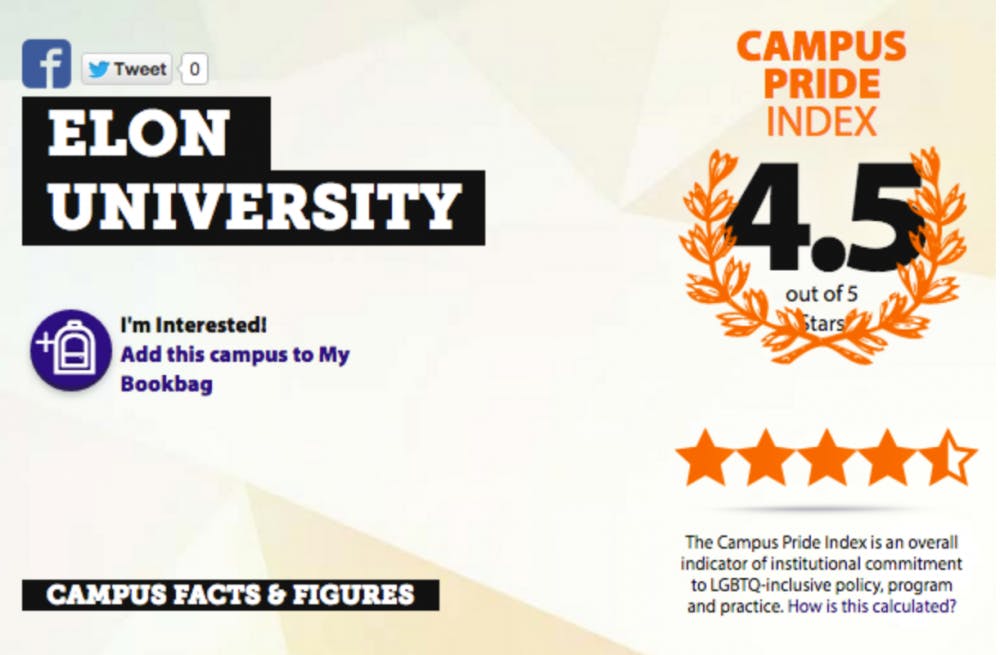 Open, mark as unread, send to spam folder. Elon University staff member Matthew Antonio Bosch spent the morning of August 27, 2015 as he would any other — checking his email. But as he opened one email in particular, he got a lump in his throat and re-read the email over and over again in a state of shock.

Elon had been named one of the top 25 LGBTQ-friendly college and universities in the country by Campus Pride Index.

Since being named director of Elon’s Gender and LGBTQ Center (GLC) in Fall 2013, Bosch has worked to improve the campus climate for LGBTQIA students at Elon. His efforts have included instituting a mentorship program for students transitioning into college, regularly communicating with outside organizations like Greek Life and athletics and trying to extend safe, LGBTQIA-friendly spaces outside the scope of the GLC.

And all of these efforts culminated in one thing: This email detailing Elon’s recognition on Campus Pride Index, a tool that allows prospective LGBTQIA students to learn about campuses where they can expect to feel welcome and comfortable.

“Since being hired in Fall 2013, I had hoped that one day Elon could get somewhere into the Top 100, but in just 2 years, going from #370 to #110 to #15 has been absolutely unreal,” Bosch said. “It doesn’t mean Elon is perfect, but it does signify a unified community response to LGBTQIA inclusion, and that is powerful.”

The Campus Pride Index assesses colleges and universities in eight primary areas: policy inclusion, support and institutional commitment, academic life, student life, housing and residence life, campus safety, counseling and health, and recruitment and retention efforts — all as they pertain to LGBTQ students. Campus Pride gives a college or university a rating out of five stars in each of these categories and combines the eight ratings to get an overall friendliness score. The site then uses this score to determine which colleges and universities fall within the top 25.

Bosch explained that he had to check “no” on several questions regarding trans-inclusive student health policy, because Elon doesn’t offer a student health insurance plan at all.

“Actually, since the release of the rankings, our entire Health and Wellness division received two LGBTQIA trainings: one from the GLC [and] one trans-specific health workshop,” Bosch said. “It’s just that the rankings were released prior to our already scheduled LGBTQIA trainings, so they couldn’t yet be counted in the rankings.”

This means Elon might see another increase between this year and next.

Students reacted to the news that Elon was named one of the most LGBTQ-friendly universities in the country with mixed emotions. While some, like former student Nicole LaFauci, were made “nauseous” by the idea, most were not surprised. The general consensus was that LGBTQIA students feel comfortable and safe on Elon’s campus. These students said they weren’t afraid of being discriminated against, and some had even received overt support from members of the campus community.

“I was never open in high school, but I came out of the closet when I was here. And I just kind of drop it sometimes on people, and they’re always like, ‘Cool. You do you,’” said Elon University junior Bella Mazzola. “I’ve had flings on campus where I’ve, you know, openly kissed girls or just walked around holding hands, and no one’s ever been rude about it.”

Many students said Bosch is to thank for the current level of acceptance and inclusivity that pervades the campus community. And they appreciate his efforts to extend this norm of acceptance outside the so-called “Elon Bubble,” as well. His push for an Alamance County pride parade, for example, helped many LGBTQIA students feel more comfortable within a town they perceived to be overwhelmingly conservative and potentially discriminatory.

Students who mentioned negative experiences cited microaggressions and thoughtlessness, like hearing the pejorative “faggot” dropped regularly in conversation or being made to feel like a fraternity’s “token gay” potential new member during recruitment.

Right now, Bosch is working to further the connection between Elon and the surrounding area. He’s building relationships with queer-straight alliances at local high schools and spearheading community events like Alamance Pride. And the rest of the LGBTQIA leadership team (Dana Carnes, Paul Geis and Jennifer Fry) is working alongside Bosch to implement the school’s 3-year Strategic Plan for LGBTQIA Inclusion.

But the heart of the problem seems to have less to do with administrative initiatives than with making the community members more openly identifiable to one another — at least according to students.

“An idea me and my friends were talking about was like, we wish everyone wore a bracelet. So you would just be notified like, ‘Hey, I’m bi,’ or ‘Hey, I’m lesbian,’” Mazzola said. “A different color bracelet to signify that you’re a part of the gay community and this is what you identify as.”

Mazzola said that in jest, but there’s truth behind her statement. Students have expressed hesitation about living in the Gender and Sexuality Living and Learning Community, because they’re afraid of being immediately outed. Others have resorted to using dating apps like Tinder, Her and Grindr — a potentially safer and more discreet option — but often become dissuaded when the app users are more interested in “hooking up” than “hanging out.” Spectrum, Elon’s queer-straight alliance, seems to be the best option for students, but some can’t seem to fit the meetings into their busy schedules.

“There’s no gay places to go here like there are in the cities. There’s no gay bar, so everything is straight,” said Elon University senior Chris Battaglia. “And if a gay guy was in a city and he had his choice, he would go to a gay bar. So I feel like maybe gay people don’t have their first choice of going out here.”

And, students say, this bar could go where the College Street Tap House currently is. Instead of renting out the former bar to students for events, the university could convert it to a safe social space for LGBTQIA students. This bar could serve as an alternative to the heteronormative fraternity parties that take up many Elon students’ weekends and could provide avenues for people in the community to meet and become friends.

“Just giving a more casual public space — sort of like Oak House is — would be really good,” said Elon University junior Justin Brown.But right now, the university LGBTQIA culture is still a work in progress. The leadership team will continue to implement Elon’s 3-year strategic plan, and students can keep advocating for changes like getting a gay bar on campus. Elon has made significant strides in the last few years, and Bosch said he hopes that each year, the culture will continue to improve.

“I would envision [Elon] to be so powerful, inclusive and connected that alumni who return in 10 years would say the same things they did at this year’s Homecoming, ‘As an LGBTQIA person at Elon, I have never felt as accepted as I do right now — this place has completely transformed,’ Bosch said.