Football attempts to move on to ‘new normalcy’ 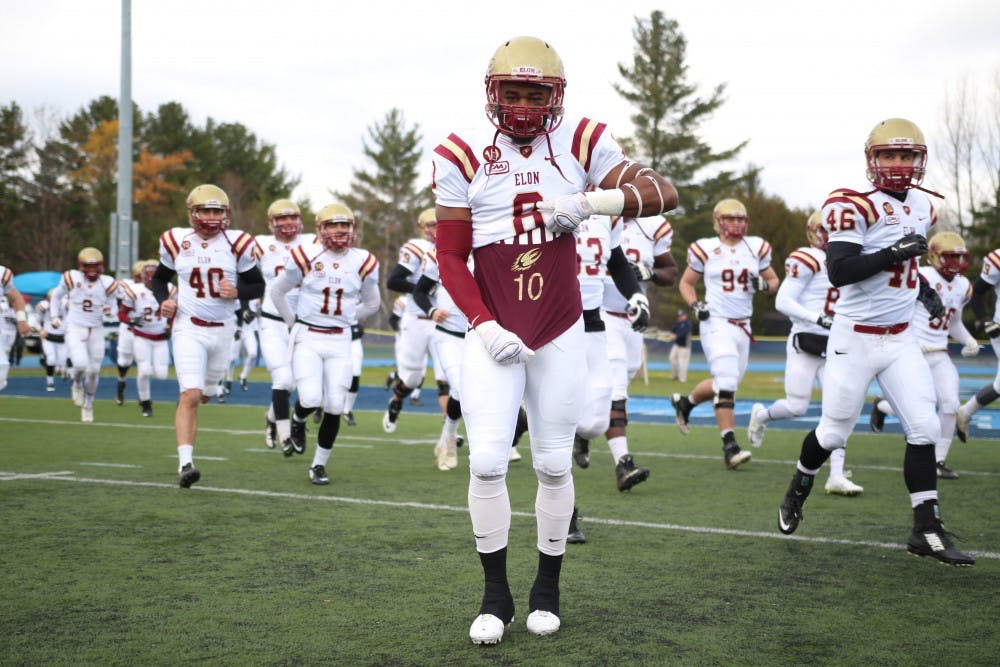 At the conclusion of a week of unimaginable tragedy, the Elon University football team returned to campus late Saturday night after defeating the University of Maine 27-22 earlier in the day.

But recalling the week and the death of junior wide receiver Demitri Allison leaves head coach Rich Skrosky with some lingering thoughts.

“One of the coaches — and so many coaches reached out — not to say anyone specific, but a name most people would know, his words were, ‘This week will be harder than last,’” Skrosky said, then paused, letting the words hang in the air.

The team’s chaplain, Bob Disher of St. Mark’s Church in Burlington, also reached out, sharing Psalm 23:4: “I walk through the valley of the shadow of death.”

The team will attempt to continue on in the face of adversity and heartbreak by creating a “new normalcy,” which Skrosky has reiterated to his coaching staff and players.

To play or not to play?

At the unofficial vigil held for Allison midnight Thursday, multiple football players said the team hadn’t decided if it would play Saturday, but said there would be a meeting at 9:40 a.m. the next morning. It was unknown if the decision would come at that meeting.

After the meeting, Skrosky met with the team’s leadership council of 12 players.

“I didn’t know right and wrong in this thing — there’s no book,” Skrosky said. “I just felt like it was better to do it with the smaller group. We talked, and those are hard conversations, but real conversations.”

The leadership council told Skrosky they wanted to play Saturday, but the coach said he hesitated.

“They knew there were going to be guys who had reservations about their decision, so I told them to get together,” he said.

It was in a players-only meeting ahead of the Gathering of Friends Thursday afternoon that the team decided they would play.

“We walk out to that and I said, ‘John [junior linebacker John Silas], we’re going to have to say something.’ He was like … It was a personal moment,” Skrosky said. “He literally grabbed me as we were walking into the Woods Center and was like, ‘Coach, we’re doing this, but let’s not say [we are] right now.’”

After the Gathering of Friends ended, the two captains, senior defensive back Miles Williams and junior linebacker John Silas, told the media they hadn’t come to a decision yet, while the equipment staff in the back of the locker room packed all of the team’s gear.

“Everybody has their own way to heal,” Silas said. “Me, personally, I need to do stuff and get involved. I decided to go up and play and take my mind off of it and get away from the state. Just get away as far as possible. Maine is … pretty far.”

Skrosky said he and the team were aware of how difficult the situation was and were sensitive to the players who felt they couldn’t play.

“I fully respect their decisions,” he said. “You can’t force a guy to play football.”

Only three wide receivers made the trip to the University of Maine — sophomore Tre Lennon and freshmen Corey Joyner and Tereak McCray — as the rest of the available wide receivers elected to stay behind.

Riebock made sure his players knew that the coaches honored whatever decision they made.

“My biggest thing was that everybody knew that, no matter what decision they make, it’s respected,” said wide receivers coach Billy Riebock. “You’re not thought of any less whether you’re on the trip or not. Everybody grieves in a different way, and each one of my wideouts had to make sure they handled that situation in their best interests. They had to be selfish.”

For Riebock, seeing his players hurting has left a lasting impression in the worst way.

“When you lose one of your own, and you see them that emotional … Words can’t describe it,” Riebock said. “Now that Demitri left us, it’s dealing with the hurt and emotions of those still with us. That is something I’ll never forget, and it’s an experience I hope nobody has to go through.”

For those who decided to go, turning around and preparing to play left the coaches in an undesirable position.

“Again, there’s no book to it,” Skrosky said. “When we decided to go ahead with it, and we figured out who was going to be available, then it was about trying to do our best to put these guys in a position to be successful at Maine.”

Skrosky said he was in the football facility until late Thursday night — “I don’t know if I was in the best state of mind” — and started to put some notes together. The plane flight to Maine Friday afternoon is when the game plan came together completely.

Riebock said the lead-up to the game was the most difficult part.

“The easiest part probably was once the whistle was blown and they could put their mind, for those 60 minutes, somewhere else,” Riebock said. “The warmups, the meetings, it was different. I’m not going to sit here and tell you that it wasn’t.”

Pulling out a close win

Maine held a moment of silence before the game, and the majority of the Elon sideline dropped a knee to remember Allison. Once the game was underway, the defense shone in the first half for Elon, forcing three turnovers.

Williams forced a fumble on the first defensive play of the game for Elon, which Mitchell recovered. On the next play, redshirt freshman quarterback Connor Christiansen rolled right on a play-action and found Joyner open for a 16-yard touchdown.

Elon added 10 points in the second quarter, off of a 42-yard field goal from junior kicker John Gallagher and another touchdown from Christiansen to Joyner, this time from eight yards out. The lead was 17-0 at the half.

Maine responded with 16 straight points, but after a touchdown cut the deficit to one, Black Bear sophomore kicker Sam Lenson missed the extra point. Elon maintained a one-point lead.

On the next drive, freshman running back Malcolm Summers stepped up for the Phoenix, breaking out a 21-yard rush to get Elon to Maine’s red zone. Two plays later, Summers went right and wasn’t touched, scoring a 13-yard touchdown.

Elon’s defense forced a turnover on downs in the next sequence, and after three plays, Gallagher hit a 33-yard field goal to make it a two-score game again.

Maine added a 7-yard touchdown pass as the clock expired, but without a chance to tie the game on the conversion, officials ended the game. Elon had won.

Both Skrosky and Riebock acknowledged that they didn’t really think of Allison much during the game as they focused on what was on the field.

But for Lennon and Silas, Allison was constantly on their minds.

“I thought of him the whole time,” Silas said. “I kept patting his number that they stitched on our jerseys. It meant a lot to be playing there for him.”

“I felt like he was on the field with me,” Lennon said. “I only practiced one time last week, and it felt like Demitri just took me through every play. It made it more easy on me and I just wanted to make him proud.”

Riebock said he thought of Allison when the game ended.

“Once that whistle has blown, now you’re back to reality — and reality, recently, has not been what we want,” Riebock said. “We’re trying to create a sense of normalcy — it’s the new normal, so to speak — and we have to make the best of that in order to keep going on, and keep progressing off and on the field. I think that’s what Demitri would want.”

Riebock attempted to find a silver lining in the tragedy, believing the win will help make his position unit and the team closer. For Skrosky, all the factors that played into the week made the victory over the Black Bears special.

“For them to go on the road in those circumstances — not only distracted but then personnel-handicapped — to go out and win a football game is pretty cool,” he said.