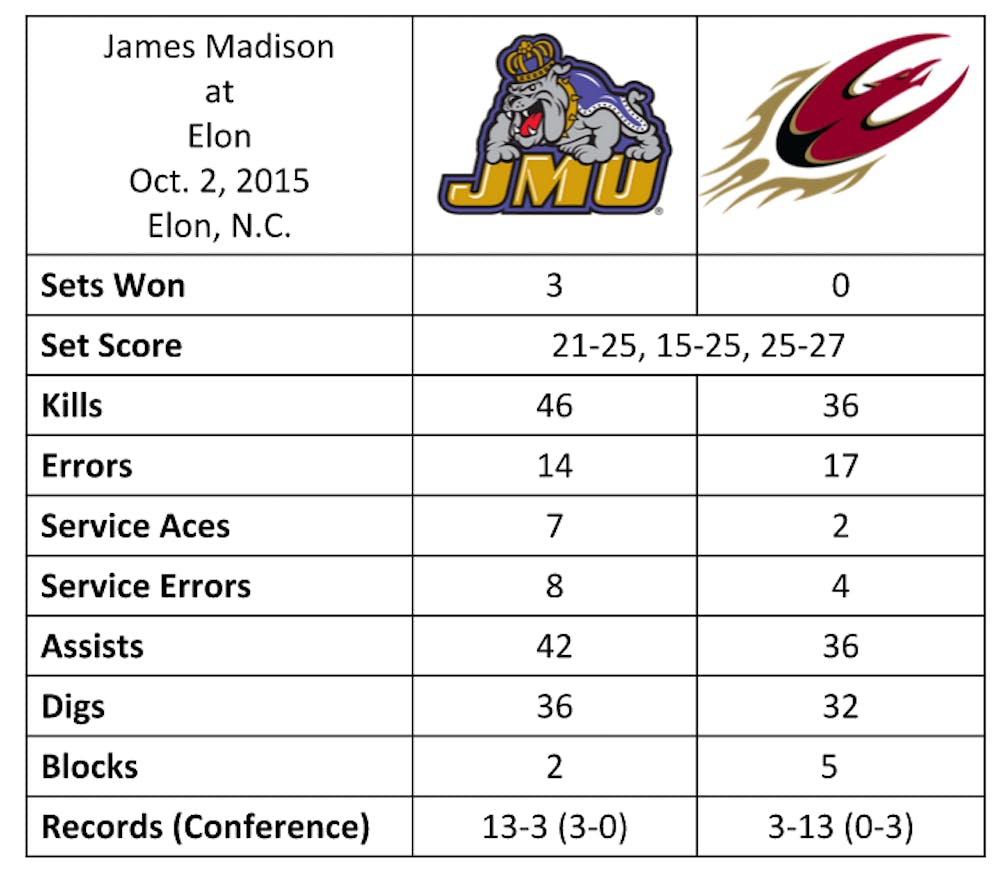 "We were confident coming into this match tonight," said head coach Mary Tendler. "It was frustrating that we started out with some silly mental errors, so we didn't set the tone early."

The Phoenix was competitive in the first set. Down 17-14, Elon pulled within one after a kill from sophomore outside hitter Sydney Busa and an attack error by James Madison. The Phoenix was unable to capitalize on the momentum, though, as the Dukes went on a 8-5 run to seal a 25-21 first-set victory.

The Phoenix was stifled offensively in the second set, scoring just 15 points. Elon committed nine of its 17 errors in the set, and James Madison capitalized with 13 kills and just one error. With the set tied 12-12, James Madison went on a 13-3 run to win the set, 25-15.

The third set proved to be the most contested, with both teams battling for the lead late. With the score tied 25-25, James Madison broke free and cemented the victory with consecutive kills, 27-25. The Phoenix had 13 kills in the set, its most in any set during the match.

"You can't be happy with a loss, but looking to the future, we have so much to look forward to," said freshman defensive specialist Maddie Jaudon, who finished with nine digs and an assist. "That's all you can ask for. It's early in the season, [and] there's so much room for improvement."

"Megan had a great match," Tendler said. "JMU struggled stopping her. It seemed like everything she hit hit the ground on the other side, whether she was front row or back row. She had one of her best matches of the year."

The loss drops Elon to 3-13 on the season and 0-3 in the CAA. James Madison moves to 13-3 overall and remains unbeaten in conference play at 3-0. Elon returns to Alumni Gym 2 p.m. Oct. 4 for another CAA match, against Towson University.