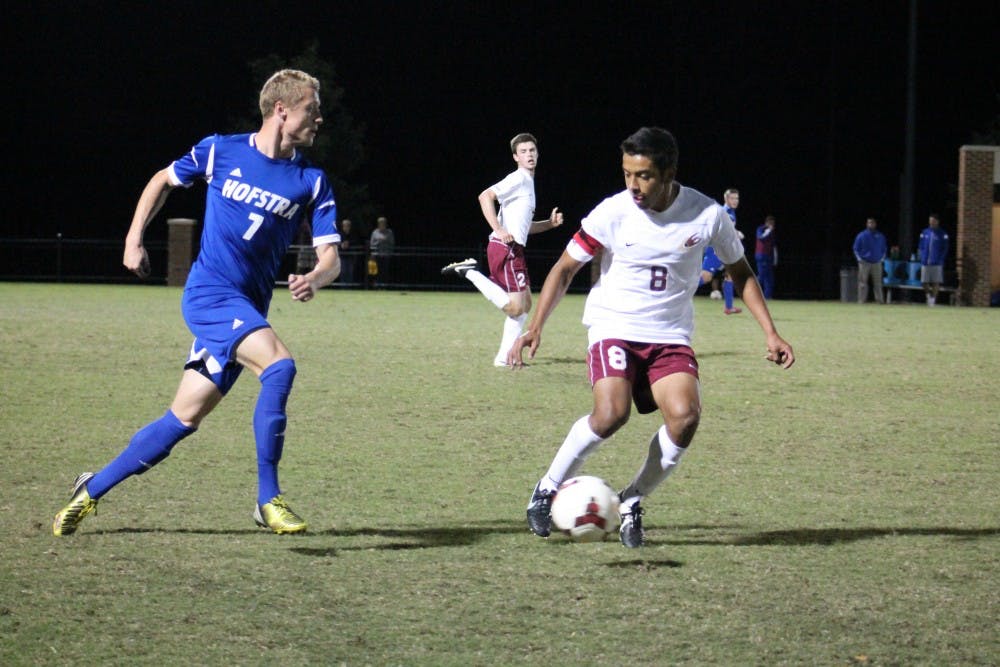 The Elon University men’s soccer team has started 4-0 for the first time since 2006. The Phoenix wrapped up its weekend in Wilmington, at the Courtyard by Marriott Wrightsville Beach Classic with a pair of victories over Campbell University and the University of North Florida.

Last week, the Phoenix picked up its first two wins of the year over DePaul University and St. Mary’s College of California at the John Rennie/Nike Classic in Durham.

“For us to come through this with four wins, I think it’s remarkable,” said head coach Chris Little.

The Phoenix played four matches in nine days. In each tournament the Phoenix kicked off at 5 p.m. on a Friday and then turned around and played at noon the following Sunday. That meant the Phoenix was playing either midday or early evening in heat and humidity.

“We really tested ourselves,” Little said. “Some of these players are running eight, nine miles a game with high intensity running and then to turn around and be asked to do that again in 90-plus degree weather is very difficult.”

Little said while the start times and short turnarounds didn’t make things any easier for his team, it’s done by design.

“The reason to do it is to replicate the conference championship at the end of the year,” he said. “You have to play on Friday and then Sunday if you want to win the conference title, and that’s the goal of our program every year.”

Last season the Phoenix failed to qualify for the final rounds of the Colonial Athletic Association (CAA) conference championship, losing to Northeastern University in the quarterfinal round.

Elon won its first three matches of the season with shutouts, and kept North Florida scoreless until a goal from junior defender Simen Solstad in the 32nd minute in Elon’s 5-2 victory Sept. 6. That goal broke the Phoenix’s streak of more than 300 minutes without surrendering a goal to start the year. In the 39th minute, the Phoenix allowed another goal.

Little chalked the first goal up to bad luck. He said Jegier had the free kick covered, but the shot took a deflection and ricocheted in the opposite direction and into the net.

“The disappointing part was that we conceded a second [goal] quickly after the first one,” Little said. “What was good for Jegier’s development was he responded well for the rest of the match and kept a clean sheet [in the second half.]”

The Phoenix led North Florida 3-0 early in the match before conceding two goals in the span of seven minutes. Elon recovered and regained their two-goal advantage with a pair of late goals from senior forward James Brace, his second career multi-goal match.

Those were goals 11 and 12 for the Phoenix after just four games, compared to 22 scored all of last season. Six Elon players have already scored this season, including four multi-goal scorers. The experienced front three of seniors Caue Da Silva, Cooper Vandermaas-Peeler and Brace have been lethal. Senior Eduardo Alvarez has added a pair of goals from midfield, and freshman forward Jaiden Fortune has already recorded the first goal of his collegiate career along with three assists.

The Phoenix will return to the familiar confines of Rudd Field on Sept. 12 after back-to-back weekends away from campus. It’s the first of just seven home matches the Phoenix will play. Little said he’s eager to get back home and play at 7 p.m., a time they are more accustomed to.

“We can’t wait to play at home – We always have really great support,” he said.