How I stopped hating politics 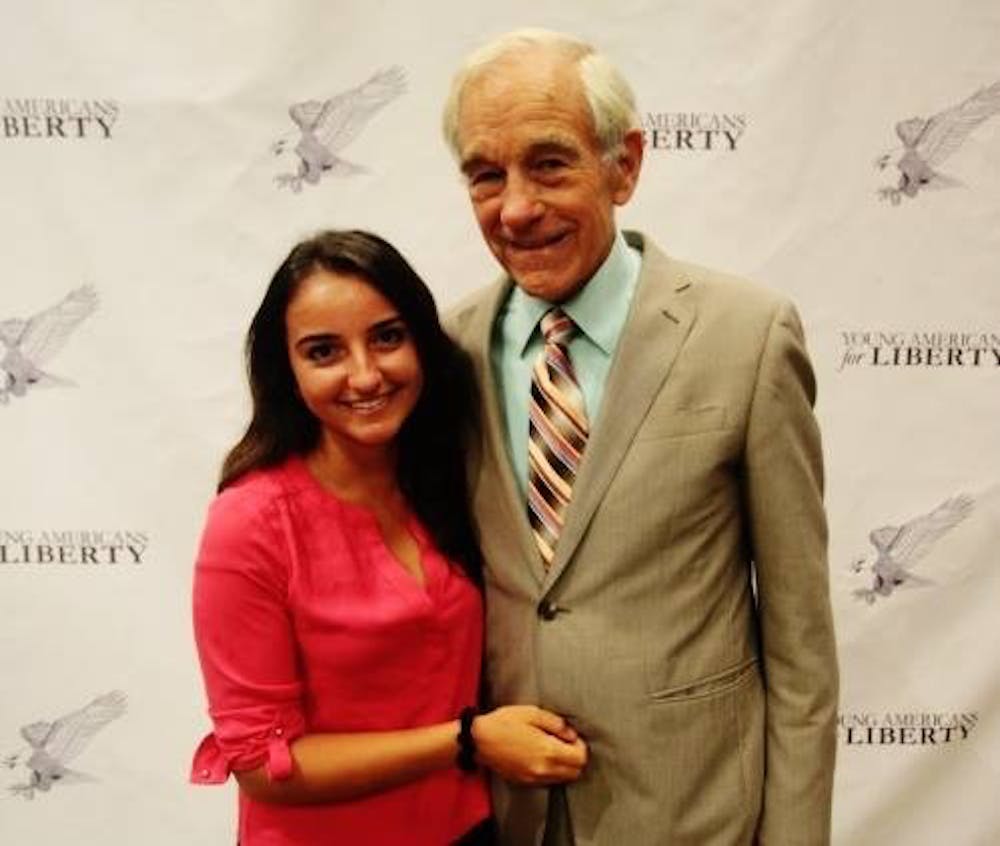 Natalie Brown with Ron Paul at a YAL convention in Washington, D.C.

I think it’s safe to say that there are few things college students love more than their freedom. I am no exception, which is why I joined Young Americans for Liberty (YAL).

Before joining YAL, I had no interest in politics. It seemed to me that no matter who takes the White House, Republican or Democrat, nothing changes — our national debt still goes up, we still have troops on the ground in foreign countries around the world and what we search on the internet continues to be monitored.

I always felt conflicted in this two-party system because my beliefs don’t fit entirely in the left wing or the right wing. While one side argues for a high degree of government involvement and regulation in economic activities, the other supports the government telling people who they can and cannot marry. In both cases, the government is failing to fulfill its role of fully protecting the individual rights of citizens — the rights to life, liberty and property.

This simple “pro-liberty” philosophy I acquired is one that I find is not as uncommon as I thought. Many 20-somethings I talk to claim to “hate politics,” don’t view big government very favorably and, as a result, merely settle for whichever party supports the majority of their beliefs. Though I had done the same thing, YAL opened my eyes to the crazy idea that perhaps I don’t have to settle.

As a non-partisan organization, YAL welcomes anyone, liberals and conservatives alike, who has an interest in defending liberty. Knowing that many students I talk to feel deprived of certain freedoms or feel that their rights are being infringed upon, I encourage you to explore everything YAL does as the largest pro-liberty organization on America’s college campuses.

The most valuable aspect of college for me is that people from all different backgrounds with diverse experiences can come together and share their individual ideas and perspectives, challenging one another to think differently and openly. Often, we hesitate to see things from an opposing viewpoint, perhaps out of fear that doing so would change our minds.

But isn’t the whole point of college to broaden our horizons, exchange ideas and hear what others have to say in order to educate ourselves? In his article “Demanding More from College,” New York Times op-ed columnist Frank Bruni explains the importance of college in getting students to break away from the habit of surrounding themselves with the familiar, and instead exploring ideas that might lead them to challenge their own:

“As we pepper students with contradictory information and competing philosophies about college’s role as an on ramp to professional glory, we should talk as much about the way college can establish patterns of reading, thinking and interacting that buck the current tendency among Americans to tuck themselves into enclaves of confederates with the same politics, the same cultural tastes, the same incomes.”

Before coming to Elon University, I never saw myself doing anything related to politics, besides the occasional angst-fueled Facebook post of a meme about legalizing marijuana or balancing the budget. At the same time, I never knew a group, like YAL, that truly stands for personal freedom existed.

After signing up at the Org Fair two years ago, I can now say I have been to two YAL National Conventions in Washington, D.C., I have met hundreds of pro-liberty individuals as well as former presidential candidate Ron Paul and I have taken over as President of YAL’s chapter at Elon.

I have YAL to thank for taking me from hating politics to trying to change politics, which I think should be an important goal for anyone who values their freedom. Even if you try it out and realize this organization is not for you, what matters is that you took the plunge from the familiar to the new, making the most of these invaluable four years that are, without a doubt, life changing.

Natalie Brown is president of Elon University's chapter of Young Americans for Liberty.