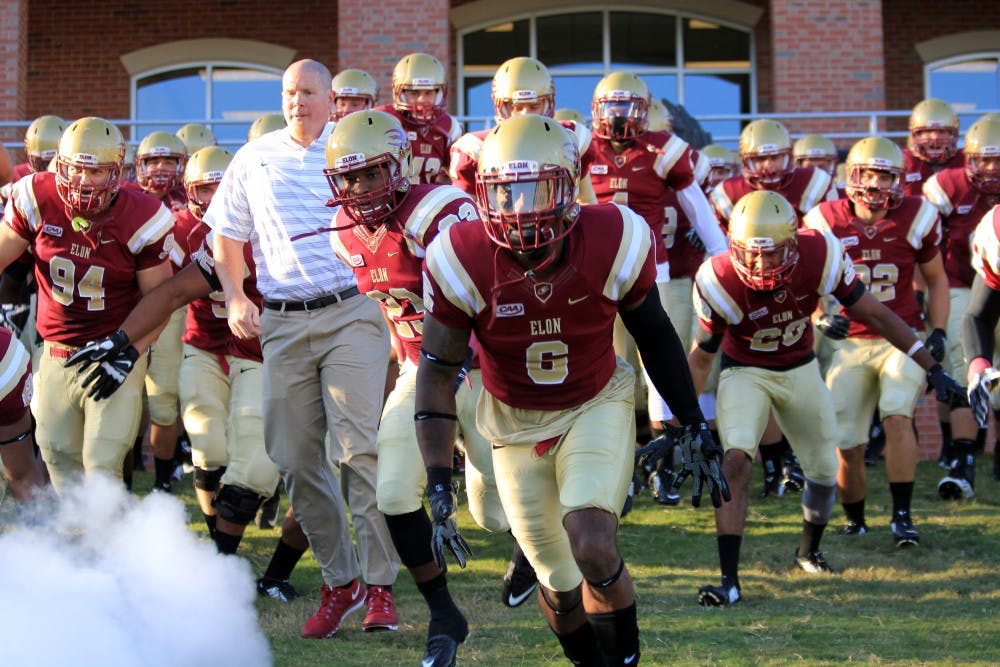 The Elon University football team stumbled on offense throughout its nonconference slate this season.

And with Colonial Athletic Association (CAA) play kicking off this Saturday against Towson University, the games are only going to get harder.

The CAA is home to six of the top 50 defenses in the Football Championship Subdivision (FCS) — including top-ranked Stony Brook University — and five of those six schools are on Elon’s schedule this season.

“There’s definitely good defense being played [in the CAA],” said head coach Rich Skrosky. “I think a lot of [the good defense comes from] the structure of the conference, and especially the coaching in the conference. I think the defensive coaches do an outstanding job of preparing for so many different styles of offense.”

In the three games against Wake Forest University, Gardner-Webb University and North Carolina A&T State University, Elon’s offense mustered 31 points total, with only 17 of those points scored in regulation time.

All three opponents are ranked as some of the best defenses in the country — Wake Forest is ranked ninth in total defense in the Football Bowl Subdivision (FBS), and Gardner-Webb is ranked 18th and N.C. A&T sixth in the FCS.

Both Gardner-Webb and N.C. A&T’s schedules included a game against a Division II team, which no other Elon opponent has on its schedule this season.

But the quality of the opponent doesn’t tell the whole story. Statistically, Elon’s offense is one of the worst offenses in all of FCS through the first three weeks of the season.

The yardage numbers are not much better — the team is 109th in passing offense, with 119.67 yards per game, and 112th in rushing offense at 77.3 yards per game. Combine the two, and the 197 yards of total offense per game ranks 118th in the country.

There are only five FCS teams in the country who have performed worse than Elon on offense so far.

After a rough run in nonconference action, it could get even uglier for Elon in the CAA.

If you like offense, then don’t miss a single James Madison game this season. The top offense in the FCS is averaging 51 points per game and an impressive 652 yards per game. The Dukes are led by fifth-year senior quarterback Vad Lee in the air and running backs redshirt sophomore Cardon Johnson and junior Khalid Abdullah on the ground. They’ve only played FCS teams so far, but this week’s game against FBS Southern Methodist University — which also sports a high-octane offense — should be considered must-see.

The Seawolves have played well during their first three games of the season, even in unusual circumstances — the season opener against the University of Toledo was canceled at halftime. Head coach Chuck Priore has made Stony Brook into a defensive force, with the most points allowed last season coming in a 28-20 defeat at New Hampshire. The Seawolves got their revenge last week, with a 31-6 upset of the Wildcats, and the hot start may cause analysts to reconsider their expectations for the Seawolves this season.

The CAA’s preseason favorites to win the conference have had a challenging start to the season, with a five-point loss to University of Connecticut and seven-point wins over Fordham University and Delaware. The Wildcats are not on Elon’s schedule this season, but fans can see them on any of the five nationally televised conference games. Villanova avoids New Hampshire and Stony Brook on its schedule, but with All-American senior quarterback John Robertson hurt in last week’s game against Delaware, Villanova might not be able to run the CAA table.

Albany went undefeated in nonconference play last season, receiving votes in the polls for the major of the year. As the only team with two conference games already this year, the Great Danes are looking to add a few more wins in nonconference play. Second-year head coach Greg Gattuso has two CAA Freshman Players of the Week already in running backs Elijah Ibitokun-Hanks and Elliot Croskey. They will be players to watch as the season goes on for Albany.

As the first opponent on Elon’s CAA schedule, the Tigers will give the Phoenix a physical challenge. After hanging tough but ultimately losing to FBS East Carolina University, Towson won two hard-fought games at home. Head coach Rob Ambrose has a balanced team so far — 37th in total offense, 38th in total defense — but the Tigers only went 2-6 in CAA play last year.

The Spiders finally put together a solid season under head coach Danny Rocco last year, getting back to the postseason for the first time in five years. Now, the fourth year coach has big expectations for his team, but they’ve struggled so far. A blowout to University of Maryland and a comeback three-point victory at Hampton University were both games that Richmond expected to do better in. But the Spiders have a bye week to get ready for conference play, which starts with hosting Maine and Elon.

William & Mary caused a major stir in its state this past weekend when it nearly defeated the University of Virginia in Charlottesville. But a fumble pushed the Tribe back to a fourth-and-long situation, and the Cavaliers stopped the team to win 35-29. The loss stings, but it should be a sign of the good things to come for legendary head coach Jimmye Laycock’s team this season. William & Mary will face the toughest schedule of any CAA team, though, as it misses Rhode Island, UAlbany and Maine.

Maine is the only CAA school to face two FBS teams this year, receiving a combined $725,000 to play (and ultimately lose to) Boston College and Tulane University. But despite the lopsided scores, the Black Bears are a threat to contend this season. They have a tough schedule this season even with avoiding James Madison, William & Mary and Delaware, as they travel to both Villanova and New Hampshire. Elon will travel up to Orono, Maine come Nov. 14 — brrrrrrr.

The Blue Hens’ season started poorly, with a loss to non-scholarship Jacksonville University at home on the opening weekend. But Delaware recovered with a strong showing against Villanova, even in a 28-21 loss. They play their lone FBS opponent this week — the University of North Carolina at Chapel Hill — but have a relatively easy schedule the rest of the way. Home games against both New Hampshire and James Madison will give the Blue Hens and their 25th-ranked defense a chance for a big upset.

It’s been a rough start to the 2015 season for the Wildcats, who were the top-ranked team in the FCS after the 2014 regular season. They were blown out by FBS San Jose State University, and Stony Brook dominated them last weekend. But if any team is capable of recovering, it’s New Hampshire, who should still be considered contenders for an FCS playoff berth. After two consecutive semifinal appearances, though, 17-year head coach Sean McDonnell is in trouble this season.

Rams head coach Jim Fleming is one of four coaches around the CAA in their second season at the helm, and the struggles in Kingston, Rhode Island are similar to Elon’s. After a 1-11 season last year, Fleming is hoping junior quarterback Paul Mroz can continue to improve as the season goes on. The Rams’ best chance for a win comes against in-state rival Brown University Oct. 3.