Teaching piano, 15 seconds at a time 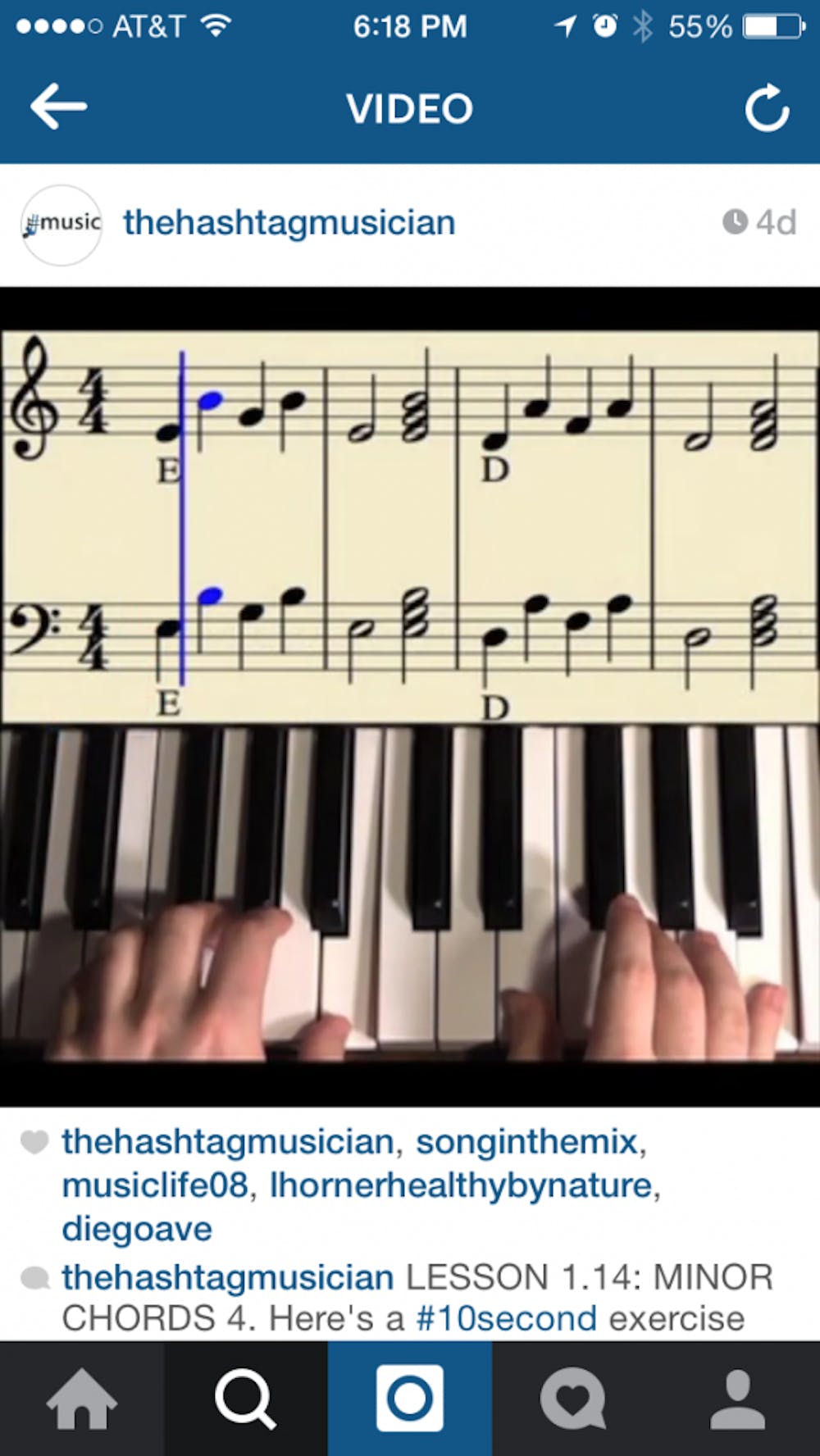 Through Instagram, Horner provides followers with easy tutorials of chord progressions that can be learned in less than 10 minutes. Photo by Haley Longbottom, Design Editor

These are not your parents’ piano lessons.

Junior Addison Horner is trying to entice would-be pianists onto the keyboard through an unconventional medium — Instagram. What started as an Elon University Honors Fellows thesis project has evolved into a more ambitious plan to teach anyone how to play piano through a series of short, 15-second video lessons spread out over a 10-month curriculum.

But with his program, “#Music,” (Instagram: thehashtagmusician) Horner isn’t trying to re-invent the musical wheel — or take his teacher’s job.

To do this, Horner has mapped out a specific lesson plan that starts with the very basics — half and whole steps — and builds over time to the more complex — rhythms and melodies. Within five weeks, he claims, the avid student will be able to play a “wide range” of pieces.

“That’s the beauty of it — it’s geared to be a quick,  simple thing, and most of the time, it seems people are daunted with music lessons because of the time commitment,” said Clay Stevenson, a lecturer in music who helped Horner with his project proposal.

The early lessons, especially, are designed to familiarize people with the piano, whether they’re learning for the first time ever or it’s been years since they last touched the keys. With no instructor present to answer questions, keeping things simple is key.

“The best answer is usually put it in layman’s terms,” he said. “Make it really simple. Don’t put it in flowery language. And that’s exactly what I’m trying to do.”

Less-than-fond memories of classical lessons tend to alienate younger people from the keys before they even get started, Horner said. He’s fighting the antiquated assumption that piano keys are for Beethoven or Bach, but not Sam Smith or Maroon 5, by playing “nothing-old fashioned, just what people are listening to and want to hear.”

The Instagram curriculum has the leg-up on modernity, according to Stevenson, who said that a traditional introduction to piano is based around classical music, not necessarily popular music that can “open a whole new world” and shake the cobwebs off the piano.

“He’s going about it in a little bit of a different way, saying, ‘You can play this music that you love,’' Stevenson said.

Horner — who started playing piano at age 4 — is working toward his virtual students being able to learn by ear, not by sight from sheet music, a skill he picked up in high school. Before they get there, though, followers of “#Music” should be able to play a range of music before the curriculum is halfway complete.

“By that point, you’ll be able to — without much effort — play most basic stuff,” he said. “Most people take years to get to that point, but I’m really trying to accelerate the process and make it work with a college student’s schedule.”

For those who have never touched the keys, though, starting from Instagram may be too much to ask for, Stevenson said, adding that an instructor is crucial for the little things from the get-go — posture, positioning and other fundamental skills.

“It’s fair to say that this process could get a learner to a certain level, and then they would probably have other routes that would be needed to get further,” Stevenson said.

People’s busy schedules — which the music director of Smooth Progressions, an Elon a cappella group, and member of Campus Outreach, a religious charity organization, knows all too well — is one of his biggest concerns for the success of his virtual students.

By eliminating the instructor and in-person lesson, Horner also placed the accountability for learning squarely on his students’ shoulders. It’s the nature of virtual lessons.

“To make people keep actually learning?” Horner said. “That’s going to be the toughest part. You can’t teach someone a will to learn. You can’t control that.”

Through a “lot of trial and error,” the budding teacher is controlling as much as he can while learning some important lessons of his own.

He used to hate the idea.

That changed the summer after his freshman year of college, when Horner was forced to teach a group of elementary school-aged campers during an internship at Temple Theatre in his hometown of Sanford, North Carolina.

“If you can teach kids, you can teach anyone,” he said. “Kids are definitely the hardest people to teach. It forces you to break things down in a very clear and purposeful way so that people can understand what you’re talking about.”

By handing out small prizes for campers who did well and making sure to congratulate effort in front of their peers, Horner learned a little something about motivation. Having always been self-motivated when it comes to piano, he at first said he didn’t understand the value in incentivizing every step of the way.

But he’s found that most people need just that: a reminder that they’re making progress each day.

“Because there’s a lesson each day, you have the achievement every single day,” he said. “People who learn every day for three months in traditional lessons and don’t learn anything will be burnt out.”

The format of “#Music” keeps things moving quickly, and while it can be easy for students to lose interest or fall behind, for Horner the Instagram pros outweigh the cons.

“Instagram is designed around pictures and videos, so it’s the best way to convey information, like actually showing people how to play piano, without taking a really long time,” he said. “You don’t have to spend an hour to learn one lesson. You don’t even have to spend 10 minutes.”