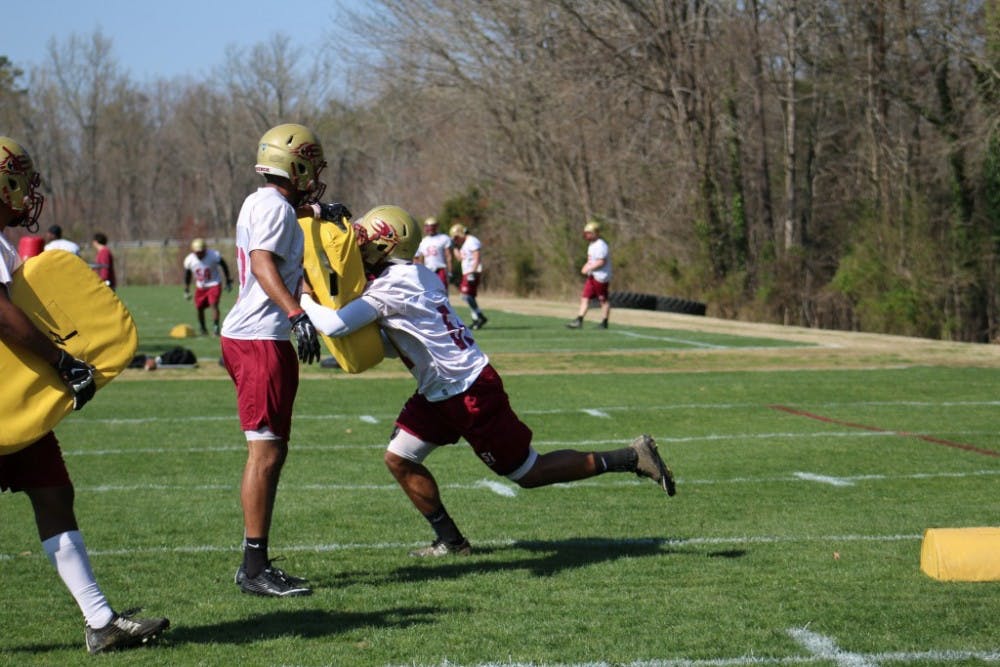 The crunch of the fall leaves and the brisk wind blowing as the sun sets are sentiments usually associated with football season.

Not the chirping of birds and spring flowers.

Spring football practice has continued to grow across the college and high school game, with spring games at larger schools drawing upwards of 40,000 people. Many teams have begun their annual spring practices that culminate in a spring game — an intrasquad scrimmage.

But with the increasing number of concussions and brain-related injuries in football, spring football needs to be limited.

At Elon University, the football team opened spring practice Monday. The spring game will be played in a primetime slot of 7 p.m. April 25 — the third straight year it’s been held at night.

The purpose of spring football is to keep the players in shape, practice new plays or formations and get an idea of what the depth chart could be in the fall. All of those things can be done without what the NCAA calls “live contact,” which involves tackling to the ground and/or live-speed blocking. Instead, full-pad practices should be the most intense type of practice in the spring. Full-pad practices simply have the players in full pads and don’t require live contact — rather, they’re focused on honing technique and conditioning to prepare for games.

Elon, like all other college teams, mixes in live contact during the spring. The live contact practices should be cut down to include just one scrimmage and no more than two other days. As more and more football players are sidelined because of brain injuries, it’s best to stay away from contact as much as possible, especially considering players go through nearly a month of camp before the season starts in August and many spend the entire summer at school working out with the team.

Last month, Chris Borland, a 24-year-old linebacker who led the San Francisco 49ers in tackles last season, retired less than one year after being drafted out of the University of Wisconsin. He cited the potential for brain trauma in the future as a prime reason for the early retirement.

For years, it’s become more and more prevalent how football players are impacted by the hits they suffer from playing the game. Borland’s situation shows that players are taking heed of what’s happening to their predecessors.

Defensive back Akeem Langham, who was a fifth-year senior for Elon last year, missed the last three games of Elon’s 2013 season after suffering two concussions in a three-week span. As a result, Langham wore a thick, padded cover to his helmet during spring practice in 2014.

It’s time the NCAA and its institutions begin taking more measures to protect the athletes.

The Elon football team should make an effort to stay away from live contact for the majority of its spring practices and focus more on summer training sessions.

Last year, head coach Rich Skrosky was pleased at the team’s progress throughout the summer because nearly the entire team was at Elon working out through June and July.

Spring practice has some benefits, yes. It boosted an Elon team going through a coaching transition.

But the long-term consequences outweigh the immediate positives that can be gained from live contact in spring practices. Elon should be wary of that this month, and should use live contact as little as possible.