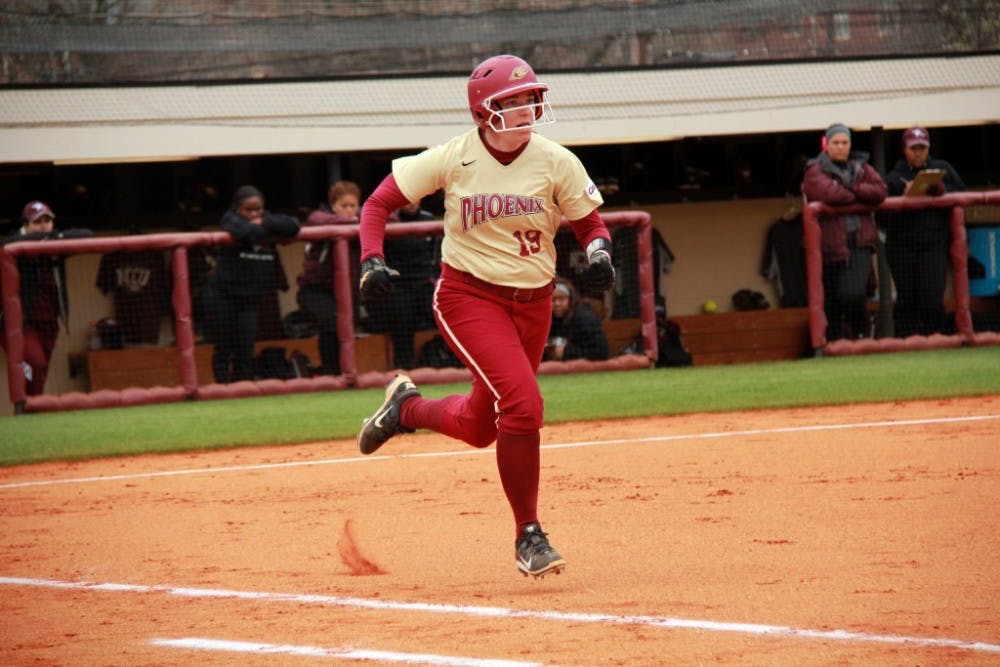 While 18 runners left on base may not be a typical recipe for success, the Elon University softball team cashed in on enough opportunities late in its second game to split its doubleheader against the University of Delaware Blue Hens.

After losing the first game 4-1 and stranding 11, the Phoenix scored five runs in the bottom of the fifth inning in the second game. Sophomore Emily Roper put Elon on the board and gave her team a 4-2 lead after crushing a home run to center field.

“I was just trying to get extended on a ball and get something to the outfield” Roper said. “Kara [Shutt] had already hit an RBI and I knew I just needed to get something deep enough.”

But the Phoenix didn’t settle down after Roper’s homer.

Freshman Kiandra Mitchcum roped a double to left center to put the Phoenix ahead 5-2 through five innings of play. After an RBI single from sophomore Carey Million, Mitchum got another hit to extend the lead to 7-2.

With Elon senior Chelsea White in the circle to pitch the final two innings, the Phoenix ended up winning 7-4 after a pair of Delaware runs in the top of the seventh inning.

Elon delivered clutch hits late in the second game but could not gain momentum in its first game.

Roper struck out in her first at-bat of the day with two outs and runners on first and second in the bottom of the first. Freshman Madison Kadlic grounded out to short with two outs and a runner on first in the second. Struggles turned from bad to worse though in the fifth, sixth and seventh frames.

“[Delaware sophomore starting pitcher Carolyn Szymanski] mixed in her screw pitch, she mixed in a changeup, she everything in and she kept our hitters off balance a little bit,” Elon head coach Kathy Bocock said. “We went hard at them and we tried to do the things we did. And they scored runs and we didn’t; it’s that simple.”

Szymanski battled through seven innings of work to throw the complete game. But the process to notching the win proved quite difficult.

Hall recorded two of her team’s five hits by going 2-for-3 with a pair of singles and walk.

“I decided I should slow everything down and try to see the ball, hit the ball,” Hall said.

In the second game, Hall continued to assert her dominance by going 2-for-3 once again with another pair of singles. But she changed her approach at the plate by slapping the ball to gaps in the infield and outfield.

While cashing in on offensive scoring chances was a challenge in the first game, so was containing the Blue Hens offense.

Delaware senior right fielder Jessica Grisler got off to hot start by going 2-for-2 with a solo home run against Caruso while sophomore Sarah Bencivenga started the day 2-for-2 with a couple singles.

The Delaware-Elon series will continue tomorrow at 1 p.m. as the Phoenix look to win the rubber game and remain near the top of the Colonial Athletic Association standings.

Of the eight softball teams in the CAA, only four advance to the postseason conference tournament. Elon started and finished the doubleheader in third place over Delaware by half a game. Since Elon will take on James Madison and Hofstra, the top two CAA teams, within the next two weeks, there is little margin for error against Delaware.

According to Bocock, her players are aware of the standings but don’t concentrate too much of their energy on it.