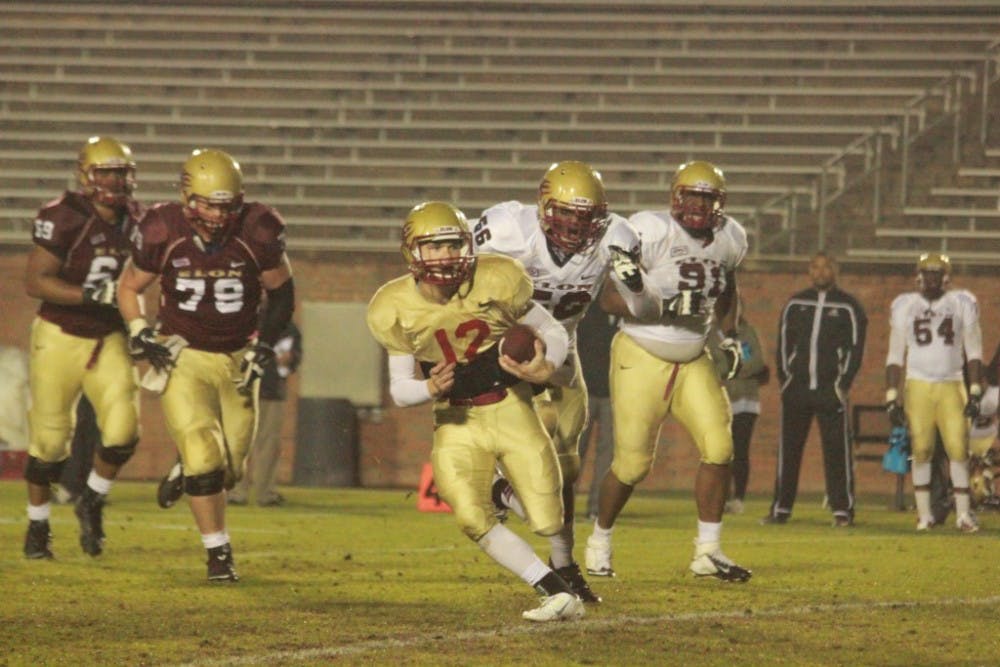 Spring practice is over and as we progress into the summer and fall, the same question surrounds the Elon University football team.

Who’s going to start at quarterback?

It’s head coach Rich Skrosky’s second season, and it’s the second straight year this is at the forefront of discussion. He’s made it clear he won’t decide between redshirt freshman Connor Christiansen and true freshman Daniel Thompson until the fall.

“I don’t even have a date,” Skrosky said. “Will it be after the second scrimmage? We’re not even going to say 1 and 1A.”

Christiansen, the 6-foot, 188-pound native of Fishers, Indiana, redshirted last year under Mike Quinn and John Loughery, both of whom are now gone. He’s got the experience edge over Thompson, who’s 6-foot, 198-pounds and graduated high school early to enroll at Elon in February.

That’s perhaps why Skrosky put Christiansen with the first-team offense during the spring game. They both saw reps with the first team during spring practices.

Since Christiansen has been in the system for a year now, it’d be easy to think he has the upper hand.

“After the [James Madison University] game last year, I was like all right, it’s my time,” Christiansen said. “I’m always going to go in like I’m number one. I’d be cheating myself if I didn’t. ... I sat on the sidelines for the first time in my life — and I hated it. I don’t want to do that anymore.”

Christiansen made the play of the night, faking a spike and running in for a 2-yard touchdown as time expired. It was the game’s only touchdown.

Thompson, though, had some of the more impressive throws. Both went long to begin a handful of drives, but the longest pass play was Thompson’s 33-yard completion to freshman Josh Ramseur early in the second half. On his first drive, Thompson stepped up for a 17-yard completion to Demitri Allison on 3rd and 15. Three plays later, on 3rd and 8, he hit B.J. Bennett for an 11-yard completion and a first down.

“I thought I made some stupid mistakes, some dumb reads and stuff like that,” Thompson said. “I think everything I did was correctable. The good thing I did was trusted my receivers more.”

That’s good, because Thompson has plenty of time to correct all of that.

The whole idea of a quarterback competition is more annoying than anything. Since he was with the first team during the spring game, can’t you just say Christiansen is currently the starter?

“We’re not even going to come close to saying that,” Skrosky said. “We’re going to let it play out. I think it’d be unfair for both of them if we said, ‘OK, you’ve had 15 practices. Let’s make a decision.’ We’re going to let them compete throughout the summer and go into fall camp.”

Excellent. Thanks for the suspense, Rich. See you in August.