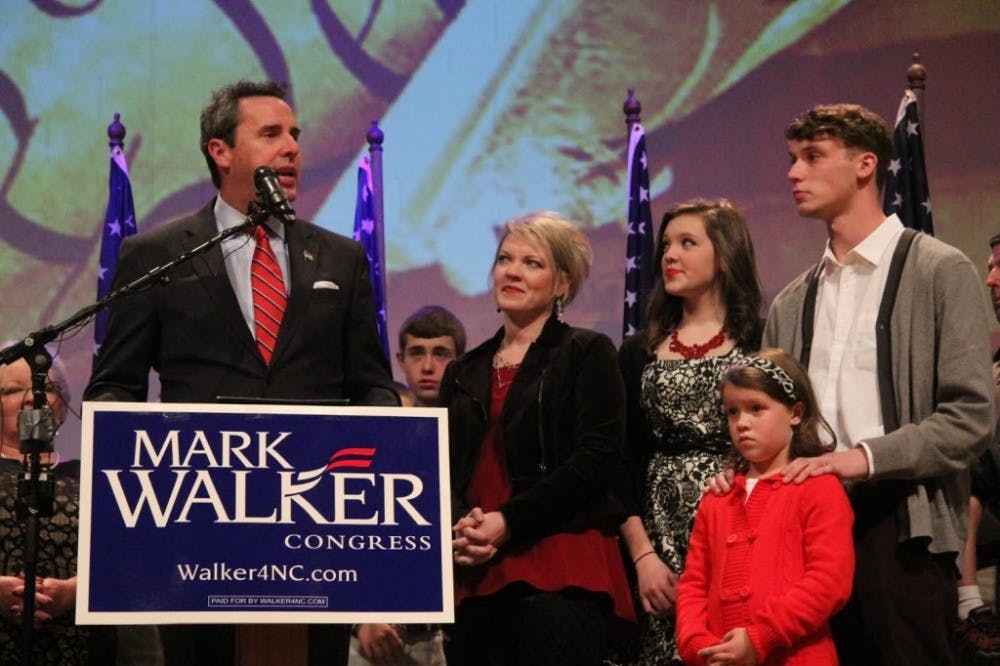 Republican Mark Walker celebrates winning the race against Laura Fjeld for representative of U.S. District 06 as his family watches on. Photo by Hali Tauxe-Stewart, senior reporter

It was a good night for North Carolina Republicans. North Carolina Speaker of the House Thom Tillis came out on top in one of the nation’s closest Senate races two and a half hours after Republican Mark Walker earned a seat in the U.S. House of Representatives.

The North Carolina Senate race has been considered one of the most important in the country, with party control for U.S. Senate hanging in the balance. Either candidate’s victory would have tipped the balance of party control in Washington, D.C.

“The Democrats have proven that they are incompetent for regulating business,” said Jeffrey Berlin, a Charlotte resident. “Tillis has shown that with his reform of the tax code that he has helped business climate.”

Hundreds of North Carolinians came out to support Hagan, who also rallied in Greensboro, each with their own reason for casting their votes for her.

“I work so hard because I have 19 kids that deserve me working so hard, but we don’t get the support or the supplies we need from the government,” she said. “I think that her focus is on education.”

The race for the North Carolina Senate seat was among the closest and most expensive in the U.S, with more than $100 million spent between the two campaigns. Two-thirds of that money was spent by outside groups.

When voters arrived at polls on Tuesday, there was no clear indication of who had the majority. The latest Elon University Poll had Hagan leading Tillis by a margin of just 4 percent. Hagan maintained a slight lead over Tillis throughout the campaign, despite a late surge by the Republican candidate.

Supporters of Tillis who came out to the election party at the Omni Hotel in Charlotte were optimistic at the beginning of the night.

“Hagan’s tough,” said Justin Stewart, a Charlotte resident who was at the hotel. “I believe in the voters, and if we’re still in charge, we’ll do alright.”

Others were convinced Tillis’ experience as North Carolina’s Speaker of the House would serve the state well.

“To me it all comes down to record,” said John Stewart, Chairman of the 9th district for North Carolina GOP. “In four years, Tillis has passed tort reform, corporate tax reforms, corporate tax code. Hagan, in the past six years, all she has done is be the deciding vote on Obamacare.”

Throughout the race, Hagan portrayed herself as a moderate candidate, though she received continued support from President Barack Obama.

This resonated with some North Carolinians, like Jill Kazura, a former state employee.

“Hagan is moderate, and she’s willing to listen to all sides,” Kazura said. “That’s something we haven’t seen in a while. This stalemate in Washington has got to stop.”

The Tillis campaign capitalized on Hagan’s alignment with Obama on 96 percent of the issues including the Affordable Care Act, as something that would negatively impact the state.

Libertarian candidate Sean Haugh hovered at about 4 percent of the vote throughout the evening.

Walker and Fjeld faced off to replace former U.S. representative Howard Coble, who recently retired after 30 years in office. Walker led the race early on and maintained his advantage right up until polls closed about 8:15 p.m.

With 16 percent precincts accounted for, Walker was declared winner with 59 percent of the vote shortly after the polls closed.

Voters came from across the state to celebrate with the candidates they supported. John Trymosky, a Rockingham County resident, drove 20 miles to support Walker and to work in the polls Tuesday.

“His ideas to make changes in Washington were very positive,” Trymosky said. “He’s going to be a terrific congressman.”

Republican Renee Ellmers won the seat for the 2nd Congressional District over Democratic candidate Clay Aiken. She took 59 percent of the votes over Aiken’s 41 percent.