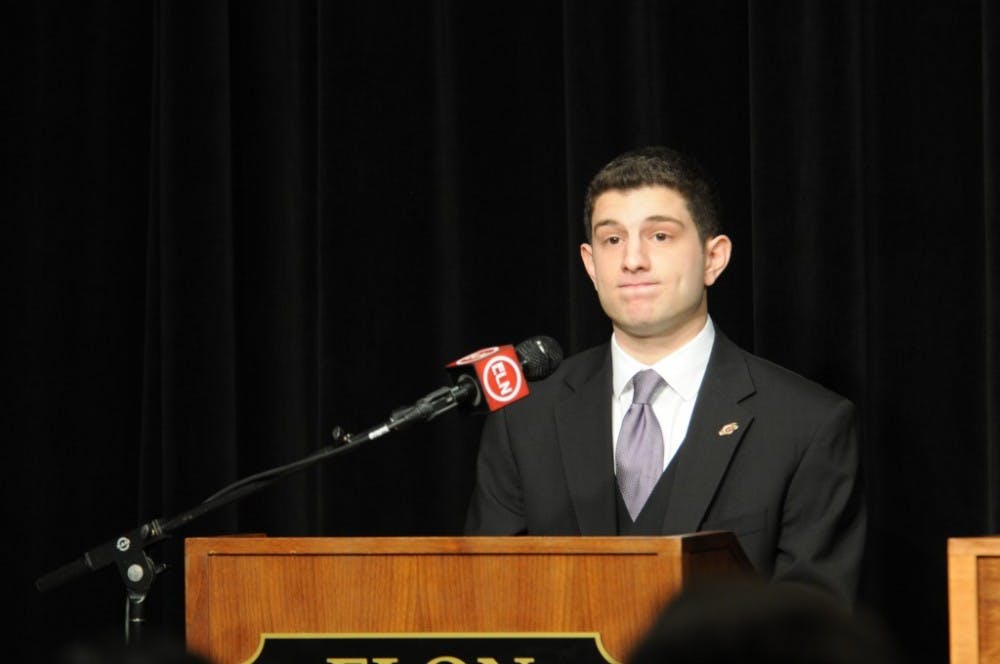 During a February 2014 debate with his then-opponent Jessica Petrillo, Incorvia relied heavily on his three years of SGA experience in favor of his presidency. File photo by Caroline Olney.

Joe Incorvia addressed the Elon University student body for the first time Aug. 2, 2011, weeks before arriving in North Carolina to begin his freshman year. From his home in Connecticut, he asked the members of the Class of 2015 via a Facebook video how they wanted to be remembered and how they could use the resources at Elon to achieve their goals.

Incorvia’s Facebook post garnered 129 likes and 51 comments, one of which urged him to run for president of the Class of 2015. He did and hasn’t lost an election since.

Incorvia followed up terms as freshmen and sophomore class president by taking on the role of executive vice president his junior year and then striding in the position of executive president of the student body as a senior.

Not a lot has changed about Incorvia since he made that video. In fact, the points he made back then about the Class of 2015 developing bonds and growing close together are reflected in his time as president.

“Our major goal is to reach out to the student body and make sure that everything we do is coming from the students and is organic from the campus and is able to benefit this campus,” Incorvia said.

This approach to SGA is something that Jana Lynn Patterson, the associate vice president for student life and faculty advisor for SGA, said is more of a grassroots effort than she’s seen from past presidents.

“They’re really about going to the people and talking to them,” said Patterson. “It’s more about involving and getting input from as many people as they can.”

In 2013, Incorvia led the charge in changing Elon’s constitution, removing some of the executive branch’s power and shifting much of the authority to the Senate. He said the change has helped senators become better leaders and incorporated more representation from the student body.

“We want them two, three years from now to be the leaders on campus,” Incorvia said. “We do that by letting the senate pioneer a lot of our initiatives. The representatives of the entire student body should have the majority of the power.”

His bottom-up approach isn’t the only way Incorvia differs from past presidents.  Typically, SGA leaders pursue degrees in political science or business. Incorvia chose biochemistry. There’s not a lot of time in between the hours he spends in the lab and the hours he spends in his office. On any given week, he attends 10 meetings on top of his day-to-day tasks.

Patterson said academics take priority over SGA responsibilities, but there’s never been a problem with Incorvia.

“He just handles it,” she said.

Now, Incorvia is focusing on leaving SGA in a good place when he graduates. Before stepping into the office of president, his strategy for student government was action-based. This year, he’s concentrating on building a foundation for success by helping students gain an understanding for what SGA is and continuing the administration’s initiatives for civic engagement and an inclusive community.

“What I would love to see is that SGA has a clear definitive direction of where it wants to go in the next five years,” Incorvia said. “It all starts with shaping our narrative and strengthening the bonds we have between one another, starting with building pride within each class and growing to having pride in our school.”