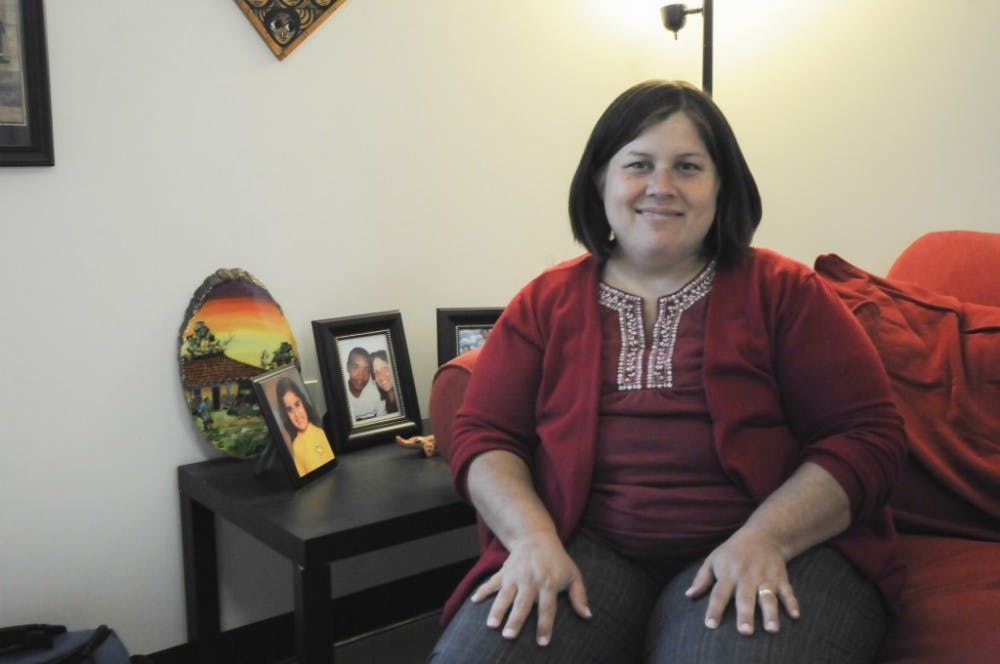 Bravo moved into the Isabella Cannon Pavilion in the fall of 2013. She said she is rarely woken up by noise outside of her apartment. Photo by Caroline Olney, Photo Editor.

For a majority of the residents in the William R. Kenan Jr. Honors Pavilion, there was nothing unusual about a fire drill. As everyone began to leave the building, two of its residents stayed behind.

Sameule Pardini, assistant professor of Italian, was not worried about his class being interrupted — he wasn’t teaching. He was worried about the alarm waking his seven-year-old son, Dante.

“There was this incredibly loud noise, like there was an attack on the Pentagon or something,” Pardini said. “Everybody was running out of the building, and Dante was sleeping. Thankfully, he was allowed to stay in bed.”

For the past three years, Pardini, his wife Tara and their son have been living in the Honors Pavilion. Pardini is one of a handful of faculty members who live with their families in residence halls across campus as a part of the Residential Campus Initiative.

The Residential Campus Initiative is a multi-year initiative aimed at “reconnecting living on campus with the core values of the university,” according to the Elon University website. One of the main goals of the initiative is to build enough housing on campus for 75 percent of the student body. Nearly $100 million will be invested into the initiative for facilities, staffing and programs.

“The purpose of it is to make the campus a space where students are all always learning and to make it intentional that students recognize they are always learning, not just in the classroom,” said Alisha Bowers, residence life fellow for the Historic Neighborhood and Class of 2013 alumna. “When you have everyone living together like that it immediately heightens the intellectual climate.”

A part of that initiative is to have faculty and staff living among students — a  goal that has already begun to come to fruition. Bowers, who lives in West with her husband,  is one of two residence fellows who live on campus, in addition to the assistant directors of residence life who live in each of the seven neighborhoods.

“I think it’s a real neat connection to have with students for them to be able to interact with me when I go to the gym or eat dinner,” she said. “We’re all living in the same environment together, so I think there’s something to be said for that.”

Vanessa Bravo, assistant professor of communications and adviser to the International Fellows, currently lives in the Isabella Cannon Pavilion with her husband, Mussa Idris, pre-doctoral fellow and instructor of anthropology. Bravo began living there in the fall.

“I was investing a lot of time at Elon, going to many of the speakers, films and concerts,” she said. “I was here a lot and about to start advising the international students. When the university offered this opportunity to me I thought, ‘This would allow me to be much more aware of what is happening on campus.’” https://www.youtube.com/watch?v=cJ0SggN_gw8&feature=youtu.be Though Elon is just starting to increase the number of faculty living on campus, the concept isn’t new.

“I’m thinking about overarching structure and ways of learning the lines of academic engagement outside of the classroom and developing students as global citizens,” Allocco said.

Allocco is the first person to serve as a faculty director in residence on campus. The school will be hiring three more for the Colonnades, Danieley and Historic neighborhoods for the fall.

Every residential area will be led by a Neighborhood Association that is co-chaired by an assistant director of residence life and a faculty director or member. Each association will be programmed differently depending on the theme and population of the neighborhood.

“We have a neighborhood plan that talks about intellectual culture, personal development and community understanding and skills,” Allocco said.  “These reflect the goals of Elon’s core curriculum and they’re developmentally appropriate for largely first-year students.”

The theme for the Global Neighborhood this year is “Religion and Conflict.” Allocco coordinates rotating activities every Tuesday. The first Tuesday every month is a house dinner in which all students in the neighborhood are invited to eat an international meal and engage in a lecture and discussion led by faculty members. On the second Tuesday, organizations and departments visit the residence halls to hold informal conversations about topics dealing with their entity. The third Tuesday involves events organized by student mentors such as RAs, Cultural and Linguistic Mentors and Residential Learning Assistants, and on the fourth Tuesday, the neighborhood shows an acclaimed international documentary film.

Junior Madeline Monaco, an RA in Global Building 4, said the events made faculty more relatable and, as a result, were something she wishes she’d had her freshman year.

“The Tuesday events were the most visible element of the Residential Campus Initiative. The variety of events that are offered, the different faculty who participate and the varying times of the events are all reasons for which the events have seen success this year,” she said.

Freshman Alex Vandermaas-Peeler, who lives in Global Building 4, said the neighborhood is leading the way for Residence Life programming.

“The Tuesday events are a really fantastic way to connect what we are learning inside the classroom to our living situation,” she said. “It is really significant to have programming that is so enriching and challenging.”

Bravo, Pardini and Allocco all said their roles have expanded since residing on campus, and it has only helped their relationship with students.

“I’m able to have lunch and dinner with students and know them on a much more personal level,” Bravo said. “You’re walking into Moseley and a student has a quick question. Those types of interactions aren’t formal and don’t necessarily happen all the time, but they accumulate quickly.”

Pardini agreed with Bravo, saying that living in the Honors Pavilion has been an enriching experience.

“I see the students as they are outside of the classroom,” he said. “We see each other as regular people. I get to know them well and understand their problems. I get to know their fears [and] hopes and see how they grow intellectually from one semester to another.”

“I don’t understand this as a separate role so much as a complementary role that really enables me to expand the venues in which I teach,” she said. “It gives me an opportunity to model intellectual inquiry for the students all the time.”

As for any additional benefits, Bravo said there’s always the chance she can impress her colleagues.

“Sometimes I run into professors on weekends who are on campus for certain events, and they might think I am working all the time,” she said.