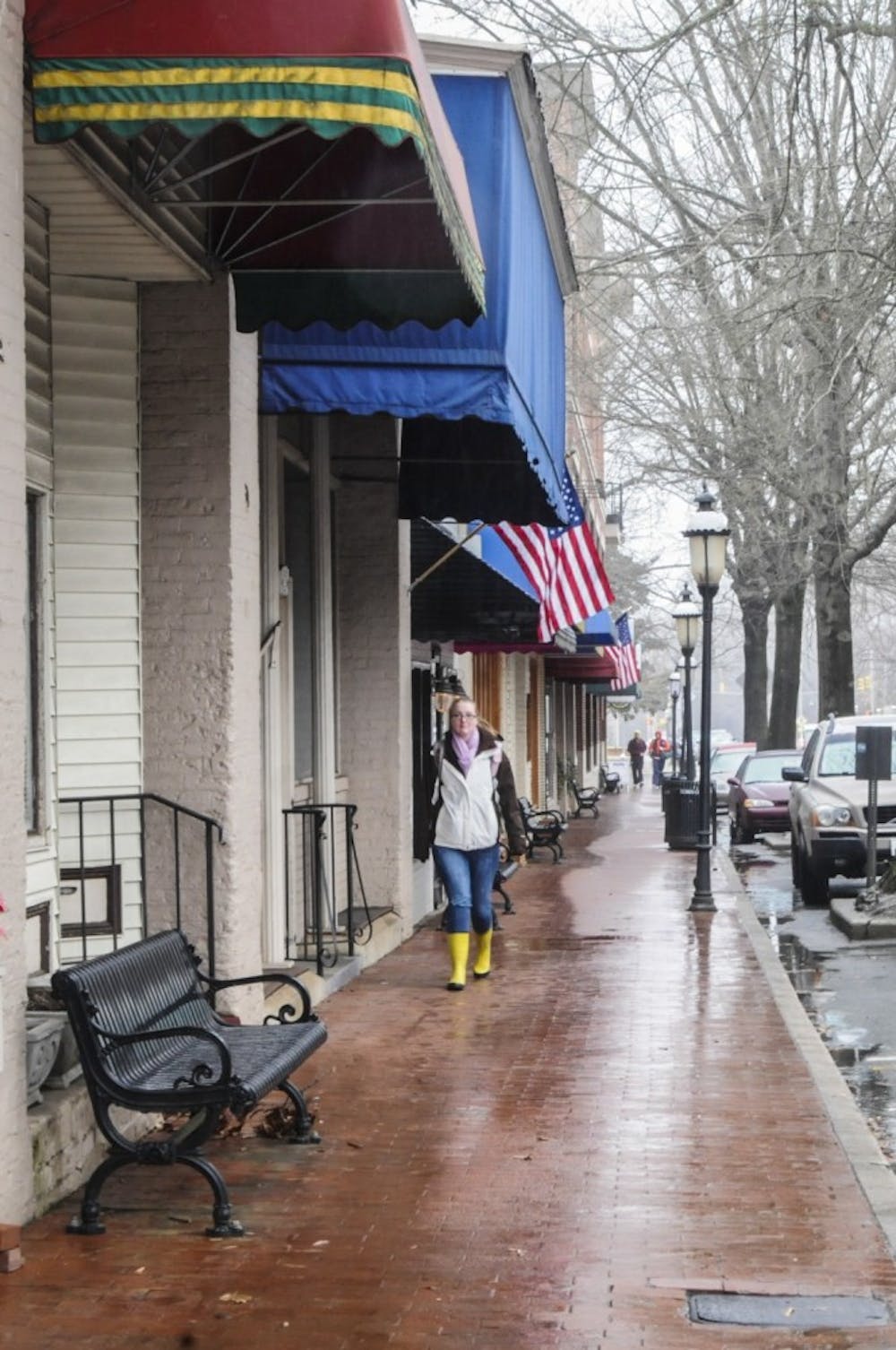 Even on rainy days, students pound the pavement outside Lebanon Avenue shops, but the streets become much more deserted in the summer months. Photo by Caroline Olney, photo editor.

The Town of Elon released its first downtown master plan two weeks ago. The plan calls for an eight-block change to the downtown area bordered by Williamson and Manning Avenues to the east and west and Haggard and Lebanon Avenues to the north and south.

The proposal plans for 10 mixed-use buildings to house retail and restaurants on the first floor and offices or residential space on the top floors. The area would surround a green space called Town Commons.

Victoria Toulouspas, manager of Mynt, a clothing boutique, said she hopes the new downtown area would bring in more money to the area that isn’t solely based around Elon University.

“It would bring a lot more foot traffic to downtown Elon,” she said. “I love seeing all of the students walking around, but it would also be nice to have more for the Elon-Burlington community.”

Peter Ustach, co-owner of Fat Frogg and Pandora’s and an Elon alumnus, agreed with Toulouspas and said he’s all for anything that can draw more traffic to Elon.

“The way I operate both Fat Frogg and Pandora’s is I look at operating everything in a 9-month window,” he said. “It is a seasonable business if I take 5,500 students who leave the second, third week in May, and faculty and staff as well, you are probably accounting for 6,000 people who are up and gone.”

“The Town of Elon needs to come together with the university to understand that it is a seasonal environment,” he said. “All restaurant owners ebb and flow seasonably here. If they want businesses to be self-sustained, they have to work out the seasonality issue. In the summer it’s not enough for these businesses to operate in the black.”

Unsurprisingly, Pandora’s and Mynt relies heavily on business not only from students, but also from other members of the university. Ustach said around 70 percent of Pandora’s business comes from the university. Mynt and Fat Frogg, on the other hand, sit at about 50 percent.

“Mynt has a great Burlington clientele,” Toulouspas said. “A lot of moms and daughters in high school and people who are passing through are loyal customers.”

Unlike Pandora’s and Mynt, the Acorn Inn is located among the eight-block area that would be torn down if construction were to begin. Brown said this is the first time his business’ property has ever been located on a plan without the inn included.

“I’ve never owned property in a thirty-year plan when my property isn’t on the space, so I don’t know what to expect,” Brown said. Brown said he is concerned the plan is sacrificing practicality for aesthetics.

“Everybody’s excited to see green and centralized living space that’s idealistic and utopic,” he said. “There’s a price to that upfront, buying individuals out and ongoing maintenance of the space that’s not contributing to the tax base. It’s ‘Field of Dreams’ stuff: if they build it, they will come.”

Despite the short-term hurdles that need to be cleared, Ustach said the changes to downtown Elon would be beneficial after the initial hurdles.

“You might not see it five years after it happens, but there will probably be some years in between where there is struggle happening,” Ustach said. “In the long run, it will be good.”