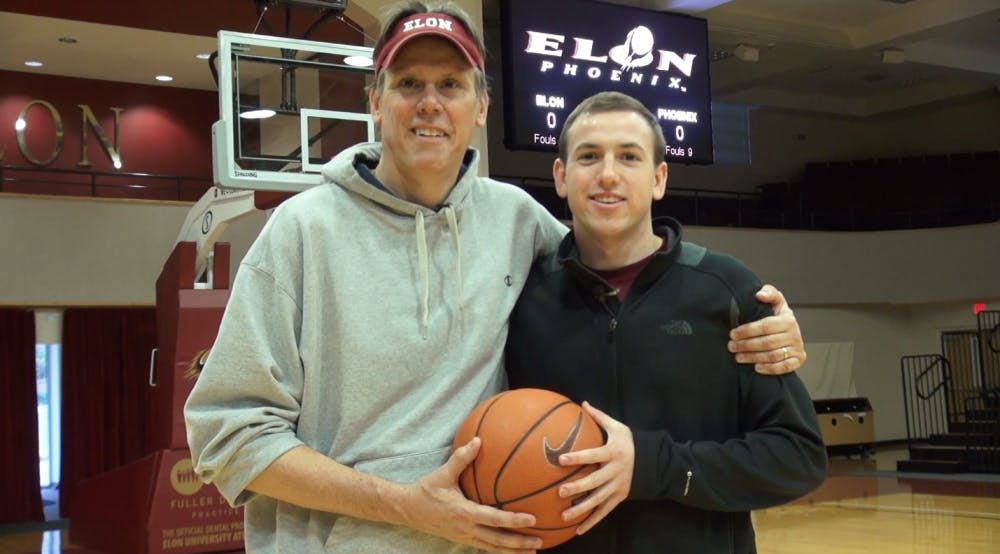 With less than a week left in his collegiate basketball career, senior guard Jack Isenbarger has a lot to reflect on. He has come a long way since making his first appearance in the maroon and gold in 2010.

"It's been an amazing four years here," he says. "If it weren't for basketball, I wouldn't be here at Elon today."

Isenbarger says he probably wouldn't have made it to Elon without the help of his father, Phil Isenbarger, either.

Phil played four years at Indiana University under hall-of-fame head coach Bob Knight, winning an NCAA Division I National Championship with the Hoosiers in 1981. But when he finally hung up the uniform, Phil decided to put on a new one: the coaching uniform.

"My dad has always been my coach," Jack says. "He instilled the importance of hard work and skill through basketball. It's something we've always bonded over and we're passionate about."

And Phil wouldn't give up coaching his son for anything in the world.

"To be able to coach your kids is really, really special," he says. "And of all the things that were rewarding that came from coaching, none were more rewarding than coaching (Jack)."

Even with a national championship under his belt, Phil still thinks Jack is the better basketball player.

"He's just a much better player than I ever was," he says. "So that's been gratifying to see."

"At first when he said that, I didn't believe it," says Jack. "I was just thinking that's just a proud day saying 'Oh, my son is better than me.' I kind of pushed it off and thought it was words for the win."

Regardless of how things pan out next weekend in Asheville, Jack is just happy he's been able to share his basketball journey with his dad.

"I've been blessed to have my dad there along the way, the whole time," says Jack. "When Dad's in the stands, you want to play for him a little harder. You want to make him proud, just like any kid who wants to make their dad proud."

Jack will take the court at the U.S. Cellular Center this Saturday against Western Carolina in the first round of the 2014 Southern Conference Tournament. First tip is set for 2:30 p.m.