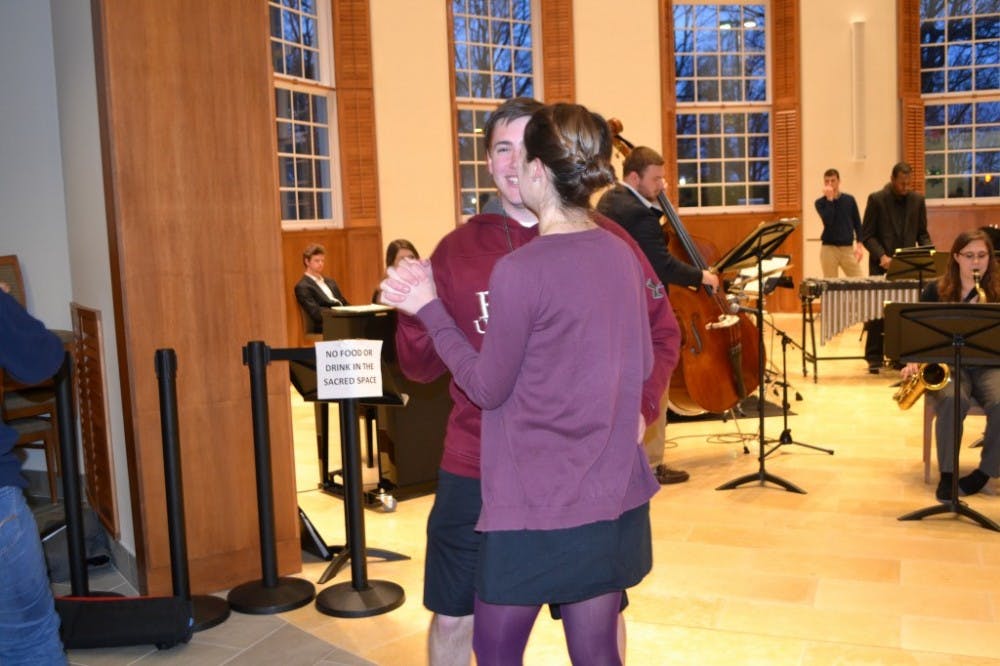 Mardi Gras (the French term for Fat Tuesday) is a tradition in the Christian faith, celebrating the time before the Lenten season. Mardi Gras celebrations typically take place the night before Ash Wednesday, when Lent officially begins.

CCM minister Gerry Waterman said the event was very special to him.

“It was so nice to have all these people together sharing frivolity and festivities,” Waterman said. “We are all a Christian family, and that is what it felt like tonight.”

Attendees dined on a traditional Mardi Gras feast of chicken gumbo and rice, with king cake for dessert. King cake is a cinnamon cake with a baby - representing baby Jesus - hidden in it. Whoever gets the baby supposedly gets good luck along with it.

“The king cake was really fun.” CCM sophomore Allie Kornacki said. “It was so delicious.”

The Elon Jazz Ensemble provided live music throughout the night.

“Having live jazz was the real deal,” Waterman said. “It made the atmosphere so much better.”

“Gerry and I started talking about how we could come tougher, and Mardi Gras seemed like a wonderful way,” Shoemaker said. “Many people from the community also showed up, and that was our hope. We wanted to make an event that would be enjoyable for everyone.”

LEAF senior Julie Tonnesen attended the event and said she was pleased with how everything came together.

“It was a great way for CCM and LEAF to come together and kick of the season of Lent,” Tonnesen said.

Kornacki said she was surprised at how many people came to the event.

“I was really impressed with the turnout,” Kornacki said. “I think everyone had a good time.”

Both Waterman and Shoemaker said they considered the event to be a success.

“I think it was a smashing success,” Waterman said. “It was wonderful to have so many people of different denominations coming together to share this special time.”