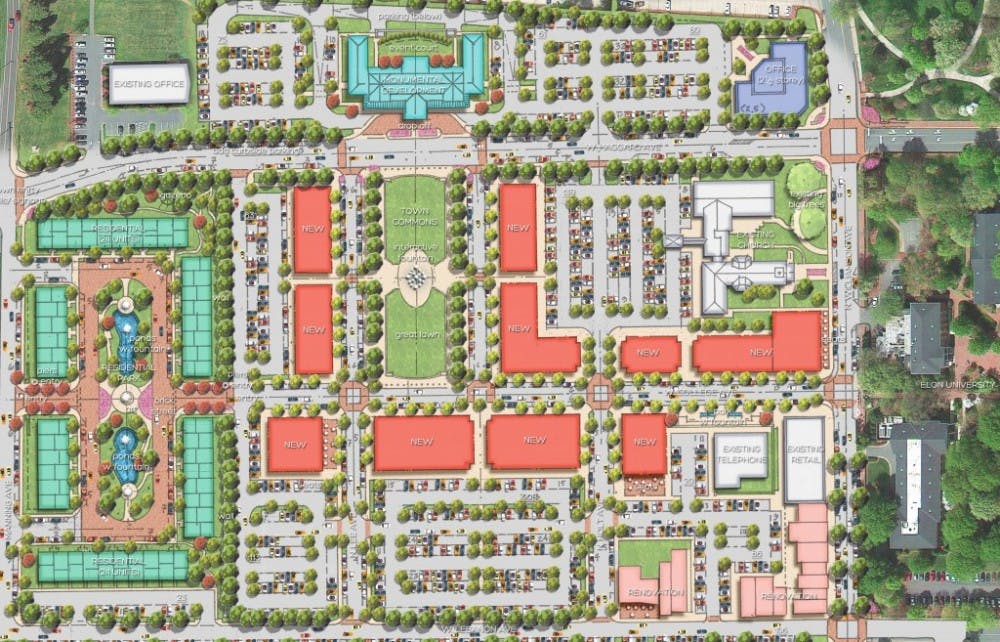 The master plan for Elon's eight-block downtown radius will be voted on March 11. Photo courtesy of Town of Elon.

The Town of Elon has proposed a new revitalization plan that would restructure the eight-block area known as downtown Elon.

The plan calls for the construction of 10 mixed-use buildings, six residential buildings, an office space and a civic/hospitality space.

The first floor of the mixed-use buildings will house retails and restaurants, while the upper floors will serve as either offices or residential spaces depending on the building. The area will surround a green space called Town Commons. However, the plan is subject to change.

Davis Montgomery, a member of the Elon Board of Aldermen, said the board began to ask why businesses didn’t want to move their locations to downtown Elon. As a result, a committee was formed four years ago to discuss the revitalization of downtown Elon.

Recently, the committee began to take bigger steps into having the plan come to fruition.

“Within the last year and a half we began to look at this plan more seriously,” Greene said. “We had different stakeholders and citizens come in so we could get a feel for what they wanted from a new downtown space.”

Following their input, the committee sent a proposal out to six to eight firms to come up with a master plan for downtown Elon.

“We took a look at what their response to our proposal looked like,” Montgomery said. “We [threw out] the things we didn’t like. We had to tell them exactly what we were looking for to get a decent bid in.”

Greene said the committee wanted the area to be a different template from the university’s design but still complement it.

“The committee wanted to establish a separate downtown area because the downtown isn’t going to rely on the student population,” he said.

If the vote passes, Greene estimated the plan will take 10 to 20 years to complete, but there is no intention to let the project go to waste.

“It’s a marathon, not a sprint,” he said. “We don’t want it to be something that sits on the shelf.”