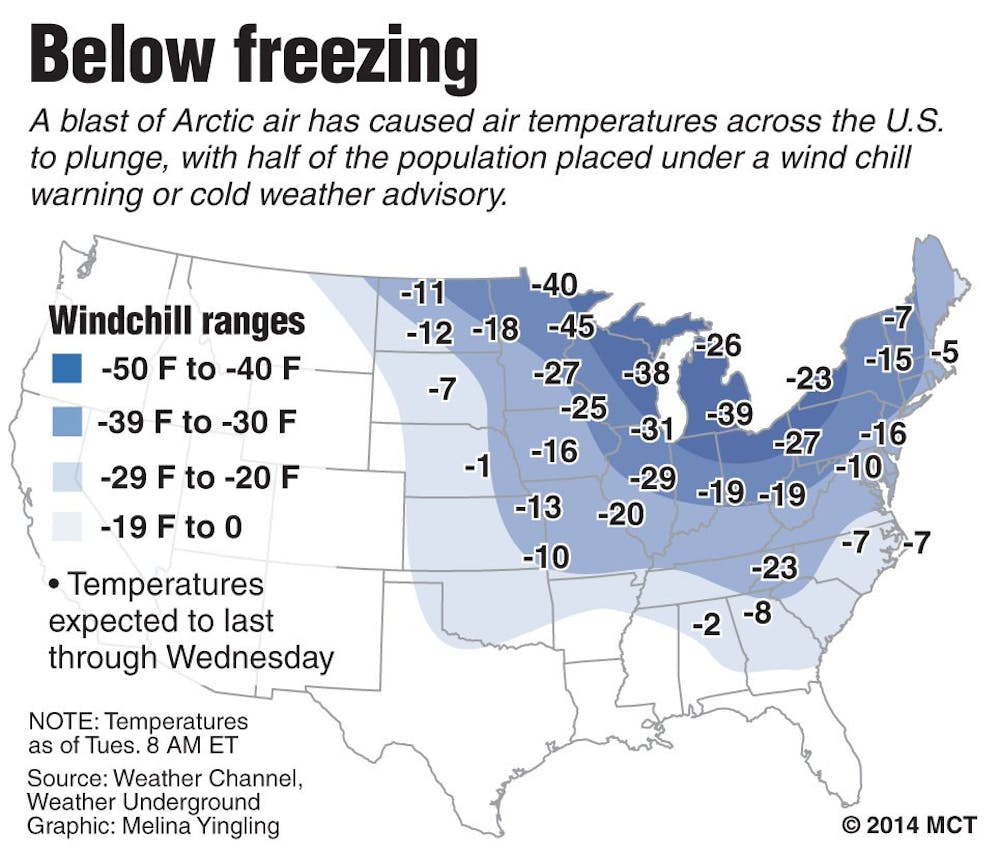 Map of the U.S. showing Tuesday wind chill temperatures throughout the lower 48 states; wind chill advisories and warnings are in effect for 32 states from Montana to southern Florida. MCT 2014

With WINTERSTORM, by MCT

On Monday, students received an email from Smith Jackson, vice president for student life, informing them it was OK if they couldn’t make it back to campus before classes started. After record-breaking winter weather swept across the country, many students were left stranded.

In the email, Jackson advised students who couldn’t make it back for class to email him so their professors could be notified. He also informed students that they would not be penalized if travel conditions were the cause of their absence.

According to USA Today, a polar vortex caused the blustery temperatures throughout the country. A polar vortex is a strong area of low pressure that usually hovers over the Arctic, but counterclockwise winds pushed the frigid air into the United States, affecting travel plans and flights.

Elon sophomore Chloe Skeadas, from Greenwich, Conn., was supposed to return to campus Monday night before classes began. But due to several delays and cancellations, she didn’t arrive until Tuesday night.

“It was so frustrating, my flight kept getting delayed and finally was cancelled on Monday and rebooked for Tuesday night,” Skeadas said. “I emailed my professor but now I feel behind after missing the first class.”

In addition to creating snow and ice, extremely cold weather can freeze equipment and fuel and make it impossible for employees to remain outside. According to Business Insider, airports in the Midwest and the Northeast have seen the most cancellations.

While several airlines offered accommodations and rebooked cancelled flights, Elon students were frustrated by not being able to attend the first class of Winter Term.

Jonathan Jones, adjunct communications professor, had one student who missed half of his first class due to flight delays. Since it was a unique travel problem, Jones adjusted his attendance policy.

“Usually, if a student missed half of a class I would count it as an absence, but in this case I won’t count it against her,” he said.

According to USA Today, airlines were planning to be fully operational again by Tuesday night.