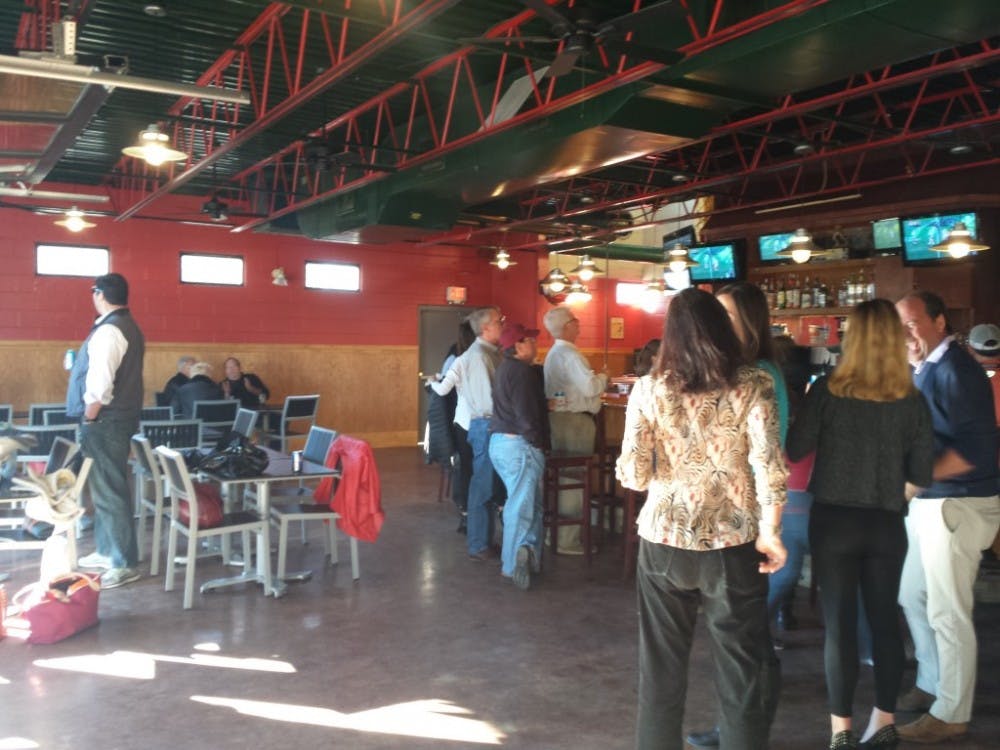 Populated by a different crowd during the day, West End remains swamped with students most nights. Photo by Meghan Leonard, senior reporter.

West End’s new owner Harold Hill bought the bar at the end of the summer with the goal of creating more variety in the Elon community. He not only wanted attract students, but also alumni and community members.

The first visible change is the updated outdoor patio, complete with heaters, new furniture and an iron fence, replacing the old brick wall.

“I want people to be able to see inside and see their friends on the patio,” said Hill. “The old brick wall made it feel like a prison and no one could see in or out.”

Moving inside, Hill knocked down the wall that used to cut the bar in half to create more openness and flow. He also switched the stage and dance floor to the right of the bar, which eliminates the need to fight through a huge crowd to get a drink, he said.

“We didn’t want people to have to wait twenty minutes to get a beer,” said Austin Davis, Hill's girlfriend who is helping manage the bar. “This way it's easier for people to move around and get to the bar.”

They also created more space by eliminating some of the unused games, leaving only a pool and foosball table. Hill also installed brand new bathrooms after receiving numerous complaints about the old ones.

Elon sophomore Noelle Walser said she is pleased with the makeover.

“I like how open it feels now, and also the heaters outside are a really nice touch,” she said.

Hill and his girlfriend, Austin Davis, are both Elon University alumni. Hill’s dream was to transform West End from a run-down spot students frequented on Tuesdays and Thursdays to a nice bar and restaurant that the entire community would enjoy.

Starting in February, West End will be offering a revamped food menu, which will include salads, flatbreads, tacos, quesadillas and other options for students on a budget.

Hutson said all of the food will be made from scratch, and they will be offering a lunch and dinner menu. They are also exploring possible late night options. Because the new owners didn’t want to just offer fried food, the new options will go for more of a variety.

Hill also wants to encourage people to try a variety of craft beers. He will be starting a series called Beer 101. He is going to bring in a beer master once a month and for a flat rate, people can taste all of the different beers.

As a beer enthusiast, Hill wants people to become more educated on the process of making beer, as well as the different tastes each brew has to offer.

Since West End’s re-opening, the response from students and community members has been expressed in patrons, not all of them happy. Last Thursday night, the bar got so crowded it exceeded capacity. Huge crowds gathered outside unable to get in.

Huston said that at 12 a.m. there were only twenty people inside the bar, and nine minutes later they had reached capacity at 12:09 a.m.

Senior Stephanie Seligman, bought her wristband for entry into West End hours before she arrived at the bar at 12:15 a.m. However, due to insane crowds, she never made it into the bar.

“I was extremely frustrated with the management. I think it's poor business to sell wristbands and then not have an expedited line to get in,” said Seligman. “Honestly, there’s a reason upperclassmen are starting to choose other establishments. They should have taken in account the number of wristbands they sold earlier that evening.”

“I feel like everyone all comes out at once at 12, and that’s what creates the huge line issue,”  Huston said. "The new West End staff encourages students to come earlier so they can have more time to have fun and in turn, decrease the wait time outside.”

Currently, the capacity for West End is only 237 people. Once the fire marshal reevaluates the bar after more open space was created, the capacity the bar should be able to accommodate more patrons.