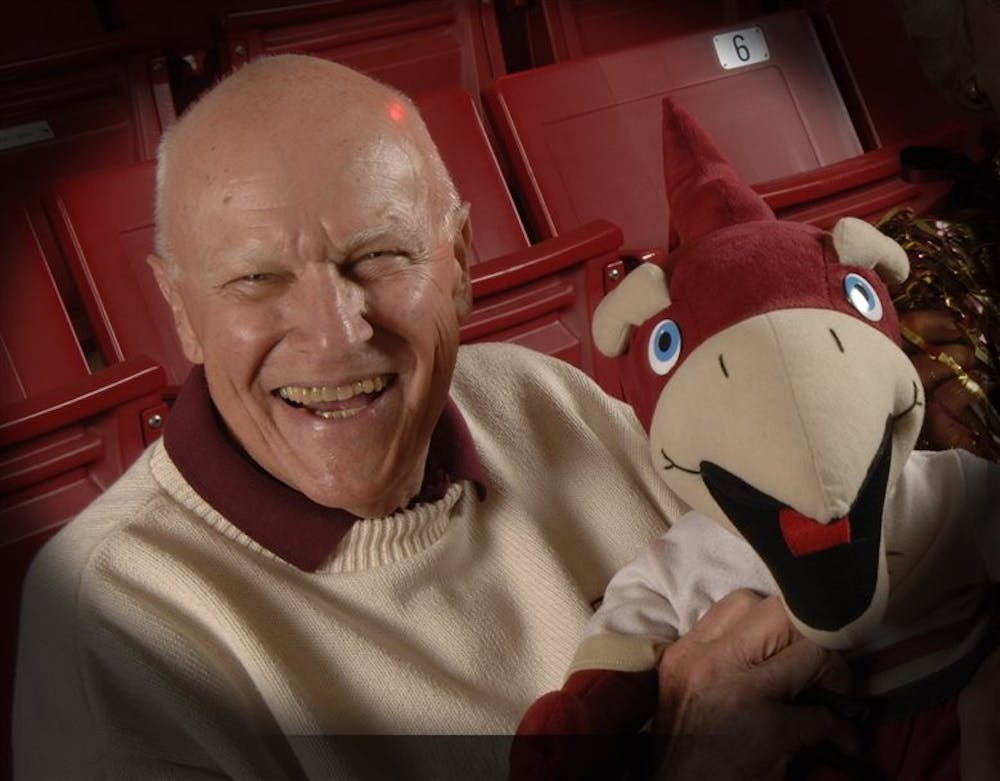 Rev. John G. Truitt '53 was an avid Elon athletics fan. He and his wife Dolores Hagan Truitt '53 even celebrated their 50th wedding anniversary at Rhodes Stadium in 2004. (photo courtesy: E-Net)

Rev. John G. Truitt, distinguished Elon alumnus, died today at age 81. Truitt graduated from Elon in 1953 and died after a lengthy illness, according to an E-Net article.

The Truitt family has been involved in Elon and its religious life since the early 1900s. The Truitt Center for Religious and Spiritual Life is named for its founder and benefactor Edna Truitt Noiles. John G. Truitt continued his family's legacy during and after his time as a student.

Truitt studied philosophy and religion at Elon. During his time at the university, he balanced his double major, sang in the choir and participated in student government. He even met his future wife, Dolores Hagan Truitt, during cheerleading try outs. The two graduated together in 1953 and married a year later.

"After Elon, I went to Princeton Theological Seminary for year," Truitt told Paul Zarbock in a 2003 interview at University of North Carolina Wilmington. "But I had met this marvelous girl named Dolores Hagan. We were cheerleaders together on the squad at Elon, and so after a year at Princeton, I just felt like I needed to go back and bring Dolores with me."

He then earned his degree from New York's Union Theological Seminary. Truitt and his college sweetheart would remain involved at Elon for the rest of his life.

After graduation Truitt came back to Burlington, N.C., where he served as pastor, in addition to Brookside, N.J. and Chesapeake, Va. In 1961, he began a 26-year stretch of military service as the chaplain of the United States Air Force. His service took him overseas to Vietnam in 1967 and 1968 where he was promoted to Major.

"I found Vietnam for a chaplain was a marvelous experience," Truitt said in the UNCW interview. "When you're in a war environment, the chaplain's mission becomes more important than, say at Greenville Air Force Base or at Norton in California. It becomes crucial to the people that you've been called to serve. So in Vietnam, you come into full bloom if you will as chaplain."

The military awarded Truitt many times during his service, including with the Bronze Star, Meritorious Service Medal and the Air Force Commendation Medal with two oak leaf clusters.

After his retirement from the military, Truitt and Dolores continued to give back to the university. They created the Truitt-Hagan Endowed Scholarship fund for student athletes. Both Truitt and Dolores served on the National Alumni Executive Board and were co-presidents of Elon's Golden Alumni Association. The pair also donated to the university as members of The Elon Society and Order of the Oak. The Elon community can also thank the Truitts for helping to make the notable Elon license plate available in North Carolina.

Funeral arrangements have not yet been announced, but they will be posted to elonlocalnews.com when made available.