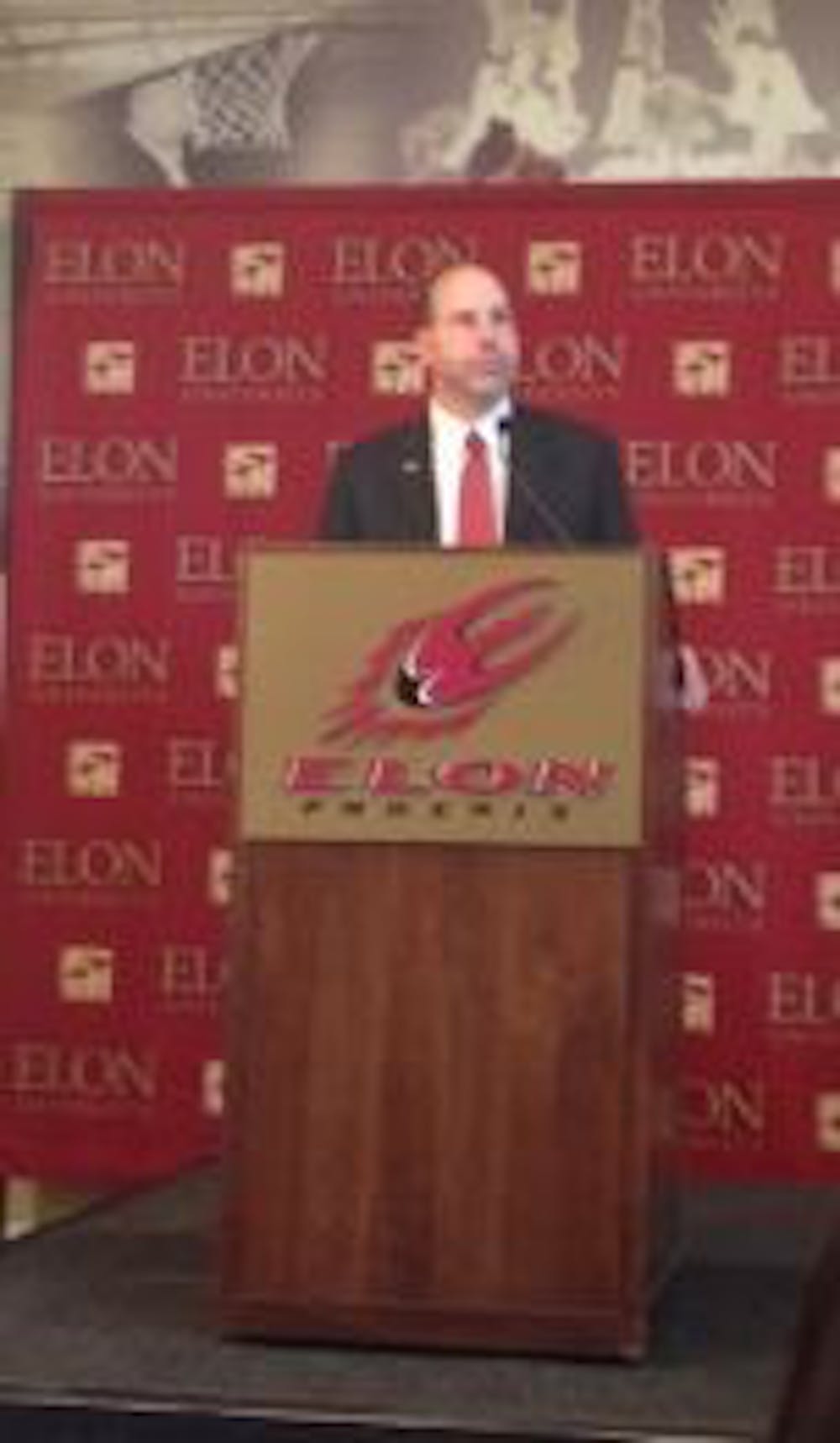 With those words, Rich Skrosky was back at Elon University. The former offensive coordinator for the Phoenix becomes the 21st man to serve as head coach of the Elon football team. In front of a packed crowed Thursday afternoon in the Walker Room inside Alumni Field House, Skrosky was introduced to the Elon community and spoke of his philosophy and vision for the future of Elon football.

“We need to ‘embrace the grind’ on a daily basis,” Skrosky said. “We need to develop grit. That’s the plan with the players- I’m embracing that and I cannot wait for that challenge.”

The press conference opened with comments from Wes Elingburg, chair of the Elon University Board of Trustees. Elingburg, who has been an Elon trustee since 2005, remarked that hiring Skrosky was a part of honoring the “Elon Commitment,” the strategic vision of Elon. That plan, which specifically calls for excellence in athletics both on and off the field, has led Elingburg and his board to “hire the best coaches.”

Following Elingburg, it was time for Dave Blank, director of athletics, to take the podium. Blank referred to the coaching search as a “learning process.” He discussed how Elon searched for a coach who would match the growing national reputation of the university.

Blank said he and his colleagues searched for a “role model,” a coach that could lead his players both in football and in life.

That search turned up Skrosky, who opened by thanking the Elon administration for allowing him to return to a university that is “second to none.”

He was especially excited to work with Blank to rebuild the program. “I not only have an athletics director I know,” Skrosky said, “But one that is committed to this program and one that I can trust fully on a day-to-day basis.”

Skrosky thanked all of his players and coaches that he has worked with in his thirty years of college football as a player and coach. “That is why I do what I do,” Skrosky said. “The impact that coaches have cannot be minimized. I take that role very seriously.”

Skrosky said that his time at Elon from 2006-10 was “a special time in my career,” and that he “grew as a person” while at Elon. He then proceeded to outline his plan for rebuilding the Phoenix.

Skrosky served as a head coach once prior in his career in 1992 at Ramapo College of New Jersey, an NCAA Division III institution. He said that he takes away the mantra of “be yourself” from “trying to be something he wasn’t” at age 27. “I know I’m a much better prepared human being in all aspects as I take on this challenge.”

He emphasized that even though some of the current members of the Phoenix were recruits he brought in, every player would start on an “even level” and be “evaluated from day one.”

His challenge to the players is simple. “You’re going to work harder than 90 percent of the adult population,” Skrosky inquired. “Are you ready for that?” He said that he would build his program as a daily process and grind, and get an investment from his players.

Skrosky said he plans to hire a full staff, “as good a staff as I can hire in the (Colonial Athletic Association),” including an offensive coordinator. He refused to indicate who some of those competitors would be.

As he concluded, Skrosky re-emphasized that his building of the program would be a process; quipping that “I don’t have any magic potion.” He plans to begin recruiting immediately, and will meet with the players on Monday, Jan. 6, when they return to campus.

“Embrace the grind” is now a part of the Elon lexicon. Rich Skrosky is back. The 2014 season kicks off on Aug. 30, 261 days from Skrosky’s hiring, with a road game at Duke University in Durham.