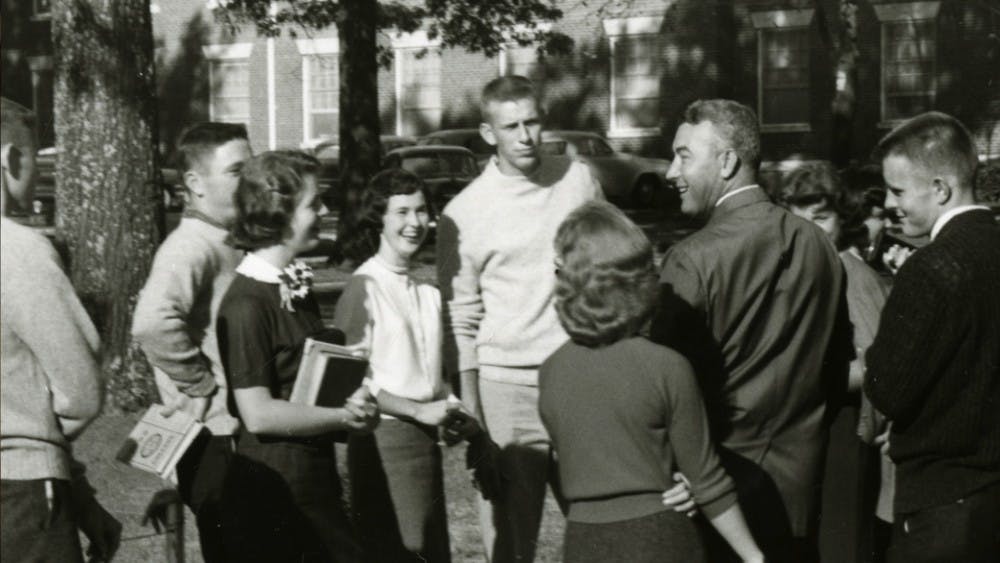 While nearly one-third of students on campus today are involved in Greek life, this wasn't always the case.

When Elon was first founded in 1889, literary societies dominated the social scene with dinner parties, plays, debates and dances.

Of the three original literary societies, Clio and Philologian were all-male groups, while Psiphelian was reserved solely for women.

A number of notable Elon alums were members in these groups, including Emmett Moffitt, who later served as Elon's third president between 1905-1911.

The original three societies were later joined by Appolo and Thalia as well before all five were disbanded in 1942.

Shortly after the literary societies dissolved, Jo Watts Williams arrived on campus just as World War II was coming to an end.

"I was the youngest of eight children, all of whom attended Elon," Watts said. "When the time came for me to attend college it was just natural."

As a student on campus, Williams held a position not so different than the one she has occupied for nearly forty years. She worked in the office of President Leon Smith.

Currently Vice President Emerita of Elon, Williams has witnessed all kinds of changes under multiple presidents in her time at the university.

"Dr. D actually hired me. Then [I worked] for Dr. Young and of course, Dr. Lambert," Watts said. "So it's been interesting to think that Elon has only had eight presidents and I've worked for half of them," she said.

As the years progressed, social life at Elon changed dramatically.

With the end of World War II, the Elon ratio between males and females changed dramatically.

"The guys were just returning so there were very few guys on campus my freshman year, then it changed completely," Watts said. "There was an influx of men returning and coming to school on the G.I. Bill."

As the dynamics changed, Elon made efforts to adapt to the changes, bringing buses to campus to drive the women to dance with the male students.

As the men began to return, women had to abide by certain rules.

Not long after Williams graduated, Kay Elder graduated in 1960. The Elon tradition remained in her family as her grandson, Nick Cook, is currently a junior and a campus tour guide.

"To pass through some of the archways that used to be part of the original walls to campus and be like 'I saw a picture of my grandmother standing under that exact arch from the 60s,'" Cook said.

Elder spoke of a different era when men were only allowed in female living quarters at certain times of the day. Men could be in West Dormitory until 8:00 p.m. and a dorm mother stayed in the building to supervise.

With more men on campus, the dress code changed to be more conservative.

"If we were dressed in gym suits, we had to wear a raincoat as we walked across campus," Williams said. "There were no shorts, no nothing. I look out the window now a days and chuckle."

The change in dress code applied to more than just gym class, even extending to formal events on campus.

"Our main auditorium was Whitley," Williams said. "We had operas and things in there, and we were expected to wear formal evening clothes."

The transition in daily dress sometimes surprises Williams as she attends events on campus today.

"I saw even adults just dressed with jeans and sneakers and thought, 'oh my dear,'" Williams said. "In 1945, we would have been banned immediately. So often, boys were required to wear a tux!"

In the past few decades, standards have begun to relax. 1977 Alum Jeff Mackenzie saw the transition in person as his time at Elon fell between two different presidents.

"Dr. Danieley retired in 1972, and Fred Young came in 1973," Mackenzie said. "Basically it was old Elon as far as going to church, going to chapel, strict cmpus, girls having to be in dorms at 9:30, and house mothers. From when I was a freshmen to a junior that all disappeared."

As the school came under new leadership, social hot spots varied, as well.

Bill's Blue Room was the first bar on campus, followed by Garrisons, and Lighthouse, which was located where Tap House is now.

"I felt if I worked harder I could get rewarded more," Mackenzie said. "I've always been fascinated by doing stuff myself. And I have that motivation that some people have and some people don't."

When he first opened Fat Frogg, Mackenzie said he was asked what kind of bar his business would become.

The current social scene both on and around campus, is a little different than when Elder was enrolled at Elon.

"We were absolutely not allowed to have alcohol on campus," Elder said. "We weren't supposed to, but there was anyway."

Despite the changes and transitions in leadership, social venues, and customs, Williams said one thing has remained the same.

"The thing that is still in place is this sense of community and the sense of caring. The values haven't changed as I can tell being here 60-something years," she said.