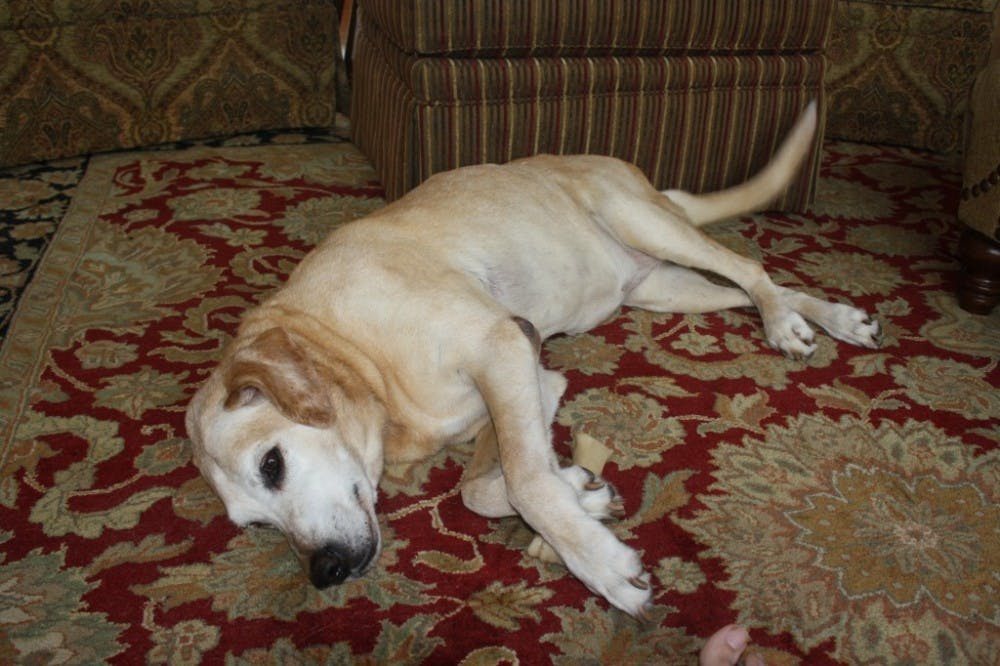 Sadie, who turned 12 on July 4, was adopted from a family of mennonites in Georgia. Photo by Jonathan Black, managing editor.

Since freshman year, walking into my house for the first time for a weekend visit or break has always been one of my favorite parts of coming home. It isn’t because my parents usually have a fresh meal waiting for me — half of the time they’re not even at the house when I arrive — or because I’m walking into a spotless home not covered in clutter.

It’s because my dog, Sadie, runs to me the minute I walk in with uncontrollable sneezes (she sneezes when she’s excited) and violent tail wagging. Sadie greets me with a burst of unconditional love and, in return, I give her a long bully rub before I even put my bags down. Or that’s how it used to be.

Sadie turned 12 in July and has slowed down tremendously in the past year. Creaky bones, arthritis and laziness all transformed the dog I thought would be a puppy forever into a crotchety old woman. Slowly, but surely, it has taken Sadie longer and longer to greet me at the door. Her run gradually morphed into a slow walk. Eventually she even stopped greeting me at the door, but her tail wagging and excited sneezing could still be heard upon my entrance.

This past weekend, Sadie didn’t even muster the energy to sneeze, much less wag her tail. The realization that I had been ignoring for so long hit me: Sadie was an old woman, like my 100-year-old grandma old.

To make matters worse, on Friday my cat Cashmere, my No. 1 frenemy, greeted me at the door before I even got the chance to approach Sadie.

For those of you that know me, you’ll know this is something that I am not willing to accept or take lightly. Let’s just say puppies and dogs are my weakness. In any movie, I’m more likely to root for the survival of an animal than I am their owner. It’s for that reason I’ve never seen “Old Yeller,” “Marley and Me” or “I Am Legend” (though that is also because I hate Will Smith).

I had been ignoring the signs for far too long about Sadie’s descent into old age. This year, she was the first of my immediate family members to be put on the seven-day pill box and developed a few age spots which aren’t helping her status as the neighborhood cougar — she often plays coy with my neighbor’s young golden retriever.

Maybe it is time for me to accept the fact that Sadie isn’t always going to be the spry young nugget that chased after ponytails and always attempted to put three tennis balls in her mouth.

Instead of mourning the end of a vibrant dog, I’ll celebrate the rest of Sadie’s life as she is, an old fart. After all, one thing has remained the same in her 12 years ­— we have loved each other unconditionally.

And if anybody is looking to adopt Cashmere … you know where to find me.