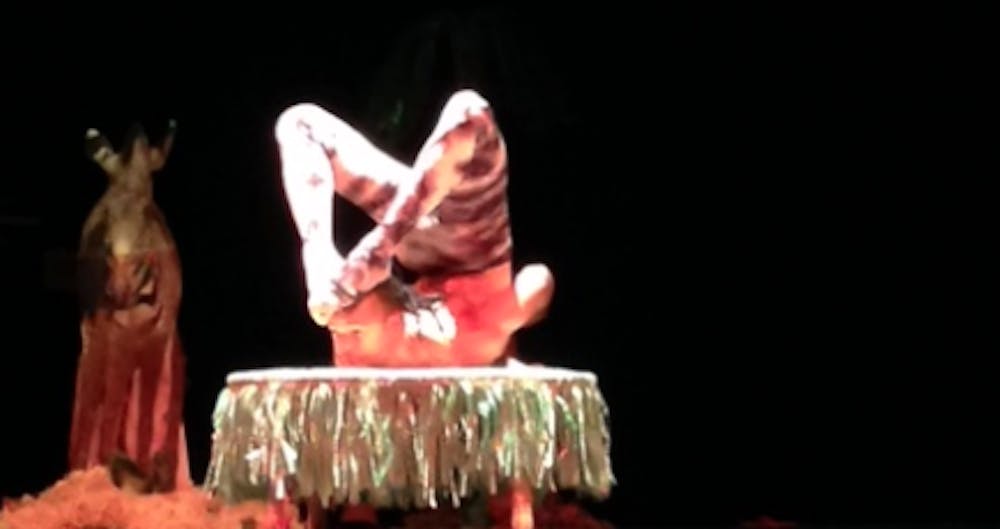 Elon's Center for the Arts welcomed the Kenyan Safari Acrobats on Sept. 24 to perform their routine of breathtaking stunts, comedy, and audience participation set to the heart-pounding music of the Kenyan Safari. The show began with a voice shouting "Welcome to Africa." From that point on, the audience was entranced.

The acrobat troupe follows the story of an American woman traveling to Africa for the first time and the interesting tribe she stumbles across. Each tribe member has a different acrobatic skill and performs multiple times throughout the show. These skills range from magic tricks, to limbo dancing, to extreme acrobatic tricks involving glass bottles and moving platforms.

Each member of the tribe played his or her role comically, much to the appreciation of the audience. One of the tricks included the tribe learning how to jump rope. The American woman attempted to teach the tribe members how to double-dutch, but they did not comply. They instead fell over the ropes laughing and refusing to take tips from the American woman. After some time of the acrobats dismissing the requests of the woman, the real tricks began. The men of the tribe performed flips and acrobatic tricks while jumping rope that startled the audience, and followed with immediate applause.

The show lasted for 90 minutes and was filled with comical skits involving acrobatic choreography. The American woman narrated the entire production and informed the audience of the different culture and style of the Kenyans. She mentioned that the Kenyan Safari Acrobats is a family-owned troupe. Karen, who plays the American woman, is married to Jacob Kalama, a contortionist in the show. Their daughter and two nephews are also part of the troupe.

Kalama was perhaps the most mesmerizing of the acrobats. During the show, Jacob stacked chairs on top of each other to climb to the ceiling of the Performing Arts Center. The chairs, stacked five in a row, shook tremendously beneath him. Jacob proceeded to climb on top of the chairs, and balance one-handed, horizontally to the stage, below.

This was not the only trick that required strength and determination. Another acrobat proved this when he balanced on top of five boards, held together by four glass bottles each, all above a moving hollow cylinder. The trick took the acrobat multiple times to master, with the audience crying out each time, worried and hearts pounding. When the acrobat finally reached the top and stood up, the Performing Arts Center shook with cheers and applause.

The Kenyan Safari Acrobats kept the audience on the edge of their seats during the entire performance and constantly showed us the values they not only established in Kenya, but also as a family.