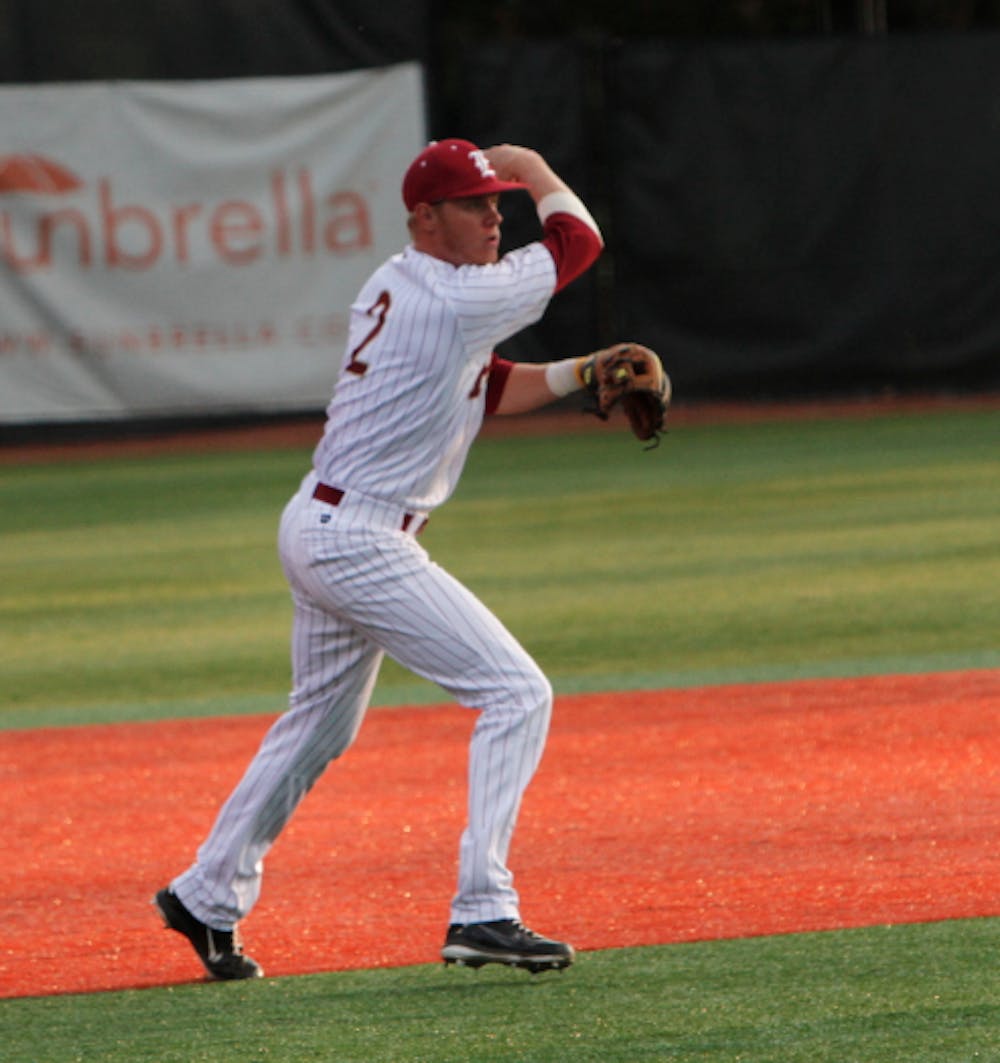 Touted as a great defensive player, Bresnahan finished the 2013 season with a .950 fielding percentage. (File photo by Al Drago)

There comes a difficult point in time when every baseball player must hang up his cleats and retire from the game. A scout in the movie “Moneyball” may have said it best.

Former Elon infielder Chris Bresnahan was “told” following the Phoenix’s loss to the University of Virginia in the final of the Charlottesville Regional of the 2013 NCAA Tournament. Bresnahan could have completely walked away from baseball, but he didn’t.

Instead, Bresnahan wanted to make baseball his life, and he has done so by becoming an assistant coach with Fordham University.

“I have a passion for baseball that I wasn’t ready to give up on,” Bresnahan said. “Ever since tee-ball, I’ve always loved the game. I wasn’t always the most talented player on the field, but I feel like I knew the game more than other people.”

Throughout his four years at Elon, Bresnahan wasn’t a star or flashy player. He even admitted it. Bresnahan realized and decided coaching was his best option to remain in the game of baseball.

“Not being the most talented, playing wasn’t really an option for me, but coaching was,” he said. “I wanted to make baseball my career and now, coaching is the way to do it.”

There was a time before taking the job at Fordham when Bresnahan was nearly finished with baseball. He didn’t get a whole lot of playing time during his freshman and sophomore years with the Phoenix. Instead of becoming discouraged, Bresnahan used his time on the bench as a tool to learn the game and get better.

Bresnahan looked to his coaching staff to learn about the game.

“I sat down by Coach Kennedy and the rest of the staff and tried to pick up things,” he said. “I was trying to keep a positive attitude. I had the opportunity to really learn the game.”

From spending time on the bench and taking in pointers, Elon head coach Mike Kennedy said Bresnahan better understood what it took to play at the college level.

“He became a better player because of that,” Kennedy said. “He’s a student of the game. He’s always learning. He’s always asking questions. When he wasn’t playing and on the bench, he wasn’t on the far end of the dugout talking about what was on television last night.”

The rest of the team rallied behind Bresnahan’s constant dedication to the team. Aside from learning the game, Bresnahan became a very vocal member of the team.

“I was elected a captain my sophomore year, so I was also sort of a leader,” Bresnahan said.

Two years after being named a captain, senior infielder Sebastian Gomez went as far as to say Bresnahan was largely responsible for the team’s turnaround in 2013 that saw them take the Southern Conference tournament championship after losing the first game of the tournament.

“He got us going in the right direction when we were struggling last year,” Gomez said. “Even if he wasn’t playing necessarily, he was on the bench standing up for guys and backing us up.”

Kennedy noticed the small actions from Bresnahan, too.

“When guys were struggling, I was sure Chris was right there picking him up and listening to us coaches talk to the guy about approaching his at-bats,” Kennedy said. “He put everybody ahead of himself.”

By his senior year, Bresnahan was a regular in the Phoenix starting lineup. Playing each infield position at some point throughout his senior season, Bresnahan used his solid fundamentals to make an impact.

“He could play all the infield positions and knew all the ins and outs of all the positions,” Kennedy said.

Gomez said he was amazed with Bresnahan’s soft hands as an infielder and believed he was “one of the greatest infielders I’ve seen.”

Bresnahan’s solid base and understanding of the game give him a strong foundation to take into coaching, according to Kennedy.

“He had some great experiences here and he learned from that,” Kennedy said. “Being a guy who didn’t play every day to a kid who really stuck to it and played every day his senior year.”

While he’s not trotting out to take his position anymore and is now stuck in the dugout with the rest of the coaching staff, Bresnahan said the transition has been “pretty easy.”

The only difficulties Bresnahan admitted to were the office aspects, including doing paperwork and sending emails. Aside from the desk work, Bresnahan said he felt he did not have a difficult transition to his new players and coaches at Fordham.

“The coaching staff is relatively young, so I’m not intimidated by a guy who has been coaching for 50 years,” Bresnahan said. “It’s not like I’m from a different generation. They’re all young guys with high energy. They’re laidback, but they’re fiery guys.”

Fordham manager Kevin Leighton is also excited by the addition of Bresnahan to the coaching staff.

“We were looking for a coach that could come in and assist us with our infielders and relate to the players,” Leighton said. “I felt that Chris fit the position the best. He comes from a winning program and I know that our players will benefit from his experiences.”

The youth factor was also something Leighton liked about hiring Bresnahan.

“I like the fact that he is younger and our players will be able to relate to him,” he said.

According to Gomez, while Bresnahan wasn’t flashy, the base of his success was the understanding of each position — something Leighton was looking to teach the infielders at Fordham.

Despite a strong foundation in fundamentals, Bresnahan looks to make an impact in other aspects of the game.

“I try to teach the fundamentals, but I also try to get into the mental side of the game,” he said. “I wasn’t always the most talented guy, but I was always thinking on the field.”

Bresnahan said he already has a specific plan in mind to attack the mental aspect of the game.

“What I’m going to try to do a lot is walk around during practice and ask different guys why they do certain things,” he said.

According to Bresnahan, his aim is to make sure the Fordham infielders are mentally prepared for each play. He said he believes most physical errors occur when a player is not mentally ready for that specific play. Leighton said he believes Bresnahan’s baseball mind also adds to his value as a coach.

“Talking with Chris, I didn’t get the feeling that he had just finished playing,” he said. “He has a lot of knowledge of the game and has shown that he has the ability to be a very good coach.”

Even with a strong baseball background, there is still a sense of uncertainty in the beginning stages of coaching.

“I am still trying to build a philosophy,” Bresnahan said. “I try to pick up little things [from] every coach.”

Bresnahan sees his own philosophy stemming from the various baseball minds he’s come across during his career.

Kennedy believes Bresnahan has what it takes to be a coach and offered some words of advice for his former player.

“The most important thing is learning that all players are different,” Kennedy said. “Be receptive and understanding. Guys are different. You can’t coach them all the same. My advice is to work extremely hard at relationships and that helps take care of your coaching part. If guys believe in you and trust you and think you have their best interests in mind, you’ll do fine.”

While only on the job for a short period of time, Bresnahan already has thoughts about how this season will go for the Rams.

“This is a year where we think we’ll make a great leap forward,” he said.

It’s a fitting prediction from a former Phoenix making a great leap forward of his own into the world of coaching.