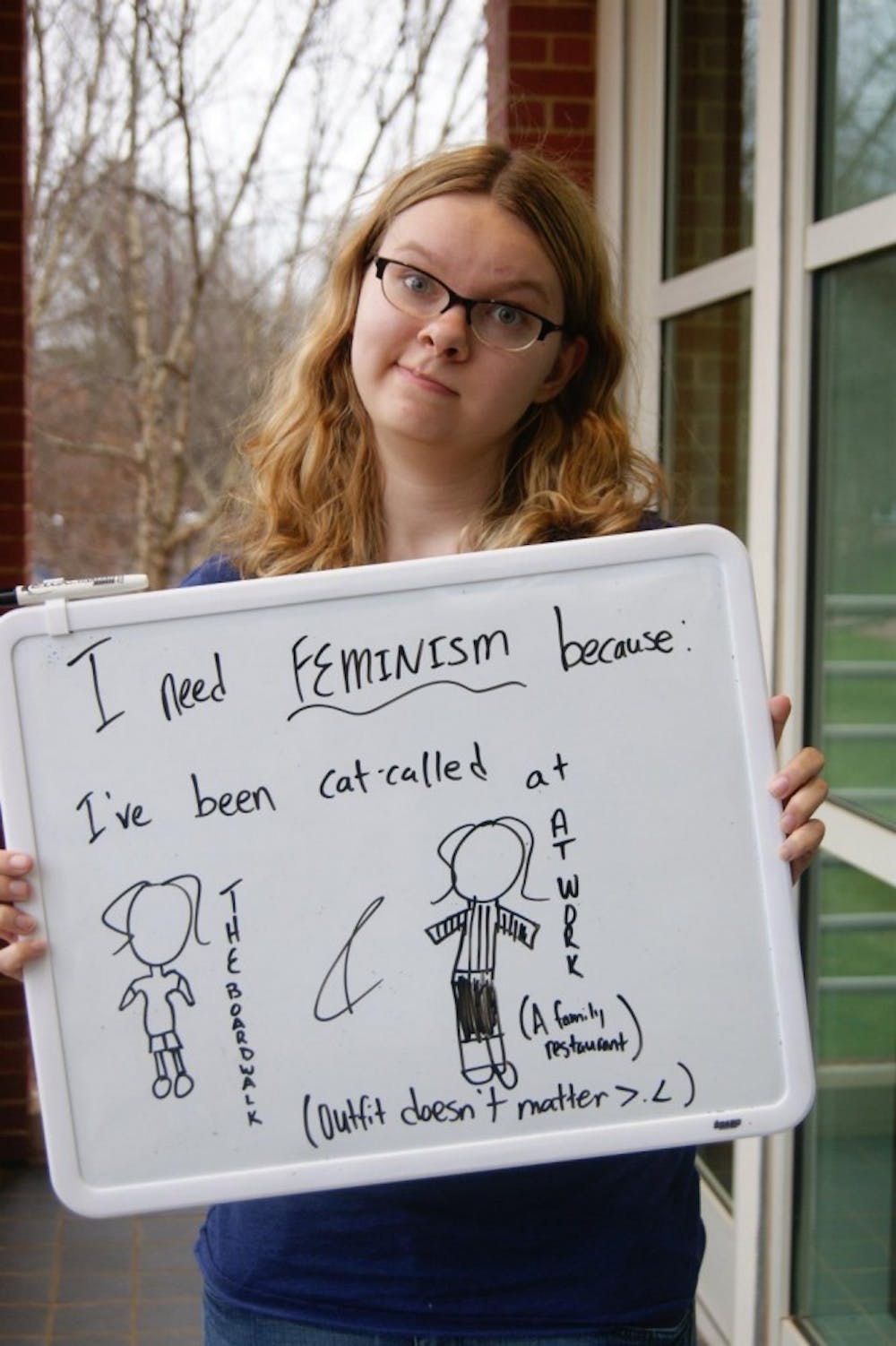 I am a feminist, and I have heard all of the stereotypical statements before. Each time I hear them, I just smack my head at all the people ignorant of feminism and who feel that it is appropriate to let these uneducated sentences dribble out of their mouths.

It seems that feminism is slowly beginning to shed its stigmas and stereotypes. On college campuses, it is incredibly heartening to see the rise in awareness of true feminism.

At Elon University, we have seen a recent spike in on-campus organizations and groups advocating for the understanding of modern-day feminism. Recently, Elon Feminists led a photo campaign on their Facebook page titled “Who Needs Feminism - Elon University.”

To explain feminism to someone can often seem as complicated and unclear as explaining the meaning of life. Instead, it should be as simple as, “I believe in myself and I want to make the world a more equal place.”

To address some come misconceptions, let’s play two lies and a truth.

LIE: Feminists are advocating women to eventually overtake men in all power and leadership positions.

While for some this may be true, for most, we just want equality and for our work to be recognized. Merriam-Webster defines feminism as “the theory of the political, economic, and social equality of the sexes.” Notice it says equality, not domination of females.

LIE: Only women can be feminists.

Anyone of any gender association can identify themselves as a feminist. As long as you believe in gender equality and the improvement of women’s rights, I don’t see why you shouldn’t be able to categorize yourself as a feminist, regardless of your genitalia.

TRUTH: The goals of feminism need to be shared.

People need to understand feminism, and what it is truly about. Instead of promoting ignorance, promote intelligence and information.

Josh Kaufmann, an Elon sophomore, is proud to be a male feminist.

"To me, feminism is about equality, it is about breaking down the societal construction of a patriarchal society and advancing social freedoms," he says. "I am a feminist because I believe we need that advancement and that society needs to catch up with the times and expand its horizons. The only way to go is forward and it's time we start and keep on moving."

A great place to start this is on college campuses. As we explore the world away from our families, we begin to form our own views and opinions. We need groups on campus to help us explore these new ideas that are floating around our heads.

The new surge of awareness of feminism at Elon is, hopefully, only the beginning.

Elon needs to be educated about feminism. Whether or not everyone agrees with it is fine, as long as the idea of feminism is accepted and understood.

EFFECT, Elon Feminists For Equality, Change and Transformation, is working to do just that. They have launched the “Who Needs Feminism?” photo campaign, produced the Vagina Monologues, raised money for Family Abuse Services in Burlington, held a Feminist Banquet with faculty and staff and donated to CrossRoads in Burlington.

Feminist Delaney McHugo, an Elon sophomore, is a member of the Elon Feminists.

It’s time for society and, more specifically, Elon’s campus, to move past the stereotypes and stigmas. It’s time to correct the misrepresentations and pave the way to gender equality.