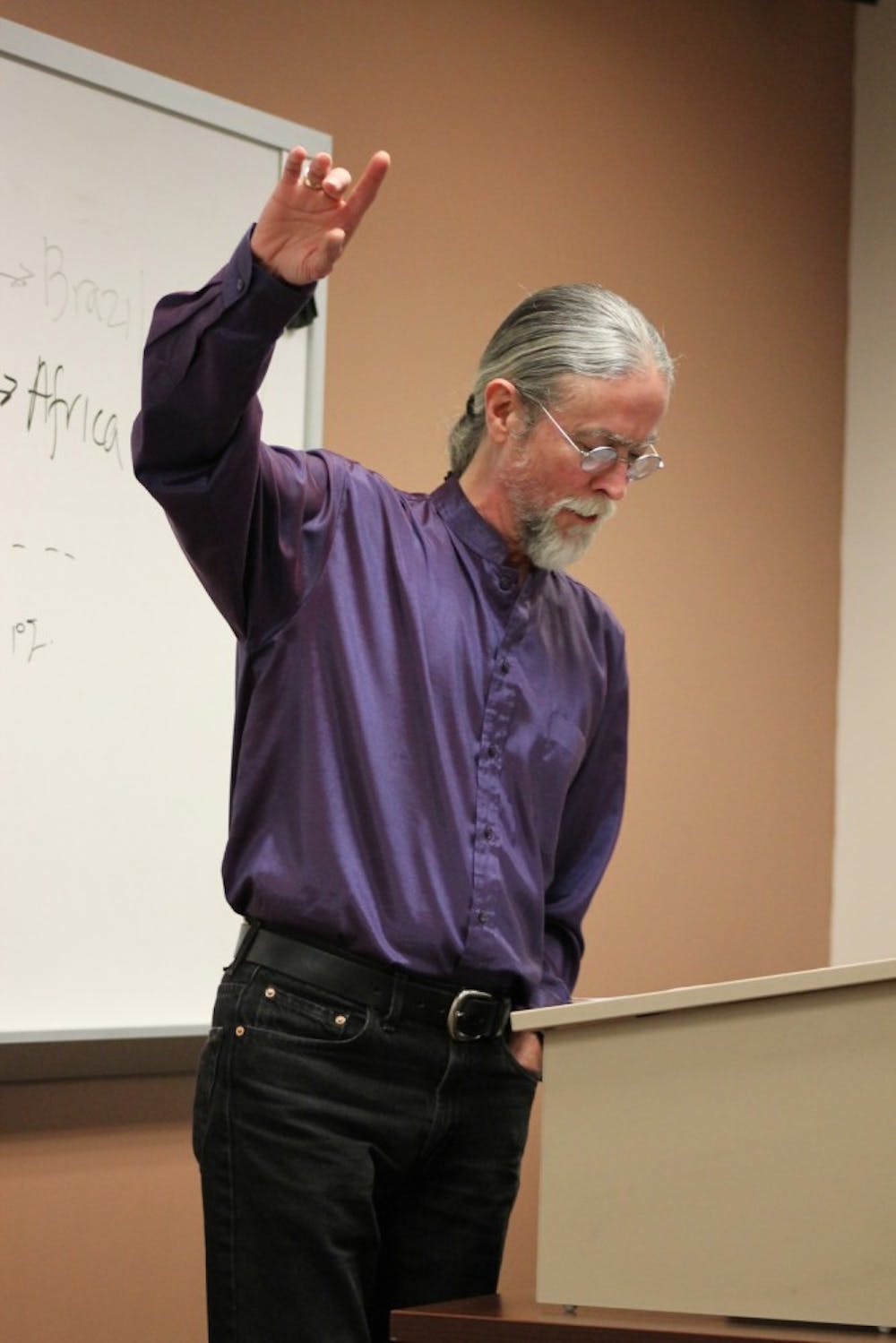 Russell came to Elon after seeing a poster in the student lounge at the University of North Carolina at Chapel Hill offering a teaching position at Elon. Photo by Ruth Gray, staff photographer.

He decided he wanted to be the next Hemingway while sitting in a laundromat. He abandoned his pursuit of becoming a Baptist preacher when his faith in God was shattered. His first job after graduate school, with two master’s degrees under his belt, was at a video rental store.

Now in his 20th year as a lecturer in Elon University’s Department of Religious Studies, Russell is a campus enigma. His long, silver hair is pulled into an impressively neat ponytail. He is not “Mr. Russell” to his students or colleagues, but simply “L.D.” He enters his classroom with a wry, mischievous smile and a deep-seated desire to spark stimulating conversation.

But the road to Russell’s fruitful career at Elon has been a bumpy one. It has become a story he is almost hesitant to tell, given its countless twists and turns. And if things had gone as planned, Russell would currently be a preacher in a Baptist church.

Russell’s religious background was almost predetermined for him.

“Growing up, there were not a lot of choices in a small Southern town,” he said. “At the end of the street we lived on, if we had turned left, we would have become Methodists. But we turned right and we became Baptists, so I grew up in a Baptist church.”

The small town of which Russell speaks is Union, S.C., where he was raised. The son of a textile worker and a stay-at-home mom, Russell – Larry Dean Russell, a name he has since shortened – found himself surrounded by religion in a way that sometimes bored and confused him. He was unsure of what he wanted out of life. He became a self-described hippie during high school. What is often a turbulent time for adolescents was no different for Russell.

“Here I am, 16 years old, and I’m trying to figure out who I am and who I want to be,” he said. “I’m experimenting with drugs and just not sure about what I’m doing.”

But during a weeklong beach trip with his church’s youth group, Russell found peace of mind. He found himself almost involuntarily letting go of emotional baggage. During the final church service of the trip, Russell was called to the front to accept Jesus Christ as his savior, in front of God and all of his friends.

He tried to fight it.

“Sixteen years old, I did not want to do that,” he said. “But this is the mystical part of it that I still don’t fully understand: I couldn’t not go down there. It was as if a force greater than myself pulled me to the front.”

Unbeknownst to Russell, his steps toward the front of the church that night represented a path he would follow for the next several years. He was admittedly intrigued by the Christian way of life because it provided a life plan that was solid and unwavering.

When he reached his pastor at the front of the church, everything changed.

“As soon as I got to him, I just burst into tears,” Russell said. “I grew up in a chaotic household, and there was a lot of turmoil both around me and inside of me. Just to let all of that go, it was such a liberating experience. I wept for a solid hour. And it changed me.”

For a number of years, Russell knew where his life was headed. He followed a straight and narrow path of Christian living. What is now a long ponytail was once a short, neat haircut —a decision Russell says he made for Jesus. Life was simple. His life plan was in motion.

Then, his faith was broken.

After Russell’s college years, spent largely at Furman University, he attended Southeastern Baptist Theological Seminary in Wake Forest, N.C., where he pursued becoming a preacher. At long last, he knew where his life was headed.

But not long into his studies, Russell encountered a setback in his devotion to God: His mother’s father, Albert Wilson, died of a stroke. It was a crushing blow.

Soon thereafter, Russell lost his childhood pastor, the Rev. Hayne Rivers, a man who practically helped raise Russell and assisted him in buying his first car. He died of cancer.

Though Russell tried his best to keep up with his studies at seminary, a third event made him question everything. A professor from whom he had learned at seminary – the man who first introduced him to the problem of evil – was killed in a hit-and-run accident.

And just like that, Russell’s life plan was in pieces.

“I was going to be a preacher,” he said. “That’s what I wanted to do. What I felt I should do, really. And then of course, life happened. I would say that the original version of my faith was shattered. And there was a rebuilding process that went on. And so, when my childish faith in God fell apart, I just started exploring.”

A flurry of activity occurred in Russell’s life after he received his seminary degree and gave up his preacher dreams. He received a Master of Arts degree from Wake Forest University and attempted to complete a Ph.D. at the University of North Carolina at Chapel Hill.

“I began to realize, in that grueling process of graduate studies, that my desire was not to know everything about one particular thing so much as it was to know something about a lot of things,” Russell said. “I wanted to go for breadth as much as, if not more than, depth. And it was a huge decision. I did not finish the Ph.D.”

Instead, Russell went back to the drawing board. He took a job at a video store to pay the bills but knew it wasn’t his calling. Deep down, he still dreamed of being a writer, a career decision he’d made after college while sitting in a laundromat reading a short story by Ernest Hemingway.

“I thought, ‘This is what I want to do,” he said. “I want to be able to write like this. To enable other people to see and feel what I see and feel, but to experience it in a different way.”

But bringing the American Dream to fruition was no easy task. Prior to attending graduate school, Russell had a few short stories published but otherwise found himself struggling to break into the business.

The process was gratifying nonetheless.

“The writing itself became its own reward,” he said. “It was a way for me to process so much of my own experience and to explore the world.”

Russell’s passion for writing and learning eventually set him on a new path, one that ultimately led him to Elon’s doorstep.

Elon was by no means Russell’s first stop on the journey to teaching. He got his foot in the door as an administrative assistant for Duke University’s philosophy department. Serendipity brought him to Elon, when, during his Ph.D. pursuit at UNC, he saw a flier in the student lounge that offered a teaching job in Elon’s Department of Religious Studies. It was only one course, and his first-ever class did not go well.

But Elon kept Russell on board. He ended up teaching four classes a year for 10 years while maintaining his job at Duke. He wanted more from Elon, but it didn’t seem in the cards.

When it seemed time to give up hope, a full-time teaching position opened up at Elon. A twist of fate and support from colleagues landed Russell the new lecturer position in the Department of Religious Studies.

[quote]What I want to see is students...who really work for the common good...It’s a lifetime thing. It’s not just a job. It’s an adventure. -- L.D. Russell, lecturer in Elon University's Department of Religious Studies[/quote]

“That was done for a number of reasons,” said Toddie Peters, chair of the Department of Religious Studies. “He had been a dedicated teacher and committed to the department, and because he had such a good rapport with students. For the contribution that he could make to our teaching staff, some of us pursued that avenue and went to the dean and made that case to have him.”

The backing he received from his co-workers did not go unrecognized by Russell. To this day, he says he cannot express his gratitude to them for getting him the position.

“At the first faculty meeting of the year, the newbies are introduced,” he said. “My friend and mentor, Dr. Jeffrey Pugh, introduced me to everybody. I said something along the lines of, ‘I’m not the kind of guy who says this kind of thing, but dreams really do come true.’”

A class with Russell has an unorthodox setup. His students are not students, but a tribe. Each lecture begins with a recitation of song lyrics, often from the rock ‘n’ roll genre Russell favors. He is laid-back. He lets the students do the talking.

But it wasn’t always that way.

“When I first started teaching, I basically read from my notes,” Russell said. “And back in the day, that was a much more common style than it is today. Elon is famous for not being that way.”

What changed? For Russell, it was the realization that students should be taught as human beings instead of empty minds that need to be filled.

“Everyone contributes. Everyone brings something to the table,” he said. “One of the things that I tell students is, ‘How can I help you?’ And not just while you’re in my classroom. Once a tribal member, always a tribal member.”

Senior Evan Bonney can attest to the effect of Russell’s teaching style. Bonney took Russell’s introductory religion course last fall and says Russell’s influence on him will undoubtedly be lifelong.

“He gave me a new perspective on religion, one which will grip me forever,” Bonney said. “Down the road, his character and teachings will be the easiest things to recall because they hit a part of your heart that sticks with you for the rest of your life.”

In the end, that’s what Russell says is his goal: to forge relationships with students that last well into their postgraduate years.

“What I want to see is students who go out of here into the world, not just to be selfish, money-making, stuff-collecting consumers, but who really work for the common good in whatever way they find fits them,” he said. “It’s a lifetime thing. It’s not just a job. It’s an adventure.”