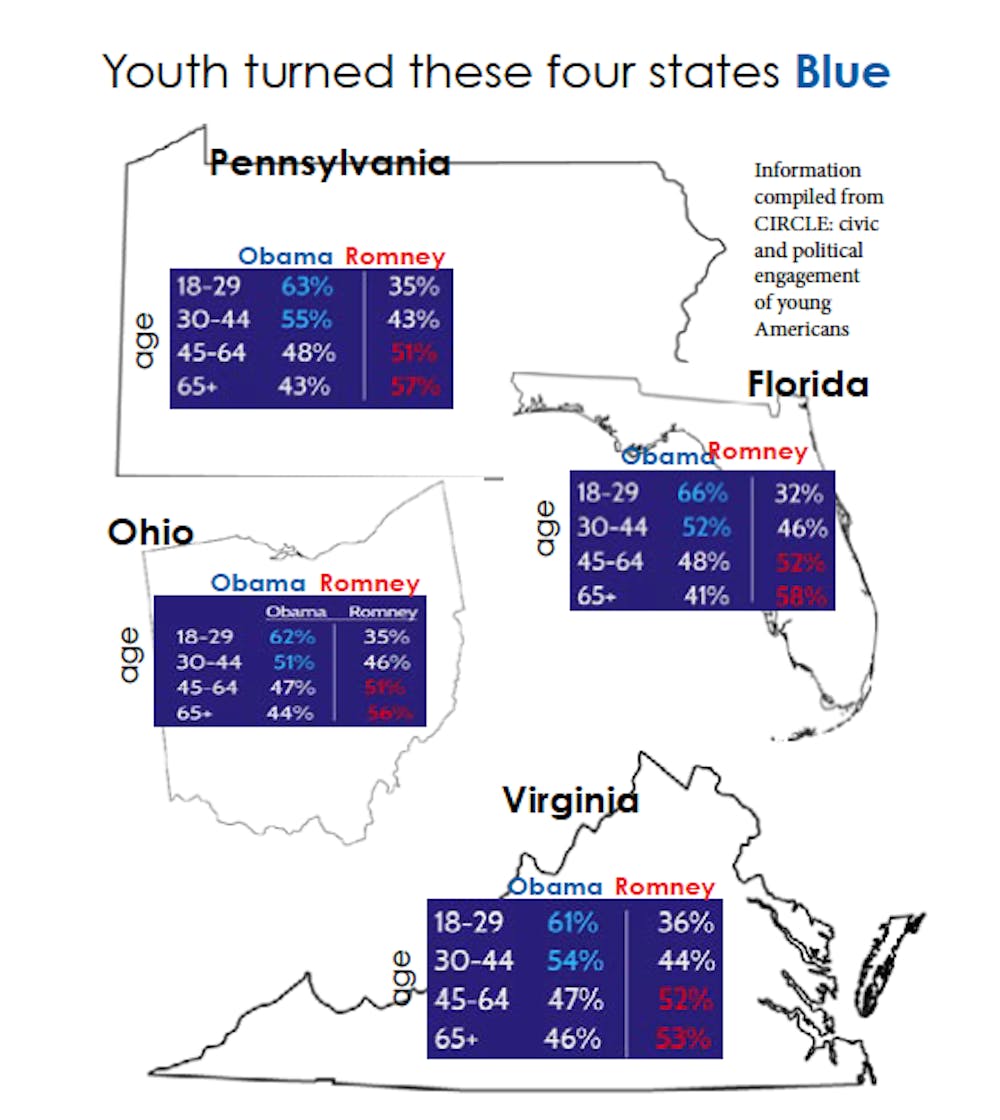 Younger generations have historically voted in fewer numbers, but the recent elections have witnessed a climb in young voter turnout. President Barack Obama executed a campaign that swallowed voters into the political sphere, and young voter turnout has increased in 2008 and 2012.

Young voters are characterized as voters in the 18-29 age group.

“We have more at stake in these issues than any other generation,” said Andy MacCracken, executive director for National Campus Leadership Council (NCLC), an organization designed to connect student government presidents to national leaders.

Prior to the election, Kenneth Fernandez, director of the Elon University Poll, predicted voters would be less enchanted with Obama. But young voters represented 19 percent of all those who voted this election, an increase of 1 percentage point since the previous election. Nevertheless, the percentage of young voters still falls below the national average for all voters. In contrast, the percentage of voters older than 65 exceeds that of national voter turnout.

Voter turnout among those 18-29 reached 52 percent during the 2008 election, with an estimated 23 million casting a ballot, according to the Center for Information & Research on Civic Learning & Engagement (CIRCLE). In 2012, the number of active young voters increased to 53.7 percent of the young voter population.

“Students matter and they matter not just because they’re the leadership of tomorrow, but it speaks to the effect that we are future homeowners and future employers and future retirees, so it’s important for students to vote,” MacCracken said.

The allure relies on his novelty, according to Fernandez.

“Turnout was higher in 2008 (compared to previous years),” he said. “Why? Barack Obama was younger than the average presidential candidate, he is African-American. That brought a lot of news and attention.”

Nevertheless, Fernandez argued that the public’s enchantment with Obama has diminished.

While voter turnout increased, the percentage of young voters who cast a ballot in favor of Obama decreased 6 percent.

According to an Elon Poll conducted in August, 36 percent of likely voters 18-30 years indicated they were “very excited” about the upcoming election, a percentage that lags behind every other age group examined.

But the increase in young voter turnout during the 2012 election proves enthusiasm is not a direct indication of engagement.

“Young people are enthusiastic about making a change in our community and anything that says otherwise is misinterpreting what that level of enthusiasm is,” he said.

“The traditional definition of political engagement is shifting with our generation,” MacCracken said.

While members of the organization aim to increase voter registration, civic engagement is not limited to voting, said MacCracken, who traveled to various colleges in the United States to advocate for political activity and to observe student initiatives. His observations of various campus communities show students embrace a more holistic approach to civic engagement.

Although there is evidence of increased political activity among the young voter population, the age group still votes at a rate less than those of other age demographics.

“Young voters represent a voting block that is basically untapped because younger voters vote in fewer numbers than anyone else in the nation,” said Sharon Spray, chair of the political science department and associate professor.

Fernandez attributed the low level of young voter participation to their busy schedules and general detachment from the areas in which they live.

“In many places, young voters may be new to an area,” he said. “If you’re an Elon student and you moved from Georgia or from Maine, you’re not going to be connected to the governor, the state legislature or the mayor, all of which really create an emphasis to vote.”

Elon University freshman Meghan Slattery, who said she did not believe she was knowledgeable enough about the candidates to vote, exemplifies Fernandez’s declaration. Although she observed her suitemates’ enthusiasm, she said she did not have enough spare time to learn about the election.

Power of the youth vote

Nevertheless, attracting this demographic has contributed to Obama’s victory during both the 2008 and 2012 elections. According to research conducted by CIRCLE, the youth vote caused 80 electoral votes to swing in the president’s favor during the most recent election.

The Center suggested Ohio, Florida, Pennsylvania and Virginia would likely have been counted among the red states had Obama not received overwhelming support from young voters.

“The mobilization of the vote can have a great impact for any of the candidates,” Spray said.

More recently, young voters have leaned Democratic, according to a poll conducted by the Pew Research Center for the People and the Press.

In 2008, 53 percent of all voters cast their ballots in favor of Obama, in comparison to 66 percent of young voters who supported the Democratic candidate. This past election exhibited a similar divide in young voter preferences, with 60 percent voting for the president, compared to the 39 percent who cast a ballot for Romney.

As a result, Fernandez said expanding one’s voting base has proved to be more influential than persuading the small margin of undecided voters.

Student organizations orchestrated activities related to the election season, and the university partnered with TurboVote, a nonprofit organization designed to increase voter registration and facilitate requests for absentee ballots.

“This type of program helps students immensely because only 17 percent of our students are from North Carolina, and so this makes it easier for them to navigate the waters once they get here,” Spray said.

As of Election Day, 1,005 individuals registered to vote through TurboVote on campus, and an additional 1,168 requested an absentee ballot using the online resource. Of those who used the tool, 98 percent were under the age of 30.

Additionally, the Politics Forum was founded with the intention to provide a place for discussion in a space not affiliated with any political organization, according to junior Greg Honan, the founder and president. Honan designed the Politics Forum to facilitate discussion about international and domestic politics and to host panels that advance these conversations, he said.

“You don’t find that much in the real world,” she said. “You don’t find people who are willing to engage on issues with an intellectual bias without it bifurcating a relationship.”

College is a place to grow intellectually and share ideas, which allows for students to gain insights into both political parties, Patterson said.