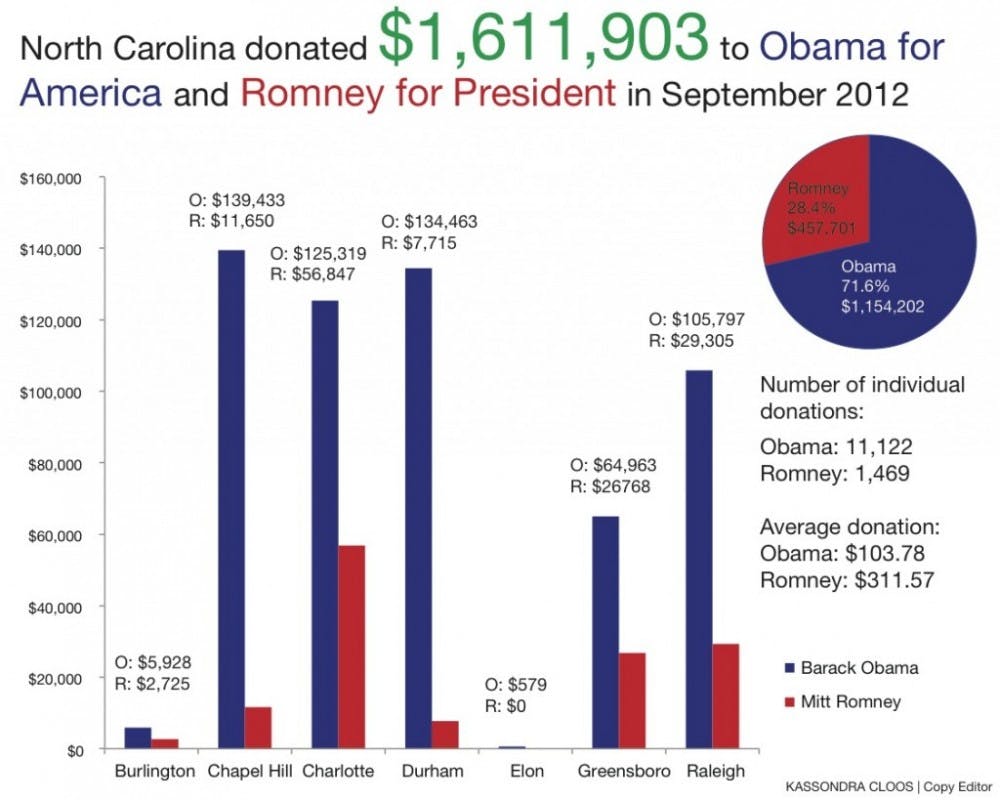 Time’s running out, but the cam- paigns for President Barack Obama and Republican candidate Mitt Romney have not stopped fighting for their shares of electoral votes in the swing states.

North Carolina is one of the battle- ground states that’s been pegged as “lean- ing Republican,” but there’s no way to tell which way the state will actual- ly vote until tomorrow, Election Day.

If campaign donations were any indica- tion, Obama would take the state by a land- slide, as he raised more than $1.1 million here in September alone, while Romney pulled in less than $500,000. But the most recent Elon University Poll, released Oct. 29, found vot- ers were evenly split 45-45, with 5 percent still undecided. And it’s that small, undecided minority that’s going to ultimately decide

who gets North Carolina’s 15 electoral votes. Charlotte was Romney’s biggest donor in September, giving almost $57,000, accord- ing to data from the Federal Election Commission. But the same city gave Obama more than twice as much, forking over about $125,000. Only Chapel Hill and Durham outshone Charlotte’s efforts, giving Obama nearly $140,000 and $135,000 respectively. The local community’s money has been largely going toward Obama, too, with Elon, Burlington and Greensboro giv

ing their dollars to Obama. The Town of Elon didn’t give a cent to Romney in September, and contributed $579 to Obama. But even when playing with such large sums, it’s not safe to say Obama will secure more votes. Jeff Colbert, an adjunct instructor of political science, said campaign contributions aren’t always an accurate measure of support. “It certainly indicates a level of enthu- siasm,” he said. “It’s hard to imag-

ine, for example, someone who would write a $25 check and would not go to the polls to vote, or would not tell people they’re supporting a particular candidate.”

Even though it’s still too soon to call, Colbert said North Carolina has a long tradition of vot- ing Republican in presidential elections, and he thinks Romney will win the state this time.

“Certainly, the Democrats hoped that Obama would be the beginning of a trend to North Carolina being a per- petual blue state,” he said. “But that seemed more hopeful than logical.”

North Carolina’s unemployment rate has been above the national aver- age, and Colbert said he thinks voters will consider that seriously when voting.

The way this election is going, with the candidates consistently neck and neck and 89 electoral votes still considered to be up for grabs, those 15 votes could make a major difference in the outcome of the election.