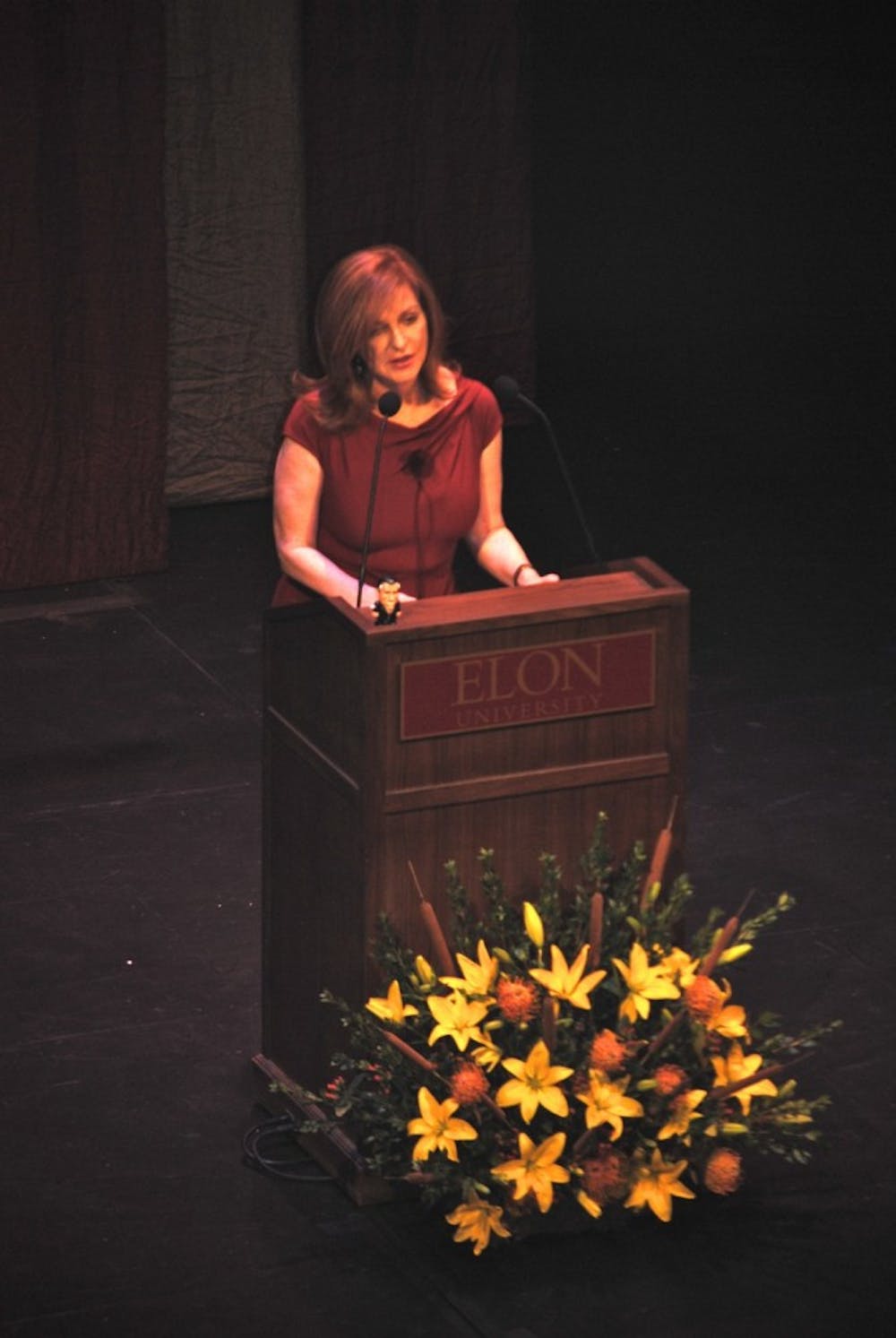 One day after the presidential election, New York Times columnist Maureen Dowd offered a psychoanalysis of the nation's leaders, relating the political arena to a theatrical display of family drama.

Dowd, Elon University's Baird Pulitzer Prize lecturer, turned attention away from the most recent political contest and instead emphasized how father-son relationships influence the behaviors of United States presidents.

"Presidential campaigns have an underlying paternal theme," Dowd said, referencing promises to protect the house against international invaders or a menacing financial situation.

The candidates continually compete to portray themselves as America's father, king or hero, according to the Pulitzer Prize winner.

The constructed narrative presents a nobleman's quest, a revered victory and a shared celebration with their constituents, she said. But, when Dowd questioned President Barack Obama about his heroic accomplishments, the United States' president identified his relationship with his father as his biggest battle.

"I'm surprised by how much time I've spent writing about fathers," said the political columnist.

Dowd has witnessed President George W. Bush's attempt to escape from the shadow of his father, has observed Mitt Romney's unwavering affection toward his dad and has recognized the extent to which the absence of Obama's father informed the president's route to the Oval Office.

"Obama's scattered upbringing accounts for his self-sufficiency," Dowd said. "That's why the president sometimes gets faulted for not thanking donors or people who work hard for him. He fiercely claims to the narrative that he made it on his own."

Meanwhile, George W. Bush, who Dowd simply refers to as W., designed policies to oppose the actions of the 41st United States president. She described their relationship as loving, yet competitive, casting W. as the "boy king" determined to eclipse his father.

"The desire to go from the screw-up son to the son who fixed his father's screw up informed everything W. did," Dowd said.

W. treated his father's presidency as a "reverse playbook." His rationalization for war with Saddam Hussein challenged his father's assertion that one nation could not unilaterally invade another.

The Romney family's dynamic contrasts that exhibited by the Bush pair. The 2012 Republican presidential candidate carried a piece of paper marked with "Dad" as a source of inspiration along the campaign trail.

But despite the contrast between the Bush and Romney family, the two sons share a commonality, she said. Both failed to match their fathers' enthusiasm.

"Sometimes the sons of famous men don't have any real reason to run other than to fulfill a presidential dream their more volcanic fathers failed to grasp," she said.

She criticized Mitt Romney's lack of passion and continued to condemn the Republican candidate for his antiquated views, which she described as more appropriate for the 1950s.

His policies no longer resonate with American ideologies, she said. She used popular culture to communicate the disconnect, equating Romney's platform to "a 'Mad Men' party in a 'Modern Family' world."

As a result, Dowd will spend four more years analyzing Obama, who she said she is still trying to decipher.

"Trying to get into the heads of powerful narcissistic leaders is like being the president's shrink," she said.

Her commentary supports an opinion the renowned journalist Bob Woodward once expressed to her.

"All presidents get the psychoanalysis they deserve," she said, quoting Woodward.