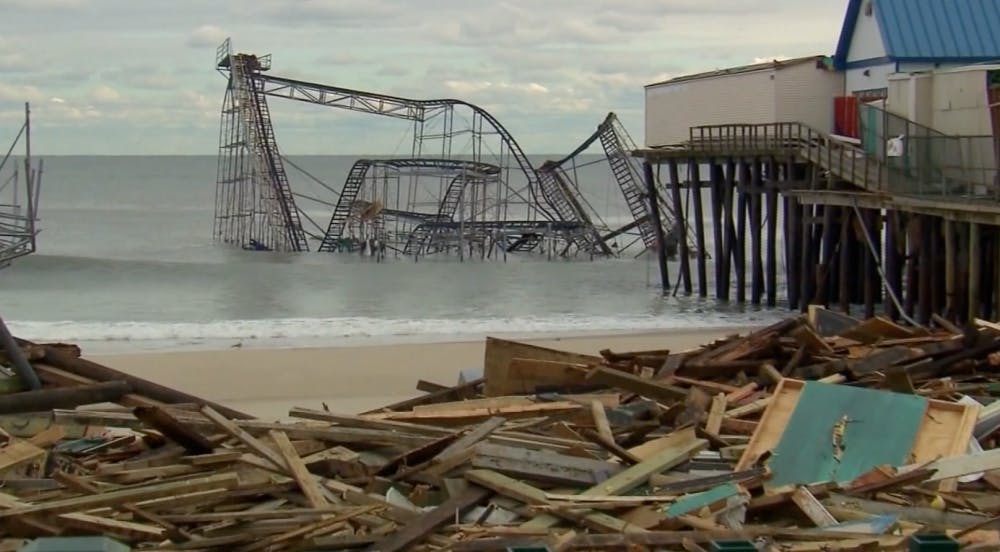 It's been an exhausting, devastating week for many in the Northeast United States. Superstorm Sandy blew in last Monday night killing 111 people across 10 states. The storm wiped away many homes, the majority in New York and New Jersey. Thousands on the East Coast are still struggling to get by after the storm.

Sophomore Eve Clausen lives in Millstone, New Jersey, which was hit hard by the storm.

"It's completely destroyed," she said. "The boardwalk is ripped up. There are boats on the street. It's crazy."

Elon may have been free from damage, but once the pictures and stories from the northeast rolled in, it was easy to see how Superstorm Sandy affected the homes and lives of some Elon students.

"The past three days have been full of bottled up nerves and anxiety," said Sophomore Kelsey McCabe from Long Island. "As soon as you get that text message or Facebook message and you know it's OK, you can take a breather. But at the same time, it's far from over."

"I've had sleeping problems and just been up with anxiety," she said.

Superstorm Sandy could be one of the Nation's costliest disasters ever. CNN reported that the storm will have an economic impact estimated to be as high as $50 billion. And for some students, that means it's time for people to respond.

"Awareness isn't good enough anymore," Clausen said. "Now we have to start taking steps. And it can't just be people up north, it has to people down here who help and come up with solutions to rebuild."

At Elon, an Interfaith vigil was held Friday to remember those who are suffering because of the hurricane and who had devastating losses. And students like McCabe, who heard about the damage, knew they could help even while on campus.

"The day after, I said let's do something," she said.

McCabe reached out to classmates and administration to try to organize ideas for relief efforts. She said she hopes to have one event organized soon and knows she and other students can make a positive impact.

"For all of my family who's lost a lot, it's meant a lot to them already," McCabe said.

There are several ways students can get involved on and off campus to provide support for those affected by Hurricane Sandy. Smith Jackson detailed some options to aid the relief effort:

-Habitat for Humanity and Students for Peace & Justice are co-sponsoring a bake sale until Nov. 8, in the Moseley Center. All the money collected will be donated to the American Red Cross Hurricane Sandy Relief initiative.