Maya Angelou recognizes the 'rainbow in the clouds' 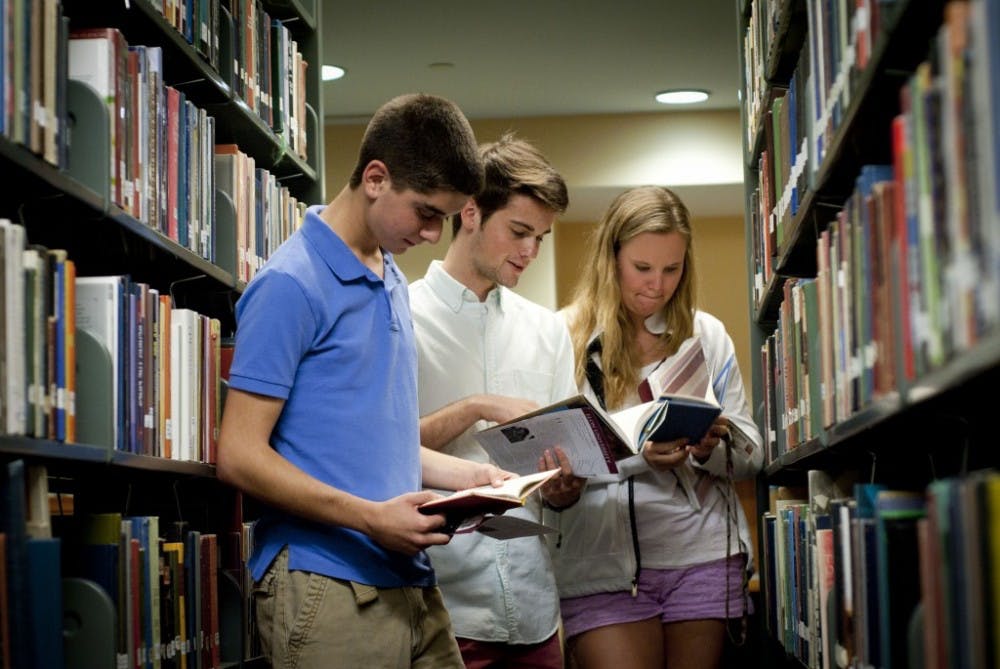 A standing ovation welcomed Maya Angelou to Elon University as she emerged from the behind the curtain and captivated the filled auditorium.

"God put a rainbow in the cloud," she sang into the microphone, punctuating the last note with a light laugh.

Although the melody derived from a 19th century folk song, she explained the significance of the rainbow originates from a Biblical story.

"We are told in Genesis that rain had persisted so relentlessly we thought it would never cease," she said. "To put people at ease, God put a rainbow in the sky."

The enlightening symbol of the rainbow reappeared throughout Angelou's speech at Fall Convocation, titled "An Evening with Maya Angelou," 7:30 pm. Oct 4 in Alumni Gym at Elon University.

"I live in this state, and this is the first time I've been invited here," she said with a laugh. "It is my blessing to give the convocation at Duke 23 years, every year, and now at last," she said. "At last," she sang. "I'm at Elon."

Looking out at the audience, she praised the university's growth and the promise its education offers each person.

"When coming to Elon, I thought of the rainbow in the clouds," she said.

Although clouds typically obscure light, placing a rainbow in the darkness illuminates an individual's potential, she said.

She recounted tales of poet William Ernest Henley's healing effect on her son while 100 stitches were removed from his back following his fifth spinal surgery and her paralyzed Uncle Willie's impression on one of the general store employees.

"I had to look at Willie: black, crippled, poor," Angelou said. "A rainbow in somebody's cloud."

When Angelou returned to Arkansas for Willie's funeral, the mayor of Little Rock thanked Angelou for her uncle's contributions to the country. When the man was young, Willie had given the future mayor a job in the family's general store and taught him his timetables.

"'He told me I had to love to learn to be important, not just to myself, but to my mother,'" Angelou said, repeating the words the mayor shared with her.

The day after her meeting with the mayor, Angelou found eight white men in the lobby of the hotel. She remembered growing up in Stamps, Ark., and "The Boys" would evoke fear among the black population. Nevertheless, these men carrying guns were prepared to protect her on her way to the funeral.

For Angelou, the change in racial relations illustrated her uncle's import.

"I still look back at Willie, his influence, his impact," she said. "Amazing."

She also emphasized the inspiration intrinsic in poetry. At the age of seven, Angelou became mute, believing her words could hurt people because her rapist was found dead after she revealed his name. During that time, she found comfort in literature.

"During those years when I wasn't speaking, there was a lady in my town, Mrs. Flowers, who took me to a library and said, 'I want you to read every book in this library,'" Angelou said.

The young Angelou would memorize Shakespearean sonnets, African American poetry and the words written by Edgar Allan Poe. But in Angelou's interpretation of "The Raven", the classic poem inherited a hip-hop rhythm.

The first time she heard the poem recited aloud by an actor "who took a Shakespearean stance," Angelou thought to herself, "that's not the way the poem goes."

The poetry belongs to the reader, though, she said.

"Now I know poetry is written to liberate us," Angelou said, the words gently flowing through the room.

Education enhances humans as well. She celebrated the Elon students' academic endeavors and the value of constant learning. She repeated the words her grandmother had told her, which she describes as the best advice.

"When you learn, teach and when you get, give," Angelou said definitively.

She encouraged the students in attendance to adopt the same philosophy.

Although she challenged the audience members to appreciate the humanity of each individual, she had a more pointed request of those in Alumni Gym.

Angelou had an immediate impact on one student in attendance. Once Fall Convocation concluded, sophomore Daniel Sheehan followed Angelou's direction and checked out one of Angelou's poetry books from Belk Library.

"I was inspired because how she views poetry is how I viewed it my entire life and I've forgotten," Sheehan said. "It's time to revisit it a little bit, so I wanted checked out her book"