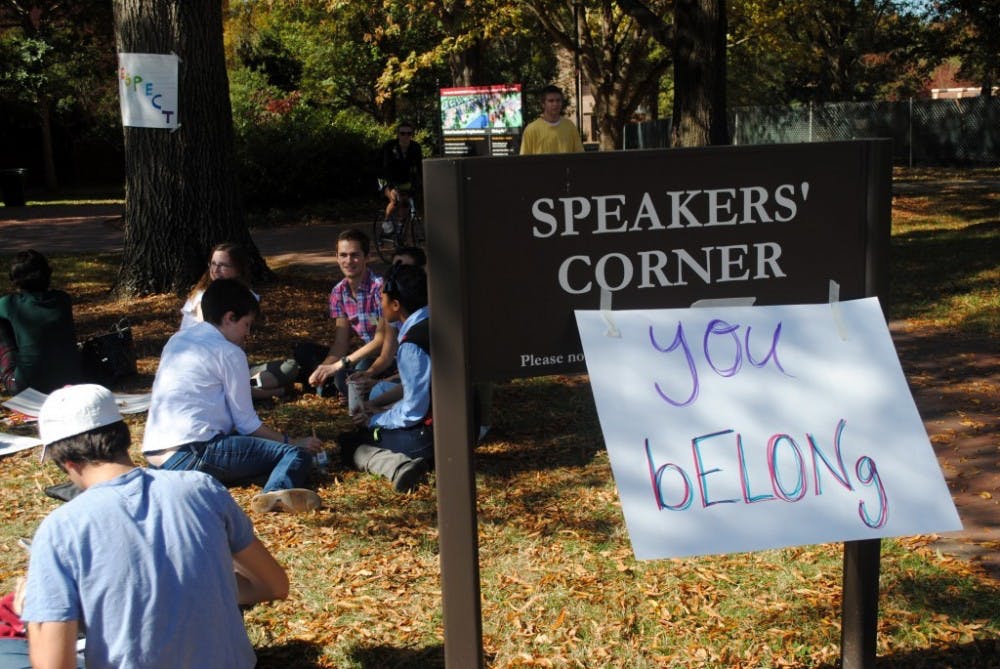 The day corresponds with a Student Government Association Senate  vote as to whether to uphold SGA Executive President Darien Flowers' veto of the resolution to terminate Elon University's relationship with Chick-fil-A. The debate will follow an open forum, scheduled for 7:30 this evening in Oaks 212.

"In light of the (SGA Senate) vote on Tuesday, we are encouraging all members of the Elon community to only eat at Chick-fil-A in Moseley," the Facebook page said.

According to the page, 283 individuals indicated they would participate in the event.

In response to the demonstrative support of Chick-fil-A, members of the LGBTQIA community congregated in Speaker's Corner and made signs that said "Respect" and "You bELONg."

"The fact that there is a group that is calling itself Elon Chick-fil-A Appreciation Day is troubling to me because they are using the name Elon as if it is an officially sanctioned event," said Kirstin Ringelberg, LGBTQ office coordinator and associate professor of art history.

Organizing in front of Moseley allows those who feel discriminated against to show their opposition to Elon University's business partnership with Chick-fil-A without initiating direct conflict with those who created the event, she said.

"It's one thing to say, 'I still want to eat Chick-fil-A,' but to do something this vocal is discriminatory, in the way that we are reading it," said Emily Kane, education and advocacy chair for Spectrum, Elon's queer-straight alliance, who stood in front of Moseley with other students, faculty and staff.

Nevertheless, not all students who elected to eat Chick-fil-A today were motivated by political reasons. Freshman Harris Fishman purchased food from the vendor because he was hungry, he said.

"I don't necessarily agree with the politics that are behind this whole Chick-fil-A fiasco, but I don't think it is worth not eating food I like," Fishman said.

But for Ringelberg, the chicken sandwich has become a symbol for individuals' values and the extent of their concern for the LGBTQ community.

"There are people who have been saying, 'I don't have any problem with the LGBTQ community, I just really like this chicken sandwich,'" she said. "I think if you can say that when you know how much our students, faculty and staff have been hurt by the symbolic representation of Chick-fil-A on campus, then it is not entirely honest to say that you care about us.

"There is a way in which the trust is revealed, and the truth is you really care about that sandwich or corporate rights more than you care about individuals on this campus"