Panel discusses effects of Amendment One on NC 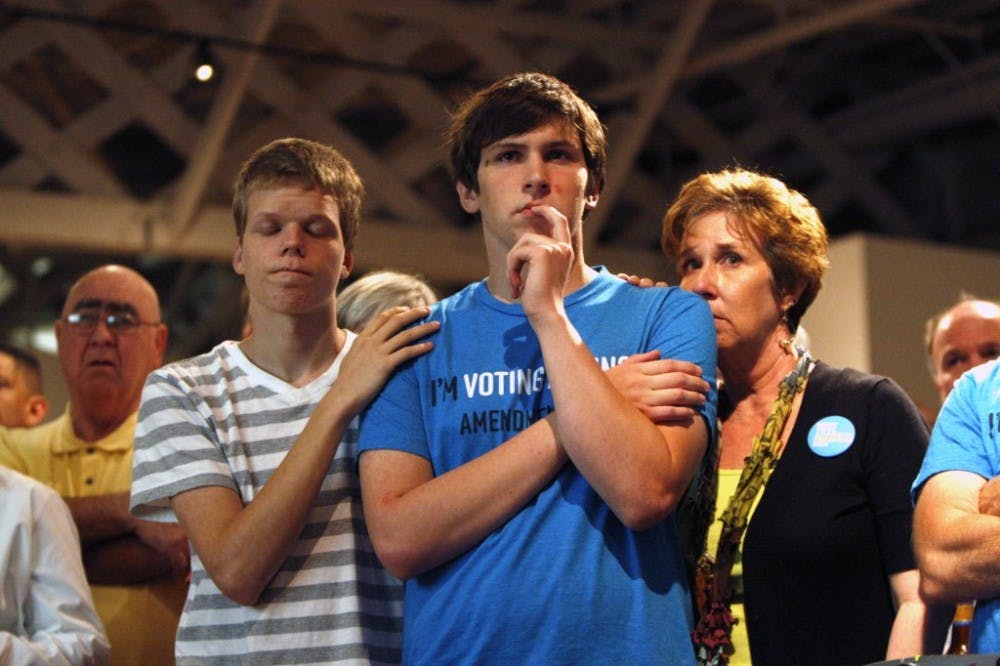 Elon men's basketball head coach Matt Matheny has lead the Phoenix to a plus-.500 SoCon record so far this season. Photo by Al Drago.

When Amendment One passed last spring, it was an emotional time for many. Elon University students, faculty and staff gathered Sept. 18 to discuss the ramifications of the legislation and what to do moving forward.

The amendment legally defines marriage as a union between one man and one woman and does not afford legal rights to any other forms of partnership. In the months that have passed since the vote, North Carolina has faced backlash from the amendment’s opponents throughout the country.

Political science professor Laura Roselle, who specializes in the study of media and politics, provided an analysis of last spring’s Amendment One voting results and discussed how the results affected North Carolina’s national image.

“A lot of people are framing North Carolina as a whole as a negative place,” Roselle said. “They are disregarding the 33 percent that voted against the amendment.”

Roselle’s presentation included a display of statistics, which indicated that North Carolina residents have become increasingly accepting of same sex marriage since 2011.

The passage of Amendment One was based largely on a low voting turnout from the amendment’s opposition, Roselle said.

Because such a low number of voters went to the polls last spring, the majority that passed the amendment constituted only 21 percent of the state’s total population, according to Roselle.

“I think this should explain why it’s important for people to get out there and get active in the process,” she said.

A lack of voter understanding of the actual effects of Amendment One contributed largely to its passage, according to Garza.

She said it was particularly frustrating to converse with her neighbors and learn they were voting for the amendment because their religious leaders had told them to. They had never questioned why, she said.

In the months that have passed since the vote, Garza has frequently been asked if there is hope for getting the amendment overturned. Though more than a three-fifths majority is required to overturn a constitutional amendment, it is not an impossibility, according to Garza.

“The only other way it could happen is if you have the perfect litigants go before the North Carolina Supreme Court and it is held that Amendment One contradicts the structural portions of our constitution,” she said.

Concluding her presentation, Garza encouraged the audience to be persistent in voting for equal rights for same sex couples.

Though Garza does not expect to see an immediate change, she remains hopeful that if proponents of same sex marriage continue to fight for their rights, there may be change in the future.

“Unfortunately, I think we’re going to be in this state for many more years,” Garza said. “But I hope we will eventually get to a place where the federal court has to deal with this issue.”