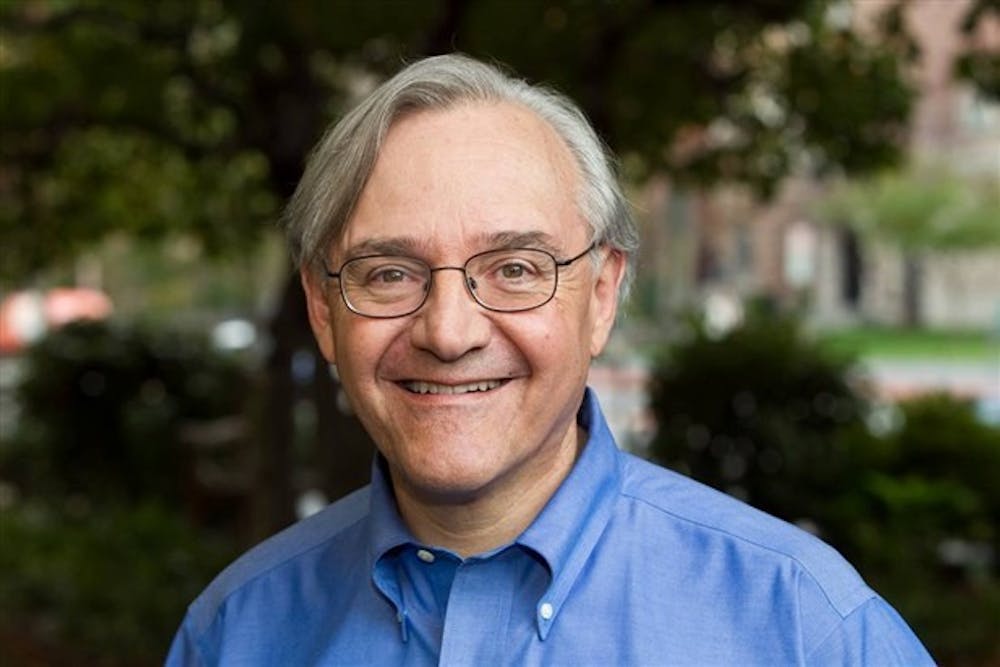 Washington Post columnist E.J. Dionne spoke about the lack of healthy discourse between political ideologies, which he describes in his coming book “Our Divided Political Heart,” to an audience of professors, alumni, local residents and students April 5 in Whitley Auditorium.

Dionne said he believes discourse has shifted so greatly in the United States that those who disagree on issues now believe opponents represent a threat to their own value system.

“In such circumstances, compromise becomes not a desirable expedient, but almost treasonous,” Dionne said.

Dionne came to Elon as part of the annual James P. Elder lecture series, which deals with the exploration of critical scholarship. Former students of Elder attended the event.

America’s polarized environment, Dionne said, creates an uneasy feeling that the country is headed toward decline.

But, Dionne noted, while history suggests the United States should be more confident about its future, there are significant challenges facing the nation.

“We are right to feel that traditional paths to upward mobility have been blocked, that inequalities have grown and that the old social contract, written in the wake of World War II and based on shared prosperity, has been torn up,” Dionne said.

Dionne attributed the lack of reasoning in the country to a lack of balance.

“We have forgotten that the tension at the heart of our national experiment is a healthy one,” Dionne said.

Dionne pushed for a return to an understanding that the American ideals of individualism and community go together, a period he referred to as the Long Consensus.

“Private initiative and public enterprise complement each other,” Dionne said.

The two function cooperatively to make the United States became the most powerful nation on earth, he said.

The lack of consensus, as Dionne observes it, comes from new efforts by conservatives to focus on individualistic ideals, as well as a distrust of government, he said.

“Right-wing groups concluded that government was no longer the realm of ‘us,’ but was, in fact, under the control of ‘them,’” Dionne said.

Dionne added that the Occupy Wall Street movement has acted similarly, arguing that the government has alienated the people.

“Many came to believe that government had used the public’s money to strengthen and subsidize the already privileged,” Dionne said.

Dionne, a self-described liberal, noted that he is not attributing the disruption of consensus and dialogue in the country to conservatives, but to the new exclusionary conservative philosophy.

The task of returning to a period of consensus, Dionne said, falls to the current population of young men and women.

“I believe it is the task of the newest generation, to rebuild and refashion the Long Consensus to make the coming century as successful as the one we have left behind,” Dionne said.

After his speech, Dionne was asked who he thought would win the presidential election.

“If I had to make a bet right now, I’d put three-to-two odds on Obama, but I think that predictions are written on water in American politics,” he said.