Flight of the Phoenix cha-chas its way to nationals 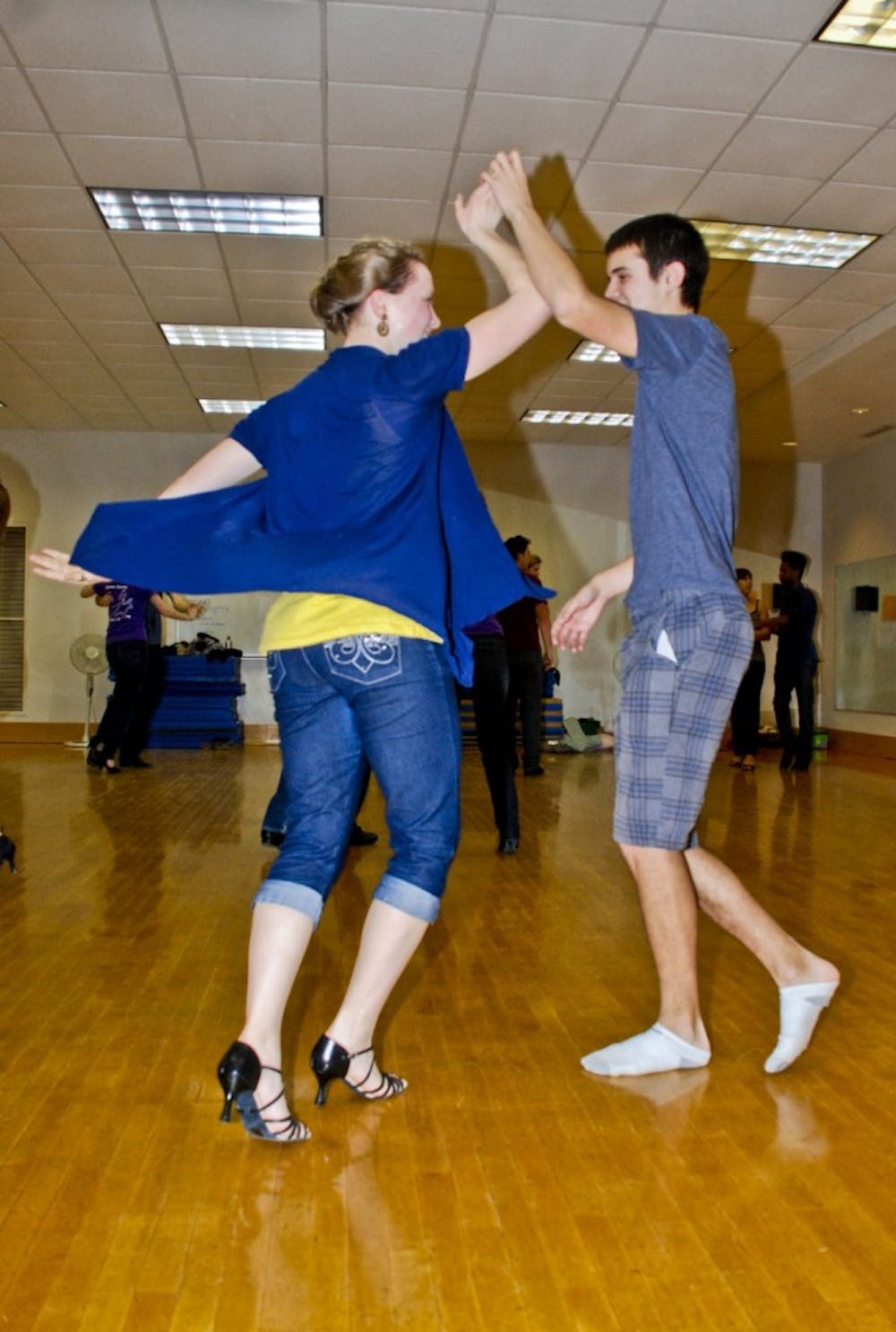 Adrian Perez and Hilary Leslie of the Flight of the Pheonix ballroom dancing team rehearse for nationals the 29th through March 1st. Photo by Brian Allenby.

Elon University’s Flight of the Phoenix ballroom dance competition team will soon showcase its rhythm on the dance floor on its first-ever trip to the National DanceSport Championships.

Freshman Caroline Medley, who has been ballroom dancing for eight years, is one of the team members in the first delegation Elon has ever sent to the national competition.

“This is the first year that couples on our team are going to nationals because of scheduling conflicts in the past,” said sophomore Claire Mauro, publicist for Club Dance. “Every two years, the national competition switches from Baltimore, Md., to Los Angeles, Calif., and this year, it is back on the East Coast.”

Flight of the Phoenix, which started competing in 2007 with only three couples, has since grown to 10 competing couples. All 10 couples qualified in at least one event in the national competition.

“In order to qualify, you must place in the top 75 percent of your category at a national qualifying event,” Mauro said. “We went to Bethesda, Md., and competed at the Mid-Atlantic DanceSport Championships the weekend of Feb. 25.”

“A ballroom competition works very differently from any other dance competition,” Mauro said. “Each level (including newcomer, bronze, silver and gold) competes separately in heats, with couples attempting to make it through quarter, semi and final rounds. In each heat, around 15 couples dance at a time while five judges score every couple on technique, patterns and performance.”

At the qualifying competition, there were four rounds during which couples were eliminated five or six at a time until only seven remained in the finals. Placements and ribbons are awarded to the final round of competitors, according to Mauro.

“When you see your number on the screen, it’s the most exhilarating feeling,” Medley said. “You see your number called back again and again, until you’re in the final. That last round that you dance, the pressure is on, the lights are hot, but you just have this feeling of freedom because regardless, you’re going to place and just placing is an accomplishment in itself, especially at nationals.”

Flight of the Phoenix is a completely student-led team. Mauro said many other collegiate teams hire professional instructors and coaches, but Elon’s competitive team has always been coached by senior members.

“Patrick Ma, Katie Brophy and Jordan Smiley have been the student coaches for the past two years and are very proud of all the couples for placing so well against other professionally coached couples,” Mauro said.

Medley said she has high hopes for the team's first national competition.

“We’re all really excited to be representing Elon at nationals, and we’re so glad that we’ve gotten such awesome support from the Elon community,” Medley said. “Everyone we’ve talked to about going to nationals has been really supportive and has wished us well, so we’re really grateful for that.”

The 2012 championships will be held in Baltimore from March 30 to April 1.