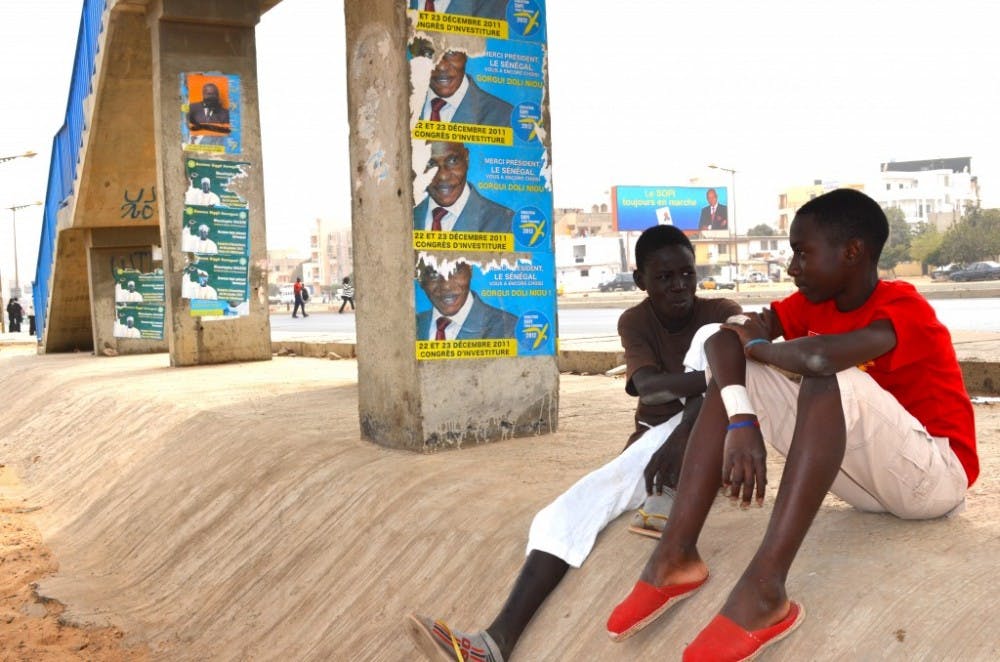 DAKAR, SENEGAL — Despite demonstrations from the opposition group, current president, Abdoulaye Wade, continues with his campaign for the 2012 Senegalese Feb. 23 presidential elections. Wade is running for a third term. Opposition groups say this violates the Constitution, which only allows a president to have two terms.

Groups including Mouvement Vingt Trois, or M-23, participated in multiple demonstrations to show their disapproval of Wade after the Constitutional Congress released the official list of the 14 candidates Jan. 17.

“The opposition is discontent with his social, health and education strategies,” said Billy Alfono, the assistant regional security officer of the U.S. Embassy.

Sergine Ndiaye, director of the Senegalese CIEE study abroad program, said Wade referred to the opposition demonstrations as a “breeze that will pass.”

“To refer to the loss of not only one life, but four, is heartless,” Ndiaye said.

The M-23 is a coalition of opposition groups and includes many musicians,  rappers and a youth movement known as the Y en a Marre.

“I share their philosophy, the Y en a Marre spirit,” Ndiaye said.

He said the group is not associated with any particular political party and has not endorsed a candidate in the 2012 election.

“The group’s saying is basically 'enough is enough,' or 'we are fed up.' Their purpose is to help create a new type of Senegalese citizen, a person who accepts responsibility and demands their rights,” Ndiaye said.

“It’s a political opinion only,” he said.

Mbengue, who works for Wade’s campaign, said the four deaths were not Wade’s responsibility.

“It’s regrettable, but the responsibility comes (primarily) from the opposition and after (from) the policeman,” he said.

Mbengue said Wade did not count his first term as president because of a law that Wade passed while he was in office.

Oumar Sow is a young voter also in support of Wade, despite a large youth population in the Y en a Marre.

“It’s not nice to demonstrate (against), burn tires and destroy the things of Senegalese people," Sow said. "If they disagree, burning things will not be useful to convince Wade not to run. You should show your opposition with your vote."

“Around Senegal, you see good infrastructure projects built by President Wade," Sow said. "He created a lot of factories in order to help the jobless. Since Abdoulaye Wade took the poll, Senegal is like Paris."

Sow has plans to help in the campaign.

“We are ready to bring back Wade, Inchalla! (God-willing),” he said.

But, Ndiaye said the majority of the Senegalese people disagree.

“Wade is a big manipulator. The events of June 23 showed Wade’s will to do everything possible to change the name of the game.”

In June 2011, Wade tried to pass controversial laws, including one that would allow a presidential candidate to be elected with 25 percent of the vote. Groups in opposition to Wade’s decision occupied the National Assembly in Dakar.

Since then, the M-23 has promoted the message: “Touchez pas ma constitution” or "don’t touch my constitution."

The campaign season for the presidential elections in the United States started more than a year before the election date. In Senegal, the campaign officially started Feb. 5.

“They have three weeks before the elections in which the candidates have, in theory, equal access to the media," he said. "One candidate will need to have the absolute majority, or over 50 percent."

If no candidate gets the absolute majority, there will have to be a second round. Ndiaye said he is still deciding between two or three candidates.