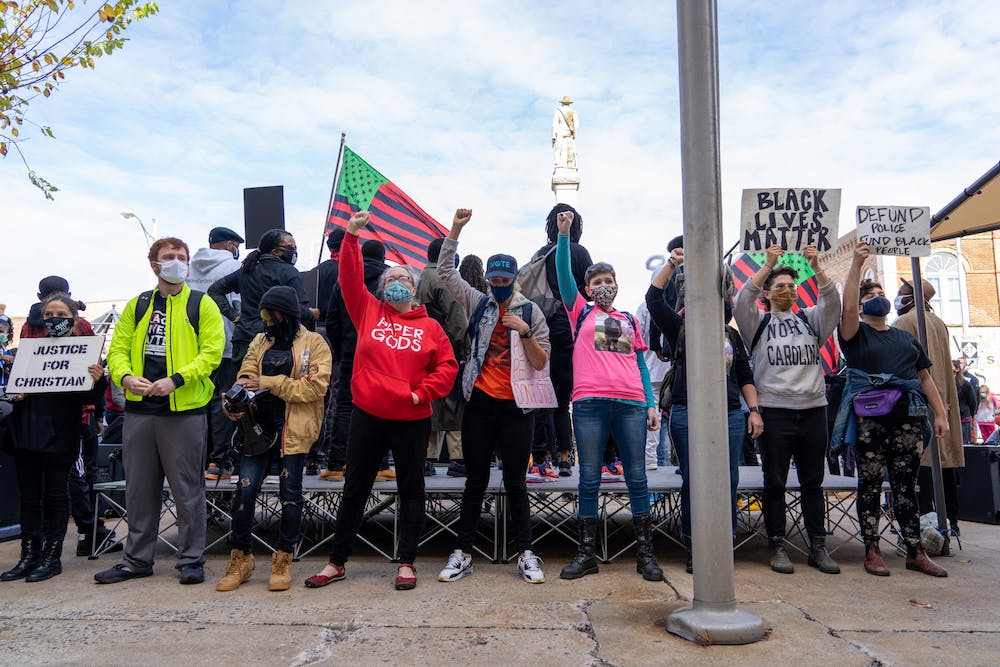 Photo by Clare Grant | Elon News Network
More than a hundred people gathered in Graham, N.C. for the I Am Change Legacy March to the Polls on Oct. 31, 2020. The march started at the Wayman Chapel Church and ended at the Alamance County Courthouse. What started as a peaceful march ended with aggression from the Alamance County Sheriffs which included pepper spray and taking marchers into custody.

The North Carolina Court of Appeals overturned a June 2021 order to release unredacted police body camera footage from the Oct. 31, 2020, “I Am Change” march to the polls in Graham that ended in the use of pepper spray and 23 arrests. The vote was 2-1.

Judge John Tyson wrote the court’s majority opinion that was released Dec. 29, 2022, and stated, among other reasons, there was a lack of compelling public interest to release the footage and doing so could pose a threat to the administration of justice.

In the case brief, Tyson wrote that police recordings are not automatically public records, and only petitioners with personal interest — being in a video or representing someone in a video — have cause to have access to police footage.

Kristofer Loy, an activist from Graham, marshaled at the “I Am Change” march for the Rev. Gregory Drumwright, who organized the march and was arrested. Loy said that the release of footage from the march is necessary for accountability from the Graham Police Department.

Loy said officers at the march were “extremely aggressive.” During the event, his role was to keep the crowd under control. Loy said that when video footage was released, he was able to hear officers discussing the use of pepper spray during the nine minutes that marchers kneeled at the county square.

“You could hear the cops over their radios, ‘As soon as nine minutes hits, if they're not up on their feet, tear gas ‘em,’” Loy said.

Ann Jones, a Graham resident and activist at the march, said that there had been a peaceful march in July 2020 for unity in Graham, so she had expected the same outcome in October.

“I was not expecting to meet tear gas or chemical agents on that day,” Jones said. “It was peaceful. Everyone had knelt down and we had done a prayer, a moment of silence. Some people, and older people too, had gotten down on their knees.”

“It was like a war zone. I could hear people yelling, but I couldn't see them because of the chemical agents that were in my eyes and in my lungs,” Jones said.

Graham Police Department said in a statement that a “pepper based vapor” was used on the ground as a crowd control measure, but both Loy and Jones said that officers sprayed directly at marchers.

Loy said Graham residents have little faith in the Graham Police Department and Alamance County Sheriff’s Office and the withholding of this footage has only contributed to this lack of trust.

“I think if it isn't released, a lot of people are really going to lose faith in even the idea that the system can deliver justice,” Loy said.

Jones said not releasing the footage from the march has contributed to the deteriorating relationship between the Graham community and its police department.

“It doesn't place a lot of trust in the police within this community,” Jones said.

She also said that as a taxpayer in Alamance County, she expects access to this footage since part of her taxes go toward funding the police department.

“We shouldn't even have to go to court. They should voluntarily release that information,” Jones said.

The court decision can be appealed to the North Carolina Supreme Court or a hearing before the full 15-member Court of Appeals.

Loy said he believes that the decision should be appealed.

“The public in general has a right to see what happened that day,” Loy said. “I expect this body cam footage to be released, because this is a national event that happened.”